When Noah Hawley asked me to do Lucy in the Sky, I was very excited. He wanted to do a movie about a woman who had an experience that was bigger than her understanding and has come back to a world that’s smaller than she remembers. A movie about change and transformation after a journey to space.

Lucy begins the film in space, an emotional point of view of space, not the technical aspect—the feeling of impermanence and the scale that dwarfs her.

Noah was very clear that he needed a canvas for Lucy that expressed her emotional state. So everything from the color palette, to the details in the houses, NASA, the offices and training facilities, gardens and streets, was guided by the emotions that Lucy was going through. The story takes place in the year 2006, so the International Space Station was designed for that period, less sleek, a messy arrangement of equipment from different eras that overlap. I wanted to have a 1980s base shell with layers of decades in technology, massive bundles of cables and wires, but controlling the color palette of shades of whites and grays.

A few scenes inside the International Space Station, or ISS, were cut out from the final movie. The final film only has a dream sequence where it was cleaned up and Lucy, played by Natalie Portman, was hung from one side of the station in a translucent sleeping bag, as if she was about to transform like a chrysalis. The practical aspect of the ISS was very challenging, it had to be built in the same hangar where the NASA training facility was being shot, so the solution was to build the interior as the ISS in space, and the exterior of the same set as the ISS instruction module that NASA used to have at the Houston training center over fifteen years ago, a white tarp plastic shell and metallic solar blanket that had been used by NASA since the seventies.

To play slightly with the element of vintage, old NASA graphic murals were used in a few places around the locations and sets from the fantastic artist Robert T. McCall. Large prints and murals were placed in the cafeteria and in the arrival hangar. All of these elements were visions of life on the moon and celebrations of astronaut life.

The Houston training center was located in different locations on university campuses, a university pool and airplane hangars. Again, I tried to play with the original architecture of the Johnson Space Center (JSC) located in Houston. 1960s modern architecture, rigid lines, blacks, whites and blues, sharp shadows, a military feeling.

The NBL (Neutral Buoyancy Laboratory) was dressed in a swimming pool a tenth the size of the original. Three sides were dressed, and the fourth was added as a digital extension in postproduction. This was extremely challenging, as the scale of the original facility is massive. The location played as if the action was in one corner, where astronauts were generally lowered into the water.

I did try to stay loyal to the original palette of the existing NBL, introducing a bright yellow, very much present in many areas of the lab. The connection between the pool and the inside and outside of the control room was resolved by building a two-sided wall looking onto the pool deck. This wall was then also used for the control room set.

The director paid homage to the set for the NASA training facility by tiling a bird’s-eye view of the entire hangar. The audience can see the module for the ISS, the window to the world, the cockpit for the space shuttle and the generic training elements. Another challenging aspect of this movie was to recreate Houston in Los Angeles.

Many houses were scouted before finally finding a ranch-style house with a beautiful front yard without a fence, very much like the suburban communities near the Johnson Space Center. The landscaping was enhanced by adding greens from the area, including adding Spanish moss, to the existing trees.

When in her house and in her private life the lines soften out, the shadows are organic with plants, trees and flowers, and the palette is earthy.

There is a beautiful scene where Lucy’s husband is peeling off old wallpaper, stripes and rigid lines, to reveal the original wood-stencil decor, natural flowers painted on the wall (sometimes used in old houses in Texas and Virginia).

The house was repainted and vintage wallpaper added to maintain the warm color palette, in contrast with the cold palette of NASA, while the set decoration gave the interior a southern touch in the layered details of the house dressing. 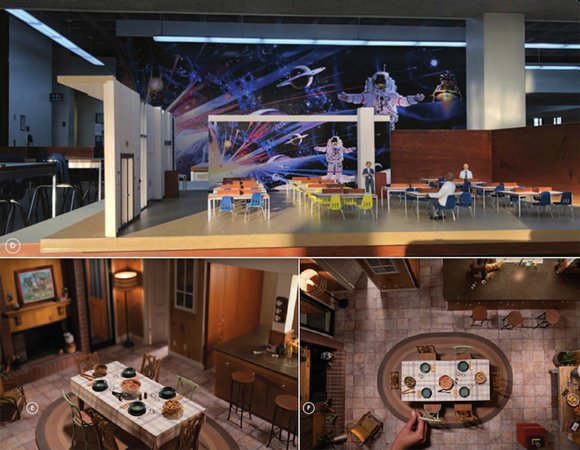 Another part of the film’s task was to communicate Lucy’s feelings of an introspective life crisis. Her view of life on Earth as getting smaller and suffocating. She was almost having an out-of-body experience watching her life from above, and that’s when the model of her environments came into play. There were two scenes that were chosen to show this experience.

The first was at her home while sitting at the dinner table with her family. Lucy starts to float above the table and the room as if seeing her life from space. To achieve this, a scale reproduction of the family dining room and kitchen was built. Within the scene, as Lucy rises up out of her chair, she leans back down into the scene and picks up what is now a tiny scale model of her dining chair, tying her back into the reality of family life.

The second scene was in the cafeteria at the Johnson Space Center, as she stares at her plate, feeling lost in the world now unfamiliar to her, feeling distant and outcast, she starts to float above the reproduced scale model of the cafeteria, and she watches as she sits stirring the fork in her plate.

Lucy’s spiritual guide in the movie is her grandmother, Nana. She raised Lucy, while be it in a bit of a military style, as an overachiever, and yet she still has a very important place in Lucy’s life. When Nana gets sick, this adds drama and stress to Lucy’s life, it feels like a dream, or a nightmare. 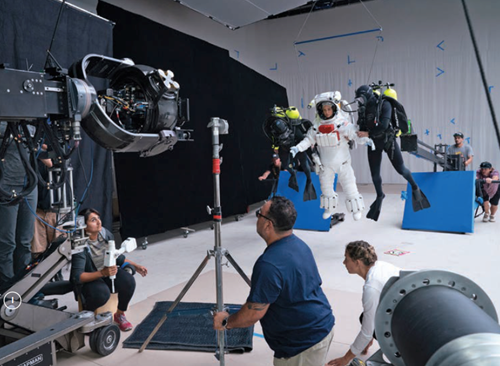 The movie has a very dramatic scene that is a turning point in the story. It shows the audience that Lucy is a resilient character and that she not only wants to just go back to space, but that also she does not give up easily or risk losing her opportunities.

During training in the Neutral Buoyancy Lab, her helmet has a malfunction and water starts to pour in. Instead of coming back to the surface right away, she decides to finish her job, putting her life in danger.

The stage was painted in light gray color to match the bottom of the NBL, with blue light and water reflections. Natalie learned how to move almost like a dance to show her zero-gravity body movements all while suspended by an intricate cable rigging system.

A piece of the exterior of the ISS was built to be used in conjunction with the drill and screws so her actions could be real. Dry for wet is an economical way to shoot scenes that happen underwater, putting less stress on both the actors and the crew. Visual effects water is then added in postproduction.

The End of the Story

Lucy eventually drives all the way to San Diego from Houston to win back her standing to go up into space. She wants to prove that women should not be exploited, or be judged just for their gender. However, she’s not in a clear state of mind, so a strong dangerous color was used for the final scene, a red corkscrew garage structure, very visual and unsettling, in the pouring rain.

A set piece of wall with electrical boxes and water pipes was built for her to climb and stand on safely. This allowed her to feel safe while completing the action, and allowed the camera to be on both sides of her without the need for full safety rigging.

Due to this break, she is arrested, which forces her to change her life and appreciate what she has here on Earth. The movie is about the journey of a woman that has been misunderstood and undermined all along. The film’s intention is for the viewers to take a journey with her, from her perspective, and understand her inner feelings.