The Umbrella Academy is a show about superheroes, but aesthetically it has a lot in common with two other Netflix genre series, A Series of Unfortunate Events and Chilling Adventures of Sabrina. As with the latter, it is based on a comic book series (written by Gerard Way and illustrated by Gabriel Bá), laying the visual foundation for the stylistic and timeless costumes.

Even though a large amount of the action is explicitly set in the present (flashbacks and flashforwards are also utilized), you could be forgiven for thinking this is New York of the past. Or at least certain characters look like they have been pulled from another decade; the clothing by costume designer Christopher Hargadon mixes contemporary pieces with a strong mid-20th-century influence. There are a number of notable and standout looks throughout the first season, which challenge other superheroes with impressive sartorial powers.

On the same October day in 1989, 43 infants were born to women who did not appear to be pregnant until moments before they went into labor. Of these 43, seven were adopted by monocle wearing billionaire Sir Reginald Hargreeves (Colm Feore) and they formed the initial (and only) intake at the Umbrella Academy. Here, six of the seven children were trained to harness their unique powers, which turned them into mask-wearing teen superheroes.

In flashbacks, the six kids bestowing powers became superstars with their own comic book series, action figures, and hoards of screaming fans. Cut to the present, fame for most has diminished, one of them is dead, another missing, however, the death of their father reunites the remaining estranged siblings. 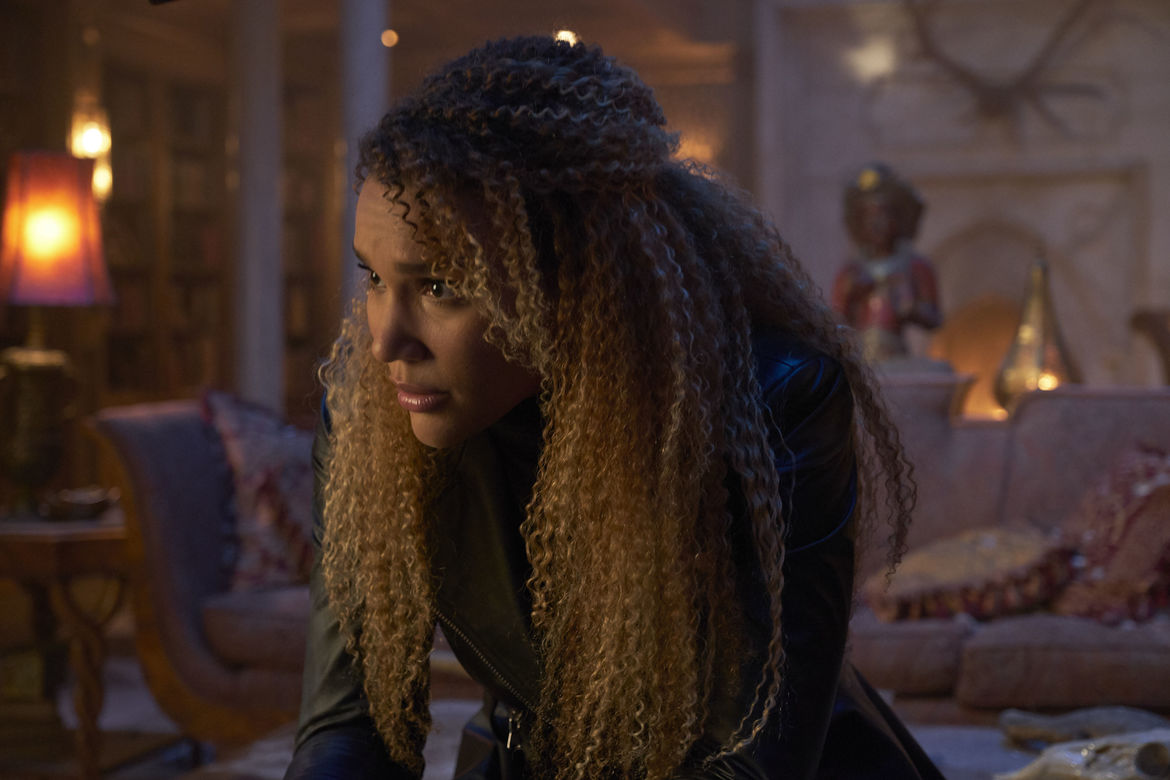 “Allison, will you wear Valentino to the funeral?”

It is quickly established that each of the now grown-up Hargreeves children has long since ditched the Umbrella Academy uniform — with the exception of one, more on him later. Allison (Emmy Raver-Lampman) is a movie star; a career that was helped by her ability to speak things into existence. Her introduction is on the red carpet, but even Allison's off-duty look is glamorous and brimming with designer garments.

Most of the siblings wear a muted palette, but Allison's closet is packed with color including a wide range of blue items, orange high-waisted Theory pants, and the very on-trend hot pink Helmut Lang cropped sweater (fun fact: this was also worn by Kristen Bell on The Good Place). 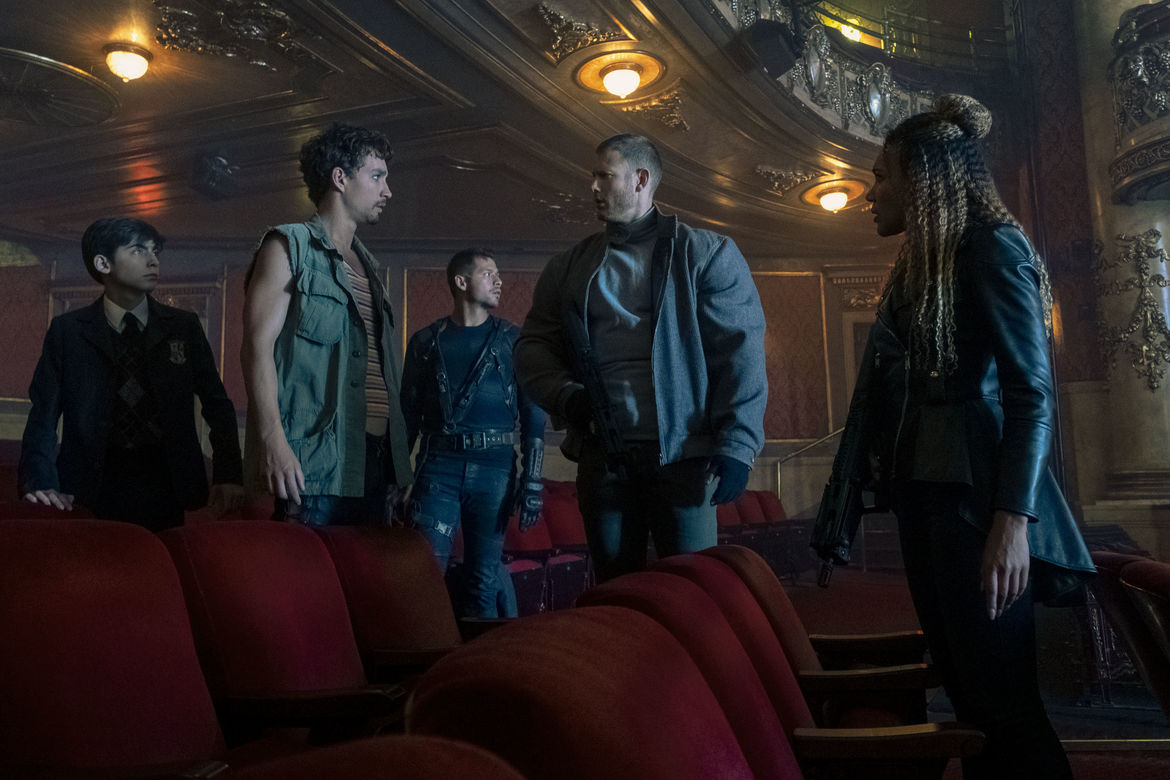 As adults, they no longer dress identically. Nevertheless, there are some crossovers between characters, including those who use clothing to hide and those who want to be seen. Signature outfit choices also exist, which in turn could be viewed as an extension of the uniform they wore when they were kids. Instead of blazers, Allison has more leather jackets than a biker convention, in a range of colors and styles. These include a teal draped number by Guess and a more traditional moto version by All Saints.

But the true standout is the peplum biker jacket Allison wears during two big fight sequences. Who needs a cape when you have Alexander McQueen?! It is both super feminine and fierce as hell; the perfect combination for a superhero-turned-movie star. 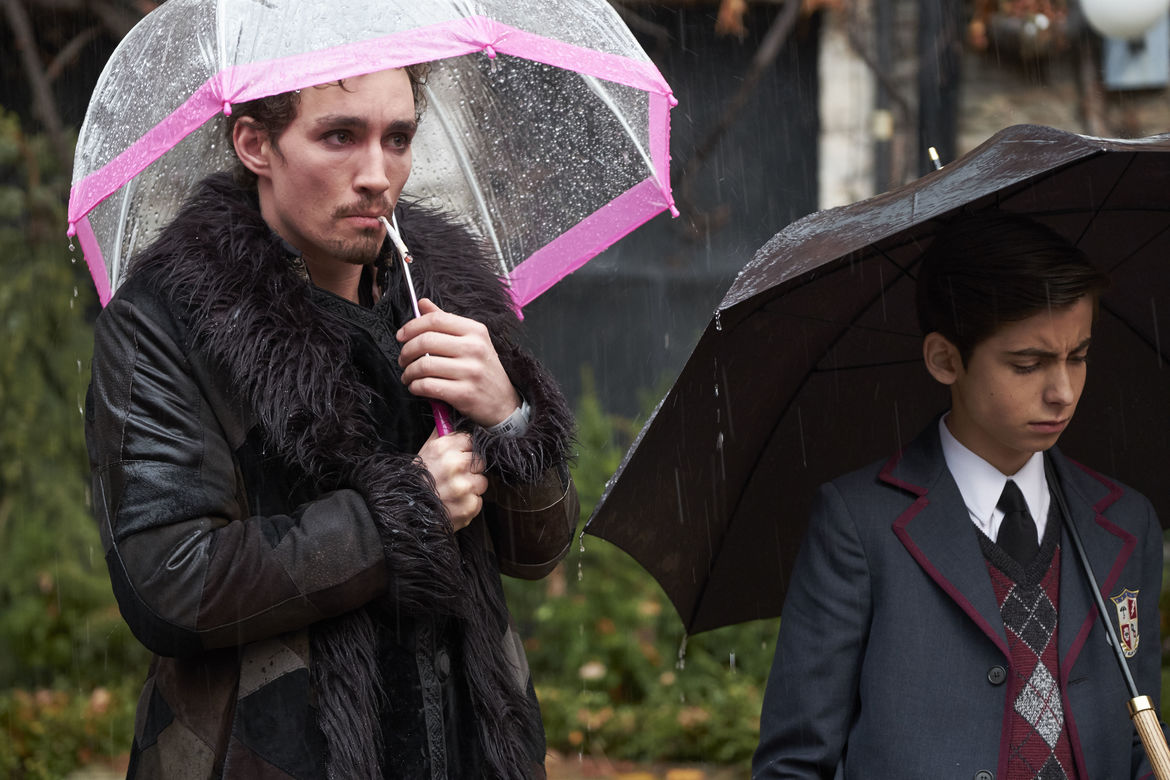 The other fashion maven of the siblings is Klaus (Robert Sheehan), though he is more vintage thrift than high-end designer. His style is gender fluid — Hargadon told Fashionista about 60 percent of Klaus’ costumes are women’s clothing — which means Allison’s closet is fair game. An airy leather skirt catches his eye in the first episode and he more than makes it work.

Klaus is a drug addict who mixes ‘70s Marc Bolan with ‘90s heroin chic; lots of eyeliner, a penchant for fur-trimmed coats, lace-up leather pants, and bold graphic tees. Tie-dye is making a comeback this year — from Prada to Stella McCartney — and Klaus is ahead of the curve. As with a number of Umbrella Academy characters, he is sartorially thrown out of time, which is given another layer of intrigue when his story takes a sharp turn halfway through the season. 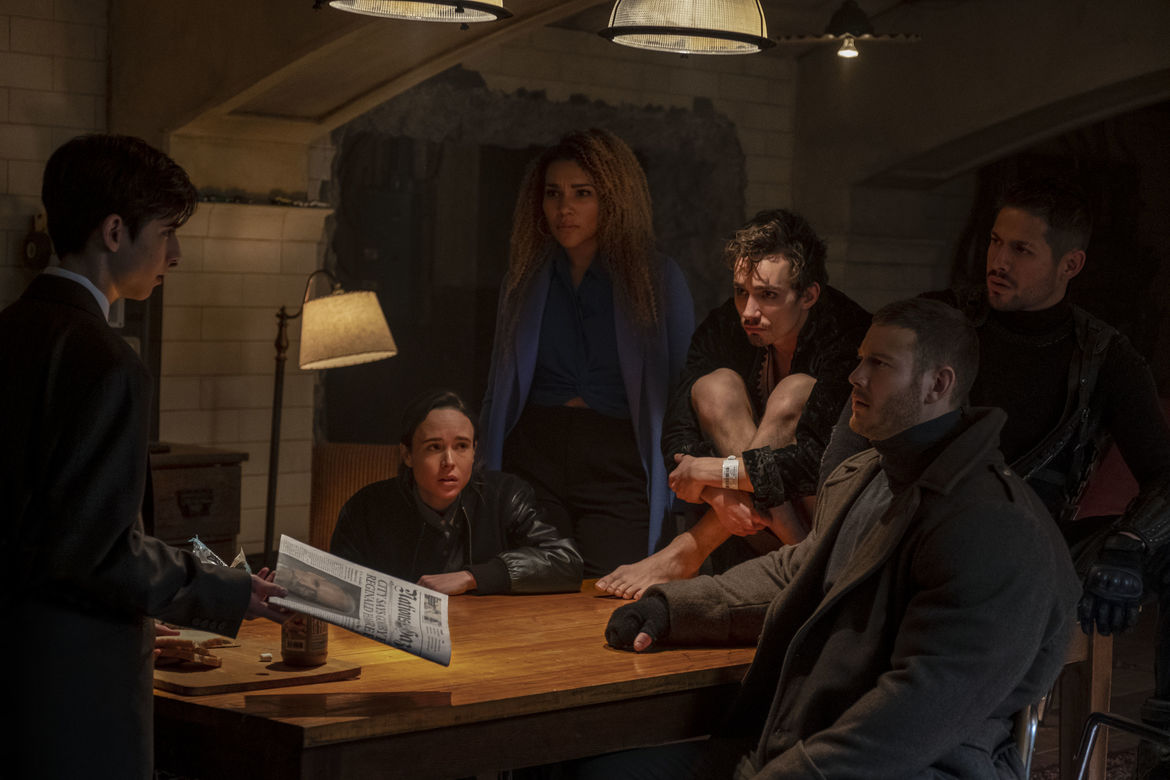 The rest of the siblings don’t have nearly as many costume changes, Diego (David Casteñeda) is always combat ready, dressed all in black, complete with his knife holster harness. He hides in the shadows and a black knit turtleneck really sells the look. Meanwhile, Luther (Tom Hopper) isn’t going to have much luck when it comes to blending in thanks to his size. But the button-downs shirts, military-style coat, and hoodies he wears are as nondescript as he can get. 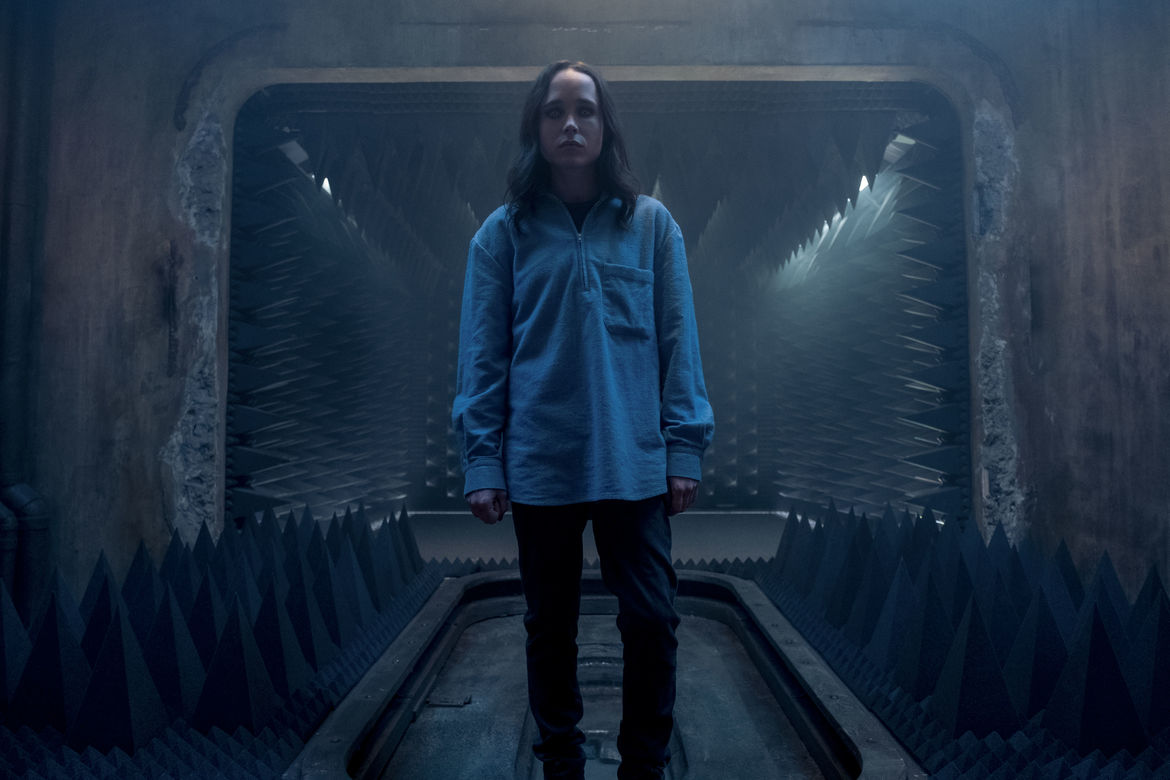 Leaning fully into a muted wardrobe is Vanya (Ellen Page); as the only sibling who wasn’t part of the teen superhero troupe, she is used to fading into the background. Vanya is going full normcore in oversized shirts and sweaters, but as with Klaus and Allison, she also has a thing for leather. But unlike her siblings, her jacket is far from flamboyant as it is oversized and zips up. 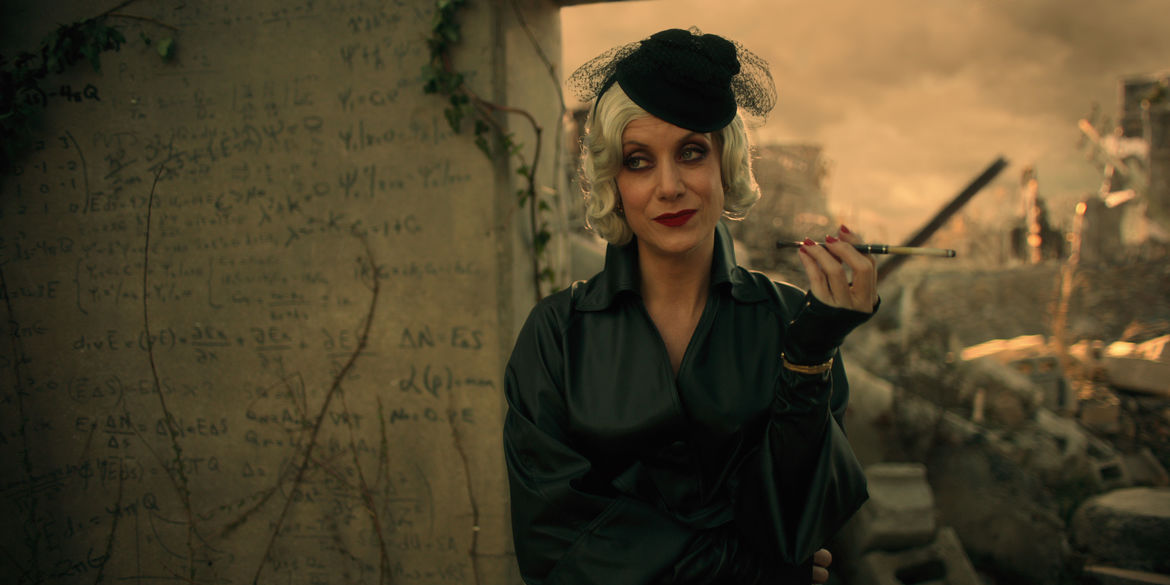 Five (Aidan Gallagher) is the only one without another name, he is also still wearing his preppy school uniform thanks to some time travel side effects, which has led him back to his 13-year-old body. People keep commenting on his adorable shorts and they aren’t wrong. 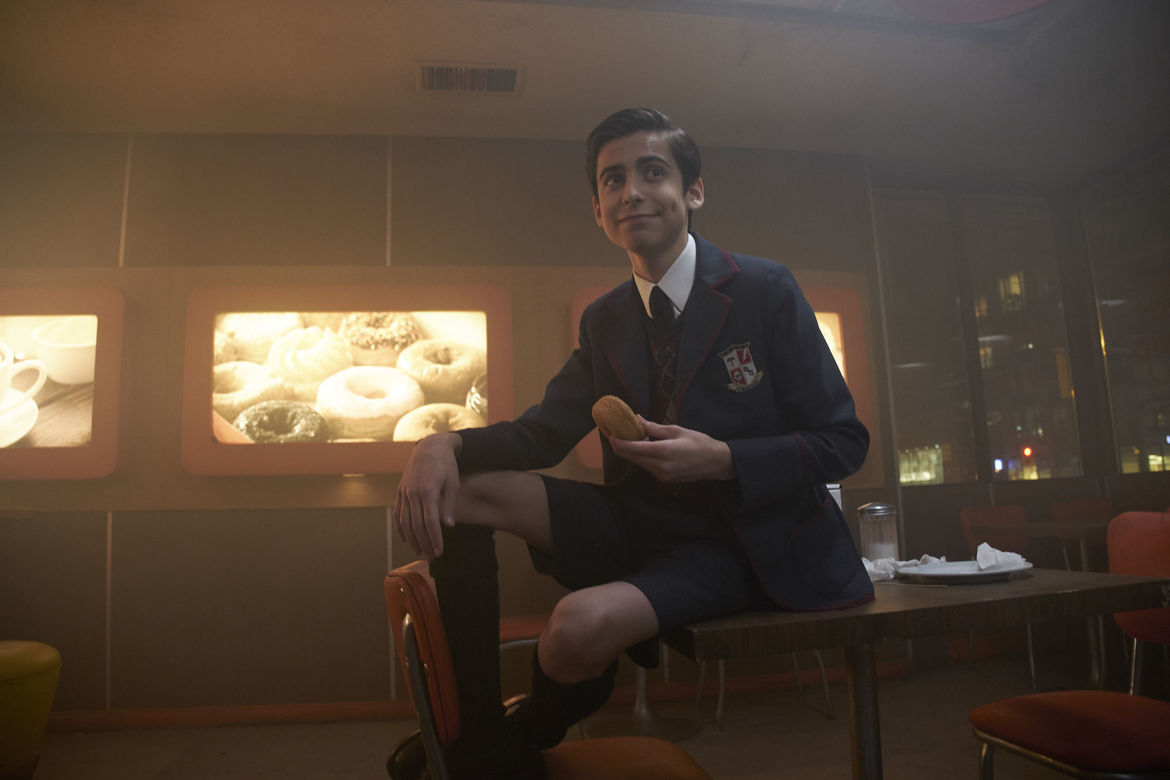 Five has a number of interactions with the mysterious Handler (Kate Walsh), who is decked out in the most fabulous of ‘50s get-up, including a dramatic black coat, red stilettos, a cigarette holder and a veiled pillbox hat. Allison is the movie star, but she is not serving up these particular levels of glam. The Handler looks like her fourth husband just died and she is throwing a party to celebrate. 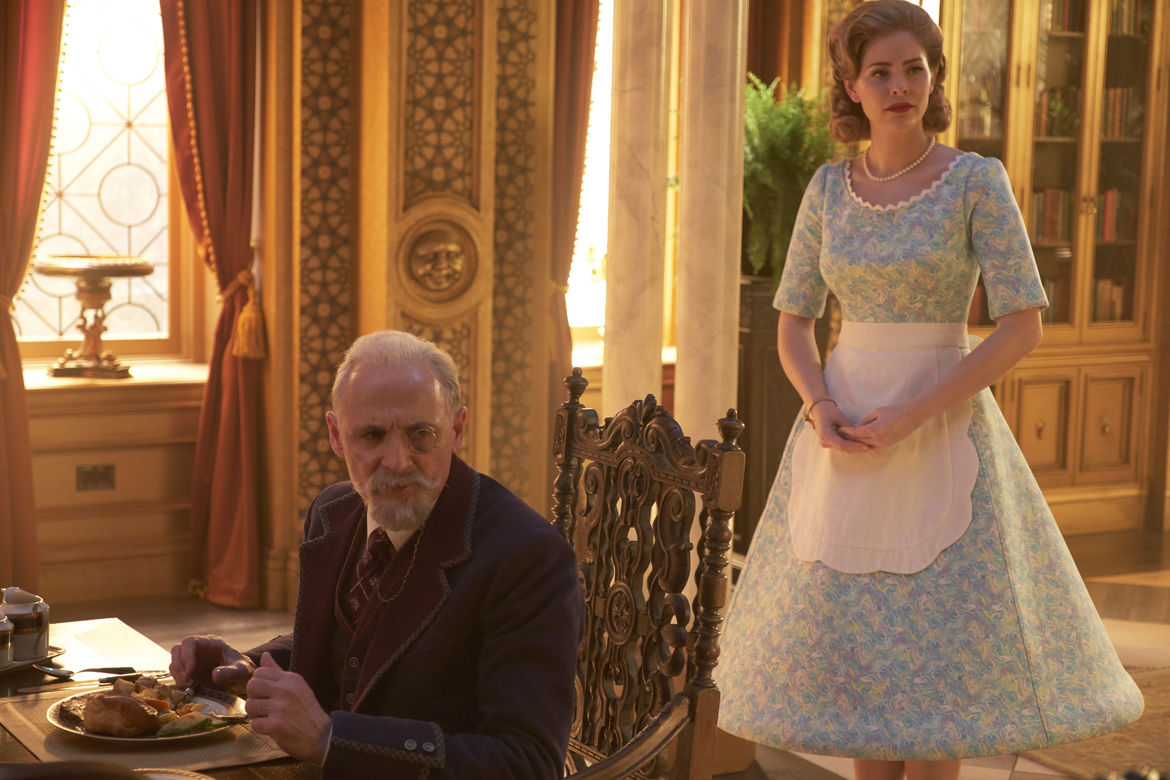 Also on the 1950s theme, but more Leave it to Beaver is mom-figure Grace (Jordan Claire Robbins). Grace could have stepped out of a ‘50s housewife commercial, which again adds to the heightened stylistic tone. She is one of the characters giving Umbrella Academy a kitsch edge amidst some of the more steampunk and rock infused garments. 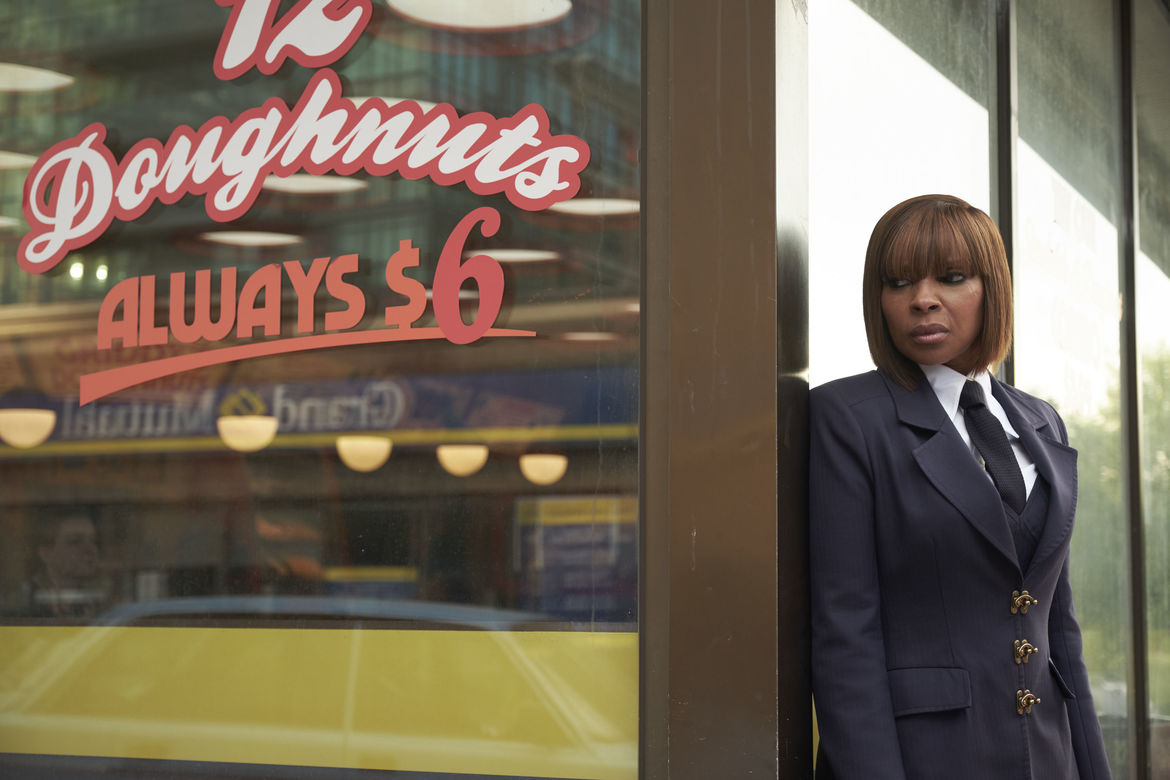 Costume designer Christopher Hargadon knows good tailoring as his previous body of work can strongly attest — including Hannibal and the recent X-Files revival. Scully’s (Gillian Andreson) impeccable work attire and Alana Bloom’s (Caroline Dhavernas) spin on the Hannibal (Mads Mikkelsen) suit in Season 3 are all because of Hargadon, so it is no surprise that Mary J. Blige as hitwoman Cha-Cha has one of my favorite overall looks on Umbrella Academy. Alongside partner Hazel (Cameron Britton), she wears a creepy kids mask paired with a three-piece suit to die for. It is an assassin ensemble with a gold-buttoned clasp twist and no amount of gunfights are going to ruin this silhouette.

The Umbrella Academy isn’t quite the steampunk-meets-twee levels of A Series of Unfortunate Events, but it does share a similar whimsicality in both the costume and production design. In part, this helps balance out some of the darker aspects of the narrative. They wore masks as children, but they can't hide behind those now. Some use their clothing to lurk in the shadows, others choose to stand out. They will be stronger as a unit, but it is going to take much more than a matching uniform to bring this team back together.