For every one of the eponymous lead character’s dating disasters and work blunders, there’s a hip-hop inspired top or bohemian-bourgeois blazer you’d love to own. Meanwhile, her glass ceiling-cracking BFF, Molly, steals scenes in a dizzying array of tailored power suits and Fendi heels.

Fans who’ve found themselves Googling Issa’s “A Different World” tribute tee, deconstructed De La Soul top or Harriet Tubman sweatshirt have costume designer Ayanna James to thank for their new closet obsessions. She dictates what this crew of 30-something Angelenos wear as they messily maneuver their personal and professional lives. James thinks relatability is the key to the show’s styling success.

“I feel like every character on the show is relatable,” she says. “You either know someone like that or you’ve been that person at a period in your life.” 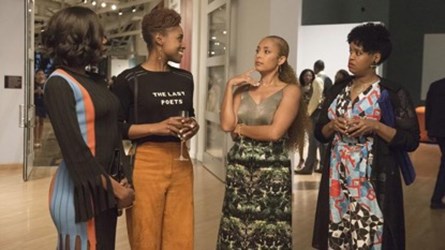 Formerly a biochemistry student, the Jamaican-born aesthete tested her styling wings by fashion blogging, assisting on local shoots and pulling looks for entertainers including Usher and Jidenna. Since 2015, she’s headed “Insecure’s” fashion team and draped Rae in red carpet looks by brands and designers such as Balmain and Christian Siriano. Samples of costumes from the show are now on display through Oct. 7 in FIDM Museum’s annual Outstanding Art of Television Costume Design exhibit. 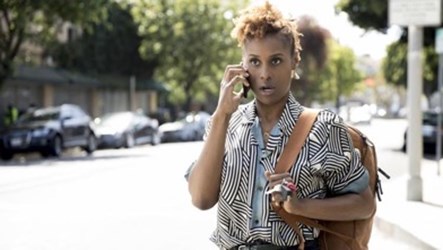 Sitting in her live-work space in Inglewood — the neighborhood where much of the show is filmed — James compares characters like pretentious Tiffany and perfectionist Molly to young women she’d met while attending Florida A&M University or here in L.A., which she has called home for the past seven years.

She’s filed away mental images of, say, Howard University coeds, with their “heightened levels of dresstivity,” or dressed-to-kill revelers at a Kiss-n-Grind dance party. She then channels all that material into outfitting the show’s predominantly African American cast.

“A lot of the elements that I use that are pop culture-related, they’re easily noticeable within black culture,” she says, offering Issa’s memorable Prince, Michael Jackson and Public Enemy T-shirts as examples. “If it’s something that’s influenced or inspired us, I’m going to use it. It’s a way to invite the viewer into this world.” 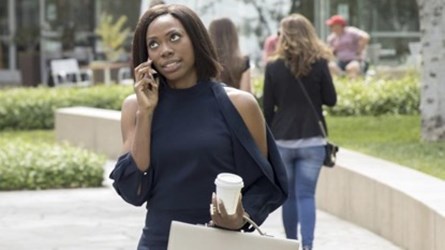 Always on the hunt for authenticity, James and her team shop where she feels the characters would shop. Setting aside the occasional sighting of a Givenchy dress, Maje jumpsuit or Bella Frued sweater, Issa’s fly sensibilities are largely hampered by her frugal means. James figures she’d frequent the Baldwin Hills Crenshaw Plaza and pick up handmade jewelry from street vendors near her nonprofit mentoring job in Leimert Park.

“Molly’s fly,” James says of the impeccably dressed attorney played by Yvonne Orji. “If she wasn’t a lawyer, she would probably be an editor at a fashion magazine. She loves labels and high-end designers, but she would shop online a lot. She doesn’t like going to the mall, right? That’s too much.”

While it’s not uncommon to see cast members in pieces from Urban Outfitters, the Slauson Super Mall and even Amoeba Music, James has a passion for representing lesser-known independent labels. For the Season 2 premiere and finale, she wanted to push the envelope with a sweatshirt from emerging New York-based label Omondi. The piece was bold and controversial, with its embroidered display of the N-word. 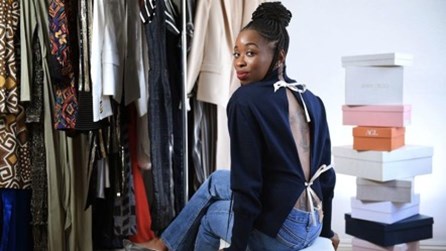 “I know that costumes on television are prime real estate,” James says. “I can use that platform to educate … to promote … to influence how the viewer feels.” James has encouraged her costume department to put out feelers on the ground. “I’m saying, ‘Go to your contacts, go to your homies who make T-shirts. Show me what they’re doing and we’ll see if we can plug it into the show.’ So, it feels very grassroots. It feels very ‘lift as you climb.’”

Season 2 of “Insecure” ends Sunday, and HBO has renewed the show for a third season. So viewers will be seeing more of Issa’s vintage Levi’s and beloved Converse, as well as the next stable of up-and-coming designers James is eager to share.

“I want to continue to break indie brands and bring exposure to black and brown designers,” she says. “Let’s make this a communal thing.”