When bringing a “whole story [that] is completely true, except for all the parts that are totally made up” to life, “Inventing Anna” costume designers Lyn Paolo and Laura Frecon had to dive into Instagram.

“The very beginning of the project was actually more about research and matching everything that the real Anna wore for her Instagram — which sort of became our Greek chorus,” Paolo told Variety. “And that was extensive research… Even before we got into the fashion elements, we had to recreate that whole Instagram wall, and also all of the court looks.”

“Inventing Anna” follows faux-heiress Anna Delvey (née Anna Sorokin) (Julia Garner) as she awaits trial for grand larceny and theft of services. Shonda Rimes’ nine-episode series, which premiered Feb. 11 on Netflix, is inspired by the 2018 New York Magazine investigation by Jessica Pressler, who dove into the life of Sorkin and examined how she scammed her way to the top of New York society and business while pretending to have a fortune of $60 million.

Paolo and Frecon’s job was to bring the looks of Sorokin and several of her acquaintances (including Alexis Floyd as Neffatari “Neff” Davis and Katie Lowes as Rachel DeLoache Williams) to the screen — while also creating new characters who were reimagined into the show’s world, such as Vivian Kent (Anna Chlumsky) who replaces Pressler.

“We would also research whoever [Anna] was in a photo with… We’d find out their timeline, go down rabbit hole after rabbit hole of what they were wearing at that time. Most of it was from past seasons, obviously, because it was a few years ago,” said Frecon. “After we figured it out… We then had to find it — and we would source places like Poshmark, Farfetch, anywhere we could go to find the exact outfit. And if we couldn’t find it, then we recreated it ourselves.”

Frecon added that the costume design department also examined images of what Sorkin wore in her court proceedings. “We tried to make it 100% like what you saw in the court pictures.”

Paolo noted that there were “so many different Annas on this show” — including the character’s interactions in the business world, luxurious parties and more. As a result, the character of Anna wore a long list of high-end brands — including Dolce & Gabbana, Valentino, Gucci and Prada. “We got to the point where we felt like we owned everything in town.”

Outside of Anna’s wardrobe, the costume designers had a lot of ground to cover for the other characters in the show — from Vivian’s mixed colors and textures as a busy reporter and soon-to-be-mom, to countless restaurant and hotel uniforms worn by Neff and more.

But of course, it’s the infamous Anna, an avid fashionista, who stands out. Here are five of Paolo and Frecon’s favorite Anna looks from the season.

2) Leopard Dolce & Gabbana Outfit (S1 E5 “Check Out Time”): Episode 5 shows Neff’s memory of Anna entering 12 George for the first time — as she gave out $100 tips and wore a chic, leopard Dolce & Gabbana dress and coat ensemble, Tiffany & Co. bracelet and ring and Gianvito Rossi shoes. “Money just walked through the door,” says Neff. Frecon noted that the look “shows this sleek, sophisticated, yet there’s something behind those sunglasses kind of character.” 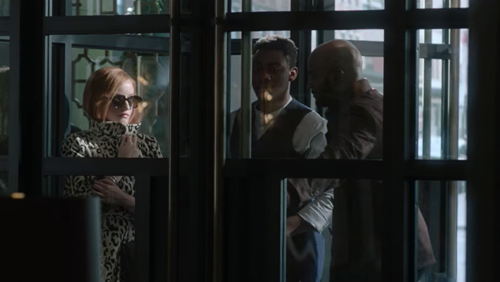 3) La Mamounia Hotel Robe (S1 E6 “Friends in Low Places”): When on a trip to Morocco (where Anna runs up $62,000 in bills and allegedly charges it all to Rachel’s credit cards), Anna gets a call from Fortress saying that they have approved her loan for the Anna Delvey Foundation. But after finding out that someone would be sent to Germany to verify her assets, Anna’s confident excitement ends. She grabs a bottle of champagne and goes to play tennis in her hotel bathrobe (courtesy of La Mamounia Hotel). “I just love that sequence. And it’s not a fashion moment, but [for] how a character devolved, I thought that robe worked for that scene,” said Paolo. 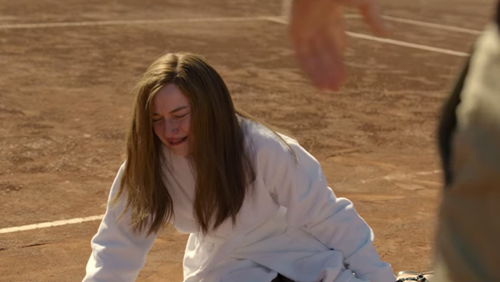 4) Red Valentino Coat and Theory Dress (S1 E7 “Cash on Delivery”): As the Scriberia team works to help Vivian finish the story, Episode 7 weaves in even more flashbacks — including the first meeting between Anna and her lawyer Todd Spodek (Arian Moayed). She wears a red Valentino coat and a black Theory dress. “This isn’t one of her most glamorous ones, but I love, in Episode 7, the outfit that she wears through pretty much most of the show — because it shows her fall from grace,” said Frecon. “She has to wear that outfit for the whole episode throughout the night in the subway; then she goes and cleans herself up in a Starbucks and puts herself back together, and goes and steals a whole bunch of money.” 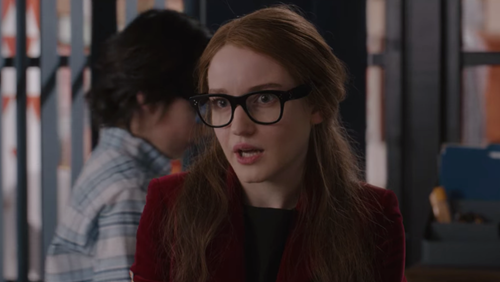 5) Gold Dolce & Gabbana Dress (S1 E8 “Too Rich for Her Blood): In Episode 8, viewers are taken to a flashback glimpse at Anna’s apparent suicide attempt (which Vivian later uncovers to not be real) at the Chateau Marmont in Los Angeles. In the scene, Anna is wearing a gold, one-shoulder Dolce & Gabbana dress, a YSL purse and a pair of Coach shoes. “When she’s pretend killing herself, we felt it should be like a very Hollywood feeling at that moment, very 1930s… It was a juxtaposition of her world falling apart but she had to look fabulous to be found by the staff,” said Paolo. 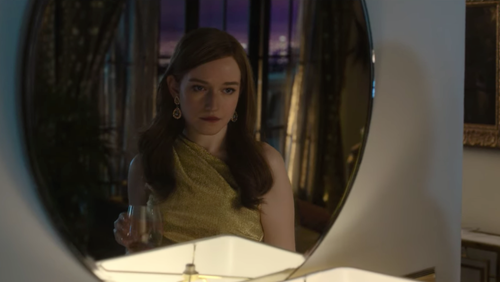