Few things can drain the absurdist exhilaration out of sketch comedy faster than over-analysis. And yet it still feels worthwhile, if only as a thought exercise, to try to track the unceasing torrent of comic turns that play out over the course of a five-minute stretch of the first episode of Netflix’s new, rapid-fire, pleasantly exhausting Aunty Donna’s Big Ol’ House Of Fun—if only to get a sense of how aggressive and fearless, bordering on hyperactive, its approach to its own premises can be.

To start: Mark Bonanno, one of the three members of the Australia-based sketch troupe to star in the series, approaches co-star Zach Ruane to compliment him on re-naming their house’s wi-fi network “poopoo.” The show’s third star, Broden Kelly, then enters, and is also delighted by the new name. Members of the local community emerge to express their own appreciation for the hilarious name. This culminates in an appearance by “Jerry Seinfeld” (Karan Soni), who’s there to give the trio prizes for being so funny. This is followed by two quick cutaways, one of which shows off said prizes, while the other documents an awkward moment in which the Aunty Donna guys are shot down by Seinfeld for an appearance on Comedians In Cars Getting Coffee. 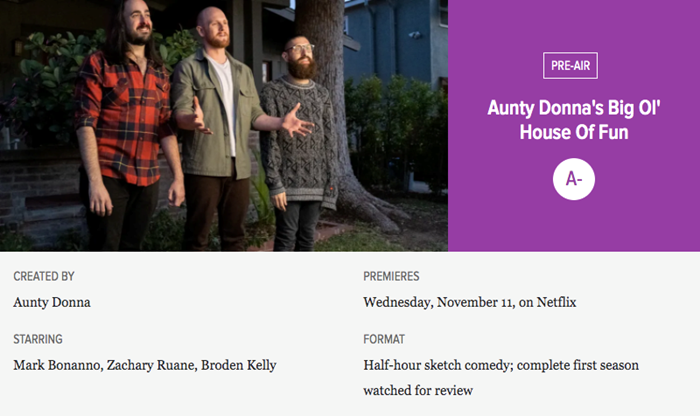 While leaving, Seinfeld reveals his own, better wi-fi network name. This causes Mark to turn on Zach, calling him a hack. Angered by Mark’s bullying, each member of the trio (including Mark) runs away to their room, where they pull a poster of him off their walls while sobbing. Cut to a poster store, where they then request three new posters, only to be told that this is impossible because it’s “poster season.” Upset by the request, the poster store employee runs to her back room, where she tears down her own poster of the trio, and begins to cry. Zach begins to fantasize a thought bubble of himself telling him it’ll all be okay, but all three begin screaming when they see the thought bubble protruding from his head. Broden grabs a pair of gardening shears and begins cutting away at the thought bubble. Bloody chaos ensues. Again: This all occupies roughly five minutes of screen time.

Which is a very long, very nerdy way of saying that pretty much everything that makes Aunty Donna’s such an unrelenting delight is right there from the jump: a mixture of playful silliness, sudden violence, and self-skewering meta-comedy that infects the entire production. Not at all surprising, then, to learn that Scott Aukerman co-produced the show, which carries plenty of the same “Pee-wee’s Playhouse but for adults” vibe that also powered the Comedy Bang! Bang! TV show. Bonanno, Kelly, and Ruane vacillate wildly between childish glee, abrupt rage, and sudden breaks into song, all loosely guided by a theme (“Housemates,” “Night-time,” “The Queen of England is coming over for a dinner party”) that get announced at the top of the episode. The result is an exercise in constant heightening that occasionally leaves the viewer feeling run a bit ragged, but never bored.

In fact, if you’re looking for a touchstone for the show’s constantly ramping sense of “yes, and,” you could do a lot worse than Michael Showalter, David Wain, and Michael Ian Black’s Stella, another show about a trio of emotionally volatile man-children with an often shocking ability to adjust to absurd new realities. Where Aunty Donna’s distinguishes itself, though, is in its sheer run-full-tilt-at-the-wall sense of energy, which infuses even jokes predicated on long pauses and awkward silences with an off-kilter, potentially explosive feel. But where a show like Tim Robinson’s I Think You Should Leave takes that kind of intense awkwardness and uses it to burrows deep into its audience’s brains, Aunty Donna’s instead uses it as a springboard, a long-held breath before launching itself even deeper into the madness. And underneath it all is the sense of a bunch of kids at unrelenting play, both in front of and behind the camera, even when—maybe especially when—sudden bouts of bloody mayhem or elaborate sex-gags break out.

There are going to be those for whom the sheer volume of the whole thing will probably be too much (or, at the very least, too much to binge without picking up a headache). But Bonanno, Kelly, and Ruane are all deft hands at making the boys—it’s impossible not to think of them as “boys,” for good or ill—likable. Meanwhile, a whole host of top-notch comedy guest stars—Aukerman, Mary Sohn, Weird Al Yankovic, wrestler Awesome Kong, Paul F. Tompkins, executive producer Egg (née Ed) Helms, and absolute scene stealer Tawny Newsome—are all on hand to keep the whole thing from feeling entirely like a mid-quarantine hallucination writ large.

It’s that sense of escalation, though, that makes Aunty Donna’s Big Ol’ House Of Fun so, well, fun—that moment, deep into a sketch, where you ask yourself how the hell we got to tap-dancing S.W.A.T. troopers or dick-nippled barbers, and then realize that, against all odds, it does in fact make a sort of insane sense. After a year mostly spent locked inside our own homes and heads, it’s nice to get dragged along through someone else’s high-impact hallucinations for a change.