Headlines
Previous
How THE BABY-SITTERS CLUB, Costume Design by Cynthia Summers, Reinvented Its Style For a New Generation
Next

Exclusive: Costume designer Cynthia Summers breaks down each BSC member's style and reveals the inspiration behind each character's look

Since its premiere on July 3, Netflix's adaptation of The Baby-Sitters Club has charmed viewers in the same way Ann M. Martin's beloved book series won over legions of fans years ago.

But the streaming giant's take on the BSC isn't your millennial's version of the close-knit group of friends as Kristy, Mary Anne, Claudia, Stacey and Dawn have officially been given the Gen-Z makeover while still honoring the iconic characters from the novels. And not just when it comes to their personalities.

Costume designer Cynthia Summers paid homage to the style exhibited by each girl on the covers of the books while still making sure the club looked didn't look outdated to younger viewers who are also streaming shows like Outer Banks and Riverdale.

This Club will watch your kids and look pretty cool while doing so, thank you very much. And the actresses playing the adored characters had just as much fun seeing the Club brought to life on-screen through their clothes.

"I feel like they portrayed all of our characters exactly how I had envisioned them," Malia Baker (Mary Anne) told E!. "Seeing each other in our wardrobe for the first time, it was so much fun."

Summers and her team made sure to get input from all of the series' stars about their character's looks, with Shay Rudolph, who steps into Stacey McGill's expensive kitten heels, explaining, "Whenever we were doing our costume fittings, she was always asking what I was most comfortable in and what I would want to wear, so that was really awesome to be able to feel like I actually was Stacey and choose my own outfits."

E! News was able to snag the meeting minutes from Summers on how she updated each member of the BSC's wardrobe for a new generation of viewers while still honoring the book series and asked for some behind-the-scenes facts about the clothes from series stars, including their adorably hilarious nickname for Mary Anne's loafers... 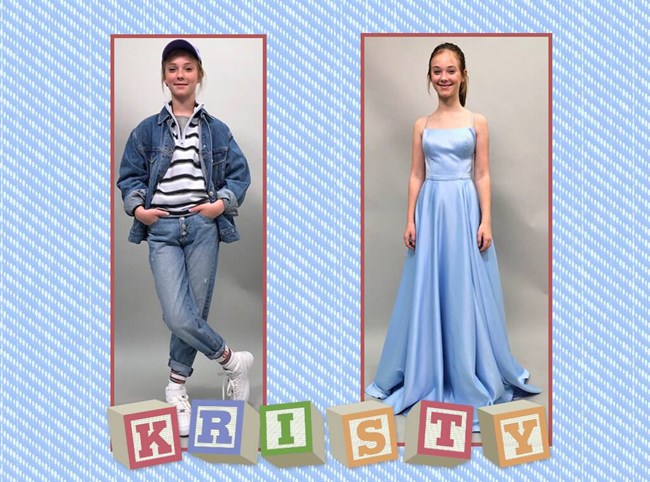 To find the bossy and assured president's look, Summers "definitely referenced very close to the books."

"I don't wear sweatsuits like Kristy does, but that was extremely comfortable," Grace said of her character's casual clothes.

When it came to Kristy's biggest (and only) fashionista moment, serving as the maid of honor at her mom's wedding, Summers said it was "simple" picking out her light blue gown "as Kristy does not wear dresses, figure-flattering, but with a feminine edge." 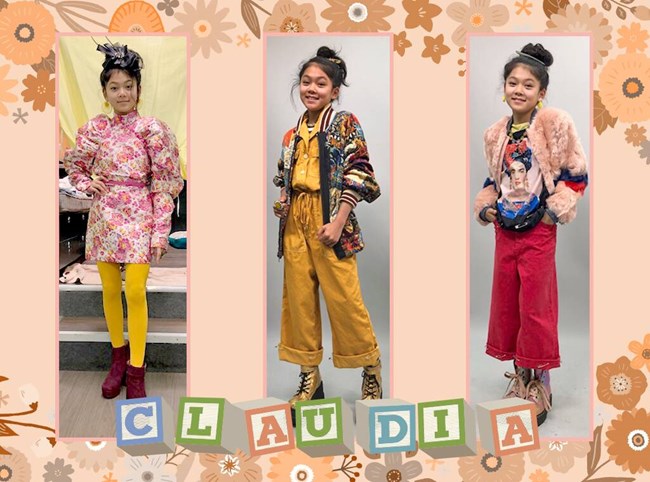 Confession: we want every single thing Claudia wore during this season, with Summers and her team totally nailing the club's most eclectic member's signature style.

"Art house inspired all the way!" the costume designer explained of her reference point when creating the artsy VP's look. "Claudia's style is whatever inspires her in the moment. If she can't purchase or repurpose it, she creates it!"

Art house meant her wardrobe  needed to look bright, bold and effortless. It needed to look like she repurposed, and to some degree created her looks, from scratch." 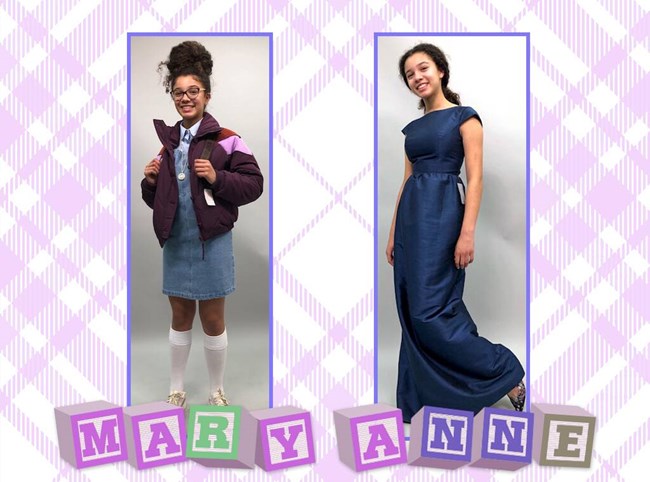 When it came the club's shy secretary, Summers wanted to be true to "how she was written in the books, including her 'style makeover' mid-season of the show."

Because was she "stuck in pre-pubescent nightmare when it comes to fashion, because of her father," Mary Anne favored cardigans, skirts and loafers in the first half of her season, with the costuming having a surprising impact on Baker.

"I have a new appreciation for clothes," she told E!. "I wasn't much of a fashionista before, I still admit I am not...but those loafers and the skirts and the cardigans, it was a whole new experience for me."

While on set, the girls had a special nickname for the loafers, with Grace revealing they were called "the Benjamin Franklin shoes." 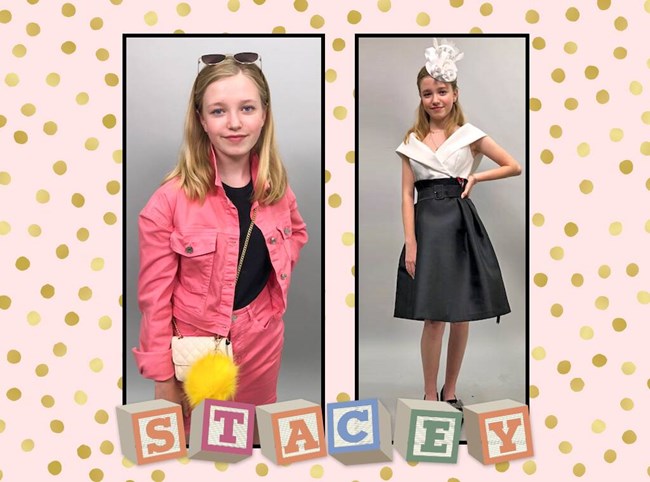 Plus, Summers wanted to find "layered" looks for the club's treasurer "as she had something to hide (her insulin pump) at the beginning."

For Stacey's chic wedding ensemble, Summers revealed she couldn't find a black and white dress she liked so she "purchased two dresses, one white one black, used the top of one and the skirt of the other." A "custom black and white fascinator" was just the cherry on top of the cake.

And Stacey's fashionista tendencies ended up rubbing off on her portrayer, with Rudolph telling us, "I feel like there were certain things that Stacey wore that I was like, 'Oh my god, I totally want to wear this.' But at the same time, when we started filming, my fashion sense was not as advanced as it is now.' Being able to play Stacey and wear all of these amazing outfits definitely changed the way I wanted to dress overall.

Rudolph was such a fan of her character's wardrobe that she was even rocking one of Stacey's shirts during an interview with E! News. "[It was] really awesome to take a little piece of the Baby-Sitters Club home," she told us. 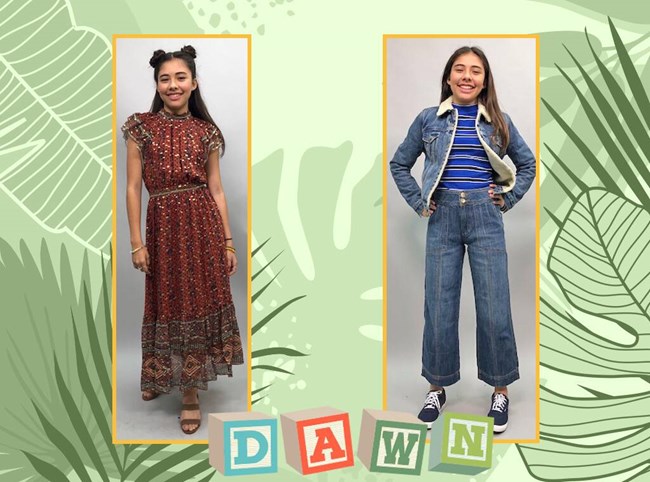 As a transplant from Los Angeles, the new Stoneybrooker was bringing major "needed to standout as a newcomer, so leaning into her Cali style certainly helped with that."

But rather than go completely for the socal surfer aesthetic, which Dawn is known for in the books, Summers decided to add in a lot more skater girl to the newest BSC member's closet. 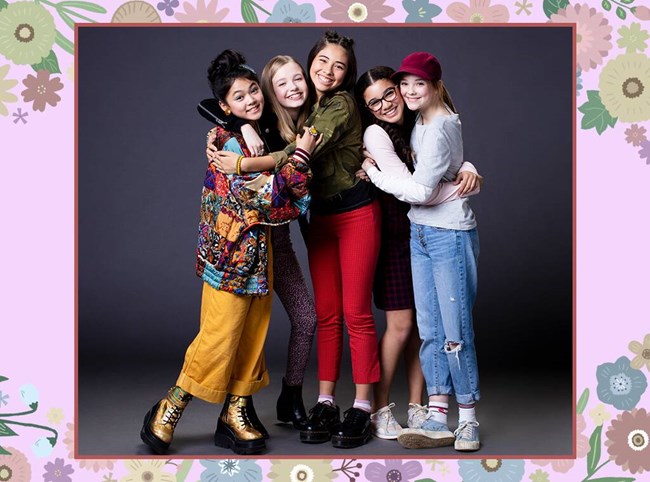 Wanting to add some BSC vibes to your own closet? Summers revealed where she scored most of the clothes worn by the girls and it's refreshingly affordable and attainable.

"Most of the characters were purchases from places these girls would shop in real life….Zara, H&M, American Eagle, Gap, Urban Outfitters, Aritzia, Top Shop, Kate Spade, Alice & Olivia, Anthropology, Nordstrom," Summers revealed, "and because we shoot in Canada, 80% of everyone's fashion was purchased at Simons in Vancouver."

In fact, "almost all of Claudia's was purchased" at Simons, with "lots and lots of vintage shopping and up-cycling" added to find her signature look.

And after filming ended, the five main stars were allowed to take home pieces from any of the BSC members wardrobes, with Grace, who had spent the season in Kristy's tomboyish wardrobe, admitting to us, "I totally jumped onto Claudia's wadrobe!"

The Baby-Sitters Club is now streaming on Netflix.