An adaptation of the Man Booker-prize winning novel, the epic drama The Luminaries tells the 19th-century tale of love, murder and revenge, as men and women travel across the world to make their fortunes on the wild West Coast of New Zealand’s South Island. Set in the height of New Zealand’s 1860s gold rush, two young adventurers, Anna Wetherell (Eve Hewson) and Emery Staines (Himesh Patel), meet on the last day of their voyage to New Zealand. The Production Design and visual narrative for the screen adaptation of Eleanor Catton’s mysterious masterpiece evolved from the same precise, astrological principles as the novel and begins with the idea of a ‘living zodiac.’ Just as each character is associated with a particular sign of the zodiac, the Sun and the Moon, so too, is the world they inhabit.

During the initial research and development phase, set decorator Daniel Birt and I gathered over eight thousand images as the basis for each set and character environment. Our research took us on a journey from the goldfields of California, Africa, Alaska, British Columbia to Victoria, Australia and back to Aotearoa, New Zealand. Each place held significance for us in terms of the design, as 1860s Hokitika was filled with prospectors from cultures around the globe. We took inspiration from contemporary photography, art and nature to create a unique tone, style and palette that could be described as ‘New Zealand Gothic’ in the tradition of Vincent Ward’s Vigil and Jane Campion’s The Piano.

A. DUNEDIN STREETS, BUILT OVER CHRISTMAS, AND COMPLETED WITHIN 3 WEEKS IN THE CAR PARK NEXT TO THE PRODUCTION OFFICE. SET PHOTO.

B. THE HOUSE OF MANY WISHES. CONSTRUCTION ELEVATIONS.

This was a challenging project to realize given the period, scale and detail the story demanded. I was fortunate to have an extended research and development phase, as the wealth of knowledge gathered during this period informed every subsequent design decision. What distinguishes the Production Design in The Luminaries from a similar production filmed in the UK or US, is each of these environments was created from scratch rather than filmed in existing locations. In this sense, the ‘world’ relied heavily on the practical, technical and aesthetic craft of the design elements.

Creating period drama in New Zealand posed certain challenges due to the absence of prop and decoration houses similar to those in the UK and US. Each environment was carefully curated by scouring auction houses, antique dealers and collectors, both in New Zealand, Australia, the UK and US. Meticulously detailed environments became the living, breathing spaces for the characters’ performance to unfold. There was apalpable sense of magic as the sets were painstakingly painted and decorated and the world of The Luminaries began to come alive.

I sought to seamlessly blend historical naturalism with a sense of modernity in the design and decoration. It was important to underscore the sense of mystery and intrigue that unfolds, as journeys across land and sea bring about a similar tale of love, loss, adventure and turmoil, as the characters’ previous lives are left behind. In collaboration with director Claire McCarthy and cinematographer Denson Baker, we sought to create cohesive and transformative images for each character and environment.

A. THE HOUSE OF MANY WISHES. CONCEPT ILLUSTRATION BY FILIPPO VALSECCHI.

B. THE HOUSE OF MANY WISHES. INTERIOR STAGE SET. SALOON DETAILS. SET PHOTO.

C. THE HOUSE OF MANY WISHES. ATRIUM. SET PHOTO

I have often been asked about the importance of historical accuracy in approaching Production Design for a historical period. It is significant in terms of the architecture and period-specific details. An emotionally resonant connection with the past is important and this was achieved by accentuating the connection to the present.

However, we are creating cinema and not documentary and it is important to allow a departure from what may be ‘accurate’ for dramatic purposes. Authentic representation need not be accurate. The notion of ‘authenticity’ was foremost and was driven by the narrative. Although this story takes place in the 1860s, I was committed to a visual style that held true to the visceral and heightened tone of the show. It was important to present Hokitika in a way that was authentic to the West Coast and the New Zealand climate; at times treacherous, enshrouded in mist and often muddy. The production wanted to create a visceral atmosphere to portray the dust, decay, muck and ash, all part of the harsh quotidian existence of the time. These elements informed my approach to the design and were then interwoven into each of the intricately detailed sets.

A. THE HOUSE OF MANY WISHES. SALOON. SET PHOTO.

B. THE HOUSE OF MANY WISHES. SALOON. SET PHOTO.

The House of Many Wishes

The House of Many Wishes is a notable set and the character environment for Lydia Wells (Eva Green). Eclectic decoration features prominently in Lydia Wells’ rented hotel-turned-fortune parlor/gentlemen’s saloon. Here, the magical and mystical Lydia plays fate and spins the wheel of fortune. I suggested to the writer the notion of the hotel being burned in the past. This was a way of giving logic to the heightened scenic treatment the architecture demanded. Every detail of the interior set told the story of the history of the building and set the tone for the action; the charred interior kitchen and parlor, the sound of rain hammering on the tin rooves, the night sky, visible through the Victorian ‘roof-lantern,’ a decorative skylight made of clear and alabaster marble panels that gave the illusion one was at once looking at the night sky and the surface of the moon.

The elaborate interior echoed its exuberant exterior: quatrefoil filigree panels in the stair and saloon, decorative over-mantels and lintels, carved wainscot timber paneling, resplendent with native, New Zealand floral designs, anaglypta wallpaper and hand-painted stained-glass windows. I designed the interior set as an unfolding stage, with two saloons, both framed by proscenium arches and a sweeping, theatrical staircase, where Lydia holds court in front of the orrery, entertaining men and telling fortunes, as they soon part with their hard-earned coins. A painting of two huia birds on a branch features prominently above the fireplace in the main saloon. I chose the huia, as it was symbolic of many of the narrative themes in The Luminaries; a rare and precious bird that held special significance to Māori, it was driven to extinction by deforestation and overhunting to procure their exotic tail feathers for hat decorations. In an homage this now extinct native New Zealand bird is portrayed in all its living glory, suspended in time, at the moment the story takes place. 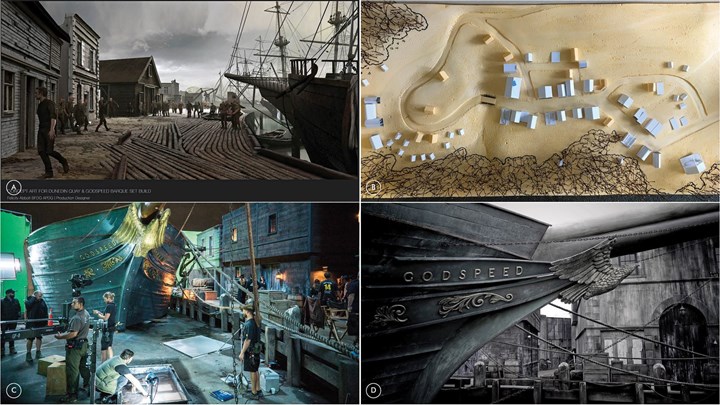 The scarcity of period-correct locations, carriages, boats and dressing available in New Zealand, required the majority of the settings be built, including part of the three-masted barque, the Godspeed. The exterior of the ship was built as part of the Dunedin quay set and included a customs yard, wharf and various buildings, led by Assistant Art Director Jenny Hitchcock. The interior cabins and cargo hold were built on a gimbal set in South Auckland. On the day I was scheduled to give a tour of the sets to UK studio executives, the letters on the side of the Godspeed had just been fixed to the recently built ship, as Scenic Artists rushed to ready the set for filming. As we walked up through the customs yard toward the docked half-ship, I noticed the ‘s’ had slipped off and fallen, leaving the rather unholy ‘God_peed’ in its place. This was a rare moment of levity, in an otherwise turbulent sea.

Dunedin represents the connection to Europe and is the port of arrival for the characters Anna Wetherell and Emery Staines. From Dunedin, prospectors make their way by land or sea to Hokitika and the West Coast of the South Island. The absence of period-correct streets meant this set was built from scratch. The Dunedin exterior streets were constructed in the car park outside the production office. The result was a wonderful collaboration between construction, greens, set decoration and scenic teams. This set went up quickly, in a matter of weeks. It was then partially re-configured and enlarged, to create the Dunedin quay set. The exterior of The House of Many Wishes was part of this exterior set build. During the research phase, I discovered a photograph of the former ‘Oriental’ hotel of Dunedin. This became the inspiration for the exterior set build. A four-story timber building in an ornamental ‘continental’ Gothic style, with oriel windows and Tudoresque-style chimneys, The House of Many Wishes exterior stands tall in the completed Dunedin streets set, an eccentric contrast to its architecturally conservative neighbors, with its elaborately ornamented façade.

The town of Hokitika is key to the setting of the story and is known to Māori as Te Waipounamu, or ‘the Greenstone Waters,’ a direct reference to the South Island being the source of treasured pounamu (greenstone). On the West Coast of the South Island of New Zealand, Hokitika was first settled in 1860 after the discovery of gold. It was a vital river port and many ships came to wreck on the notorious ‘Hokitika Bar.’ Ten key images from the National Library collections formed the basis of the design concept and set build for the township. It occurred to me during the research phase, we were creating a distinctive genre: a ‘wet’ Western. Many of the film’s cinematic and historical influences for similar gold rush towns were from markedly dry landscapes. With its spectacular Alps, picturesque fiords and subtropical forest, the New Zealand landscape is best seen in the misty rain, under a diffuse blanket of white cloud. A far cry from the dusty ‘Western’ resonances I discussed with the director, such as Once Upon a Time in the West and True Grit. The Hokitika sets were built over a four-month period on a private farm in West Auckland, led by Art Director Greg Allison. This allowed the Art Department to design the complex and contained the geography we created to provide maximum coverage for filming, while maintaining the landscape as a constant backdrop. Sightlines—the camera’s focal length and the relationship from one point to another were crucial in designing the Hokitika set. We made models and spent many hours on site, pegging out structures and checking lenses prior to the start of construction. We then focused our attention on the interior and exterior details garnered from the reference images and applied them to each set. The final result is a culmination of the research and visual reference and our specific palette, tone and style. The landscape was created entirely from the ground up and involved the work of landscapers, carpenters and scenic painters for months before the final dress could take place. A large crew supervised by key greensman Roger Allan cleared the land, laid roads, drainage and installed water tanks, just as one would in an actual town. They also installed hundreds of tree trunks as part of the dress, to indicate where the trees had been milled to provide timber to build this new town. The result was a large ‘living set’ chosen for its ability to provide 270-degree coverage during filming.

I remain proud of the world the series created, the result of which is unlike anything seen before on screen. It is a presentation of a uniquely Antipodean period in history. A ‘New Zealand gothic,’ rich and with layered ephemera, local flora, fauna, landscape and architecture. As a New Zealander of Māori and European descent, it was a great privilege to be part of the creative team that brought The Luminaries to life. ADG