Alienist fans have something to look forward to this weekend when the second season, The Alienist: Angel of Darkness, premieres on TNT. Like the first season (2018), this installment is based on the novels by Caleb Carr and takes viewers back to the Gilded Age in New York City, where Sara Howard (Dakota Fanning), Laszlo Kreizler (Daniel Brühl), and John Moore (Luke Evans) are investigating a new grisly case.

This season, like its predecessor, was shot in Budapest and was a large production with an international team working behind the scenes to recreate a very specific period in American history. While the crew had some holdovers from the previous season to work with, they also had to create some new sets and work with a new atmosphere, season two production designer Ruth Ammon tells Fortune. 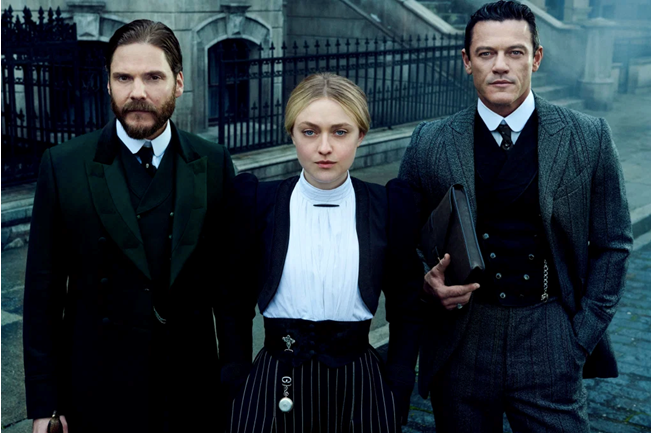 “The first season left us a fairly substantial backlot, and one of the great things about that was it had sat in the weather for almost a year of rain and snow and sun, so it built up a lot more character into the set,” Ammon says, adding that despite that, they had to weave some new locations into the mix.

Then there was the fact that while the first season of The Alienist was more of a nighttime story, and a lot of action in Angel of Darkness actually takes place in daylight, raising some questions about maintaining tonal similarities throughout the series in a new setting.

“How do we create scary moments, shadowy moments in the middle of Central Park, or in the middle of a street?” Ammon says. She wound up pitching historic areas like Gansevoort Market as the “underbelly” and using some “architectural elements to cut out the sunlight.”

Gansevoort Market, seen here in concept art, served as something an "underbelly" in the new season of "The Alienist."

Some of the new sets viewers will see include Sara Howard’s detective agency as well as Newspaper Row (Ammon’s favorite), the Lying-In Hospital, and Cyrus’s Oyster Bar. The fresh locations help with telling new stories this season, which Ammon tried to be mindful of, especially when establishing the detective agency.

“In the first year, [the characters] were in a temporary hiding spot, 808 Broadway, and it was kind of a rundown, sleepy area. In this new season, we see Sara has left her work at the police department, and she’s ventured out on her own to establish a new detective agency, which was unheard of at the time,” Ammon says.

To illustrate the character’s independence, the production team created a bustling business district. (Ammon points out that office buildings had started to rise by the mid-1800s.) They built out signage, window treatments, and also established “businesses slanted toward business,” such as those selling men’s business clothing, typewriters, office supplies, and barber services.

“So all these things were slanted to men in offices in buildings and Sara being the lone female in this picture,” Ammon says.

Fanning, Brühl, and Evans in “The Alienist: Angel of Darkness.” Fanning’s character, Sara Howard, strikes out on her own, establishing a private detective agency.

At one point in the new season, characters attend a lavish ball—the type of event typical of the Gilded Age, which often served as a way for women to one-up their friends, Ammon says.

“It was really like the beginning of the step and repeat,” she says of the balls from that era, referring to red carpet and similar publicity events held today. “The reporters would line up on the street, and there would be lines of carriages and people walking down the red carpet, and being photographed in these costumes, going into these balls. And they’re ridiculous costumes—clearly people had a lot of time.”

The ball seen in this season of The Alienist has a garden follies theme. “One, it was based on—I think it was a Vanderbilt—in the Waldorf-Astoria where she brought in the entire outdoors indoors,” Ammon says, adding that they heightened the colors and “vulgarity” of it, while also largely basing some elements on the English-style gardens Marie Antoinette brought to Versailles.

The event serves as a contrast to some of the more macabre imagery seen on the series, though there is still plenty of that while the characters try to solve an infant kidnapping and stumble across a trail of murder.

“We all would have to step back and reset ourselves to deal with the specific macabre of it all,” Ammon admits, while adding that figuring out how to reveal certain plot details in a respectful manner involved collaborating with other members of the crew, such as the director and director of photography. “It’s important to show it. It’s important to show it in the right tone.”

Ammon has worked on a variety of productions over the years; her TV credits include series like NBC’s Heroes and CBS’s Without a Trace. But working on the second season of The Alienist stood out to her because of how much creativity, research, and overall collaboration was involved in the world-building.

"Newspaper Row," as illustrated by concept art for "The Alienist: Angel of Darkness," is one of the new locations that was created for this season.

Ammon’s team also worked closely with the visual effects crew, helping by doing everything from designing buildings that could be used in postproduction to discussing how to move through a set or which camera angles to use.

“Truly for me, it was one of the most collaborative experiences—and not just on an intellectual level, but on an actual practical level where we had to view and touch and see things together,” she says. “And that was tremendously rewarding.”

The Alienist: Angel of Darkness will have a two-hour series premiere Sunday, July 19, on TNT at 9 p.m. ET.