Production designer Ruth Ammon takes us behind the scenes of the show's most beautiful (and most disturbing) sets.

The visual intrigue of The Alienist lies in its contradictions. The show shifts back and forth between the stunningly beautiful and the darkly disturbing as a trio of protagonists—Sara, John, and Dr. Kreizler—navigate the parallel worlds of Manhattan's 19th-century high society, and the city's criminal underbelly.

The show's production designer, Ruth Ammon, is the person who brought those worlds to life, recreating the 1897 New York we see on screen, but in modern day Budapest, where the show films. Here, Ammon takes T&C behind the scenes of the production, and breaks down the stories behind the show's iconic sets. 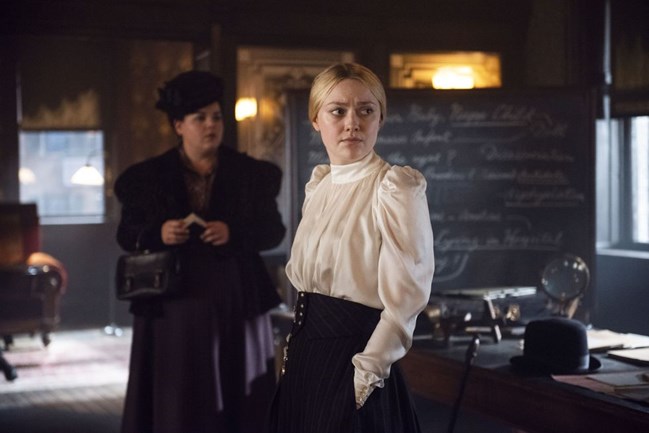 "Sara's world has changed quite a bit" in season two, explains Ammon. "We focused on Sara's new independence and entrepreneurialism, going out on her own and setting up a business, which was entirely new at that time."

Sara's office was a space where the design team wanted to balance the the more "perceived masculine elements" like the blunt architecture by "layering on feminine elements on top." 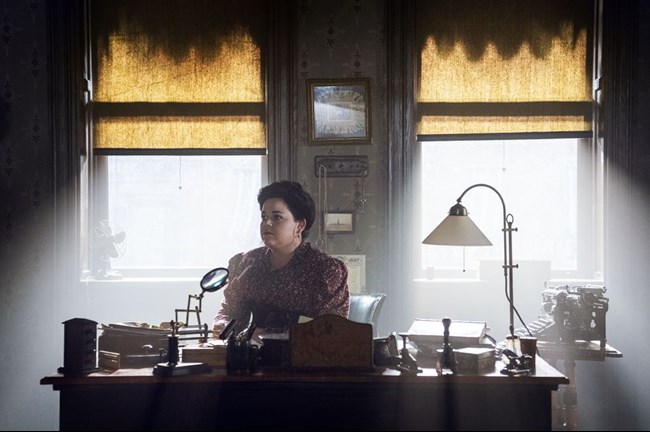 "We had a first room, which is very smart, well-tailored, had velvet fabric, little bits of lace, etching on the windows, and that gave it the feeling that would be okay for society women to come and sit and be interviewed."

The middle room (pictured above) was meant to be where the bulk of the actual detective work took place. "She has two female assistants: a secretary, and an actual junior detective, who sit where the work is going on," Ammon says.

"And then we gave her her own office for privacy marking her ownership and independence." 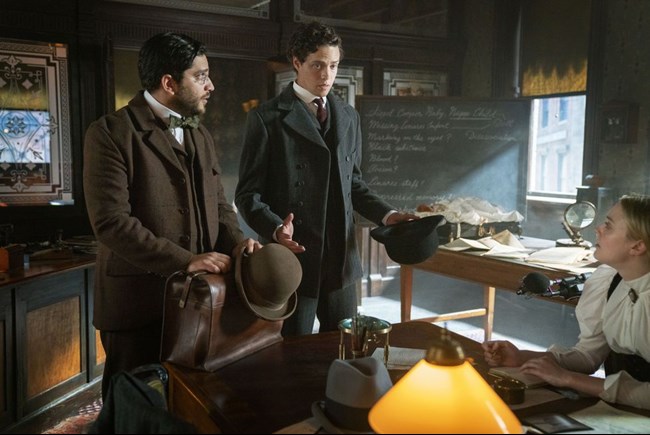 The biggest challenge this season, Ammon says, was creating the same aesthetic as season one, but in a story that took place mostly during the day.

"Five years time in New York at that period was such a visual change in fact on the city," she says, explaining the aesthetic shift between the seasons.

"Also, we were trying to create a dark, scary, horror story in broad daylight. So many of the scenes are written for daytime because it deals with mothers and every day life, and not a dark house of prostitution. It was very difficult creating that world in daylight. I think it was our biggest challenge." 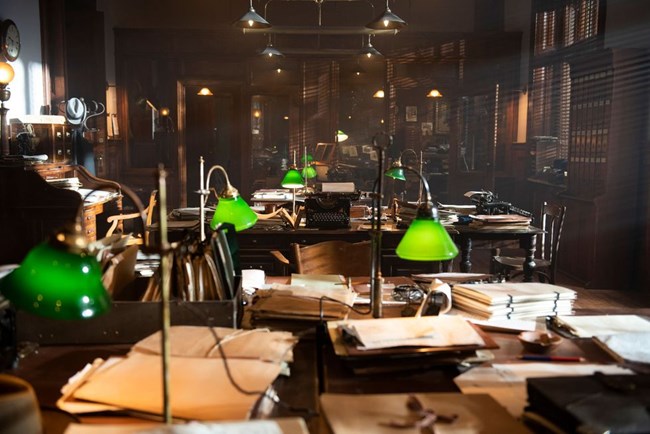 Ammon also wanted to visually reverse the roles of Sara and John in Angel of Darkness. "We saw John as more of an every day guy. Even though we know he was from a very elite family, he mixes in more. And so we wanted to put him into a bullpen situation where he was one of many people, in a more egalitarian world," Ammon says.

"With Sara, though she was in elite, high society, we put her in her own office. And you don't see a woman behind a desk, a room, a big desk in any reference during that period. We were switching those roles."

One of Ammon's favorite sets this season was Newspaper Row, the epicenter of the publishing industry.

"Newspaper Row in downtown New York was it was probably the busiest area during that period—and New York Times was there, the Herald was there, the Journal was there, and it was also the end of the train line, so it was this really, really congested space," she explains.

"We used one huge building in Budapest. I think it was closed down for renovations, so we were able to use the façade and part of the cobblestone street in front of it to create Newspaper Row. We built the street level of shops, and then above the shops we put all those gigantic billboards, which were like the pre-Twitter, the pre-Instagram. Instant notifications of news were painted and chalked in person with men up on scaffolding and ladders. The masses would stand outside and just watch this and react. It was like the first kind of control and manipulation of the news." 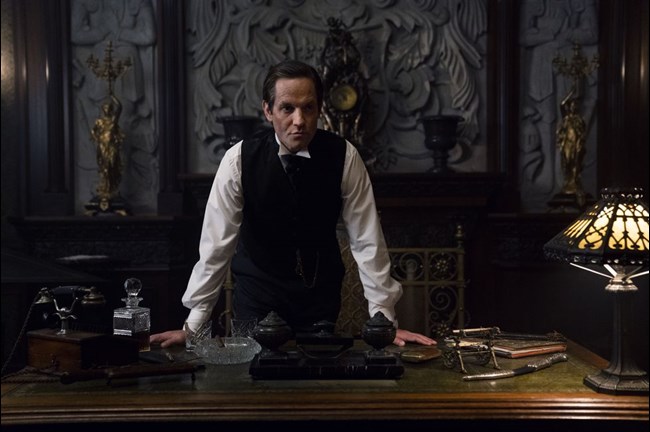 In William Randolph Hearst's office, Ammon wanted to show off his wealth, and his family's perchance for bringing back architectural treasures from their world travels. (And yes, it should be noted here that Town & Country is a Hearst publication, and part of a company founded by that same Hearst more than a century ago.)

"We built the fireplace behind his desk, and it was inspired by something in his mother's house. They had collected all these relics all over Europe. They collected a lot of antiques from all over the world: columns, gigantic marble fireplaces, and Greek statues. So that fireplace behind him, we sculpted and built specifically for him," she says.

"Because it was a younger Hearst, we were trying to not go overboard. It was his business office; it wasn't his home, but that was a lot of fun." 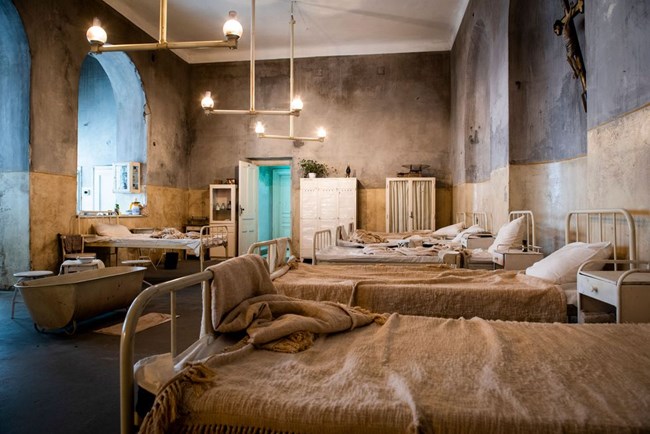 Ammon designed the maternity ward, a central location in the season's crimes, as if it were a labyrinth containing secrets.

"The area where patrons would meet the doctor was kind of clean and ordered, but as you walked your way around this maze of rooms and hallways, it would get more and more dark and dirty as you moved away from the public areas," she says. "Everything became more spare, and less colorful. We pulled the color away as you went deeper into the wards."

One way Ammon distinguished the hospital from some of the other sets this season was through lighting.

"We built the gas lighting fixtures that are hanging in the ward," she explains.

"In Sara's office and for the wealthier people we used electricity, which would have been fairly new at the time, but in the ward we used the gas light and candles to make it darker, scarier, and clearly less comfortable. Paring away things and seeing the bones of the furniture, there's nothing that's upholstered, there's nothing warm in there, and I think that the walls matched their little pale white bodies." 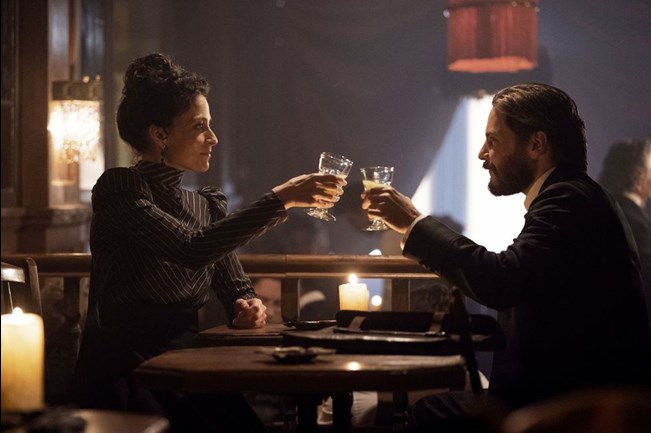 According to Ammon, absinthe bars during this time period were "a world where the very, very wealthy people kind of stepped away from their kind of rigid order and let their hair down a bit and mixed with artists, and musicians, and poets."

"For anyone in the art department, places like that always like really close to home." And while they knew bars like this one existed in New York in 1897, they're not well documented.

"So we were able to have a little fun with ours," Ammon explains. "And you see Dr. Kreizler stepping out. He's always so buttoned up; it was nice to see him let loose."