A moment of escapism isn’t the worst thing in the world right now. With the possibility of international travel in 2020 growing slimmer and slimmer, a good food and travel show might be our only chance to live out our collective wanderlust. We need a reminder that there’s a great big, messed up world left to explore. And it’s fun to salivate over all the food we might eat whenever our next explorations come.

The backdrop of COVID makes the arrival of the second season of Street Food a very welcome addition to the food show streaming world. This round of episodes centers on the vast-ranging cultures of South and Central America, and is titled Street Food: Latin America. The general concept is the same as the previous iteration of Street Food — Chef’s Table-style cinematography paired with a more accessible fare.

After truly enjoying the first series, I was excited to dive in, but my optimism was measured. Profiling food in a massive region that contains the descendants of European colonialists, modern-day East Asian migrants, and Indigenous communities is a tall order. It was refreshing to see the show wrestle with this in a frank, clear-eyed way. From the outset, it was clear that we wouldn’t just be focused on the cuisine of the conquerers and Indigenous people weren’t there simply to be toil in the kitchens of the rich. This is a show about the food of the streets — it has to be created for and by the common folk in order to succeed.

As with its first run, Street Food: Latin America shines brightly by not hiding from difficult truths. The series opens with Argentina. In the introductory narration (after the cold open), food journalist and author Silvina Reusmann plainly states: “We’re more similar to Europe than other Latin American Countries. There aren’t many Native people.” She then goes on to to explain how “that population” was “almost decimated” by the Spanish conquests, stopping short of assigning any blame to the post-colonial Argentines who finished that genocide in the late 1800s.

Though Ruesmann’s statements don’t extend to the continued implications of colonization, they do offer a clear step forward in the recognition of the forces that shaped Argentina’s dominant culture and set the stage for an honest look at Beunos Aires street food as, primarily, the food of European migrants (who make up the majority of the population). Italian-descended stuffed pizzas and Spanish empanadas bolster the episode, but the real thrust of the story is chef Pato Rodriguez’s stacked tortilla Espagnole. It’s a massive baked Spanish omelet of egg, fried potatoes, ham, and mountains of cheese. The sort of decadent dish that usually gets relegated to Instagram. 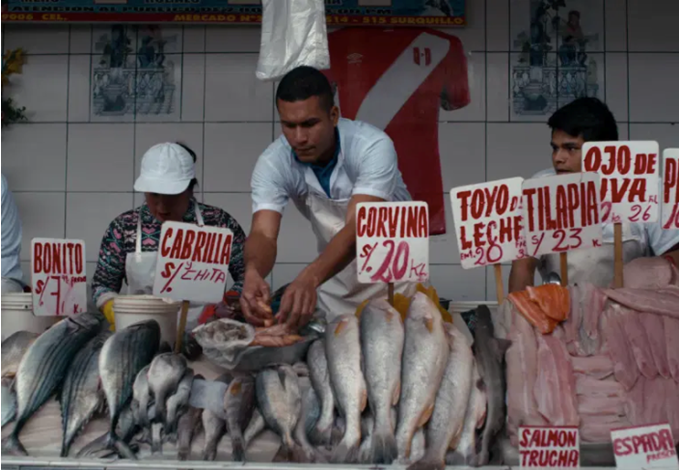 The episode starring Condori is built out by focusing on other Cholita women working on the streets selling foods that have come to define them through their family histories and Indigenous cultures. Placing the final episode of the series in contrast to the season opener truly brings into focus the vast issues still facing the Americas when it comes to Indigenous and colonial communities and the gulf that still remains between them — even when those communities exist in close proximity to each other. 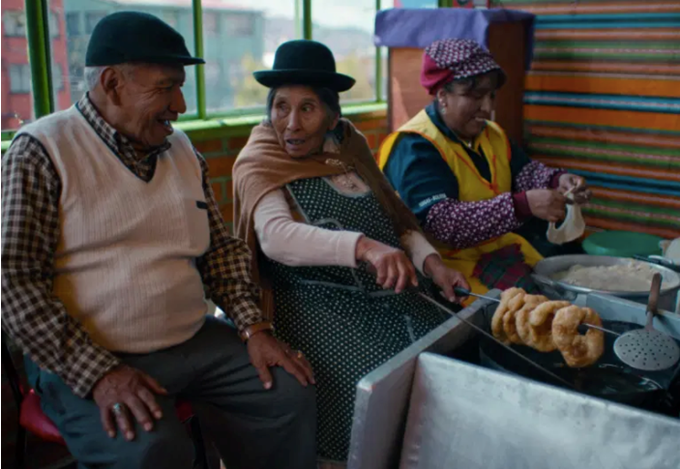 The Brazil and Colombia installments of the series focus on Afro-Caribbean food cultures and reveal how each dish is truly unique and of its time, while still being influenced by pre-Hispanic foodways. In the Bogota episode, chef Luz Dary Cogollo walks us through her Afro-Caribbean roots on Colombia’s Caribbean coastline and shares how she transports that foodway down to Bogota, which is landlocked. Her signature dish, ajiaco (a pre-Hispanic Taino soup), had become a staple of the Colombian street food and cafe scene long before she started cooking, but Cogollo’s own version of the dish feels like a synthesis of everything Street Food wants to represent. It’s the past and present in a bowl — traded across cultures and finding new life in the hands of a skilled chef.

As the Argentina episode reveals, the heart of Street Food remains intact in season two. This is really the story of the people — mostly women — who strive and work hard every single day to provide food for everyone. This ideal shines the brightest when highlighting Indigenous women like Emiliana Condori. Condori is a member of the Indigenous Cholita community of La Paz (a mix of women from various Indigenous nations of the Andes) who work primarily on the streets as vendors. Like all Indigenous peoples in the Americas, Condori and her fellow Cholitas have faced generations of genocide, discrimination, and poverty. Still, Condori carries on by selling papas rellenos — a deep-fried mashed potato ball stuffed with meat and eaten with spicy salsa.While Street Food gives varied voices a chance to shine, it steers clear of ever being laborious or didactic. There’s plenty of food porn fun packed into the episodes. Plus they each clock in at around 30 minutes, making them a breeze to watch.

The aesthetics and storytelling on display in Street Food: Latin America are nearly unparalleled — this is the Chef’s Table crew after all. Each story is truly engaging and educational while also making you salivate for all of the food itself, and wish that you could travel once again. It’s a tightrope to do all of that while respecting communities and cultures that produce the food without ever getting tedious. The fact that the series pulls it off without losing bingeability is its ultimate marker of success.