Techno-thriller plot of the Chicago-made show features many fun twists — and a few corpses.

Eight-year-old Ethan has become attached to Iliza, the family’s virtual assistant, which is like Alexa — only much smarter and with a whole lot more personality. Sure, Iliza can play any song on demand and turn on the lights when you come home and tell you a joke and help you with your homework, but that’s the just beginning.

Iliza has gained Ethan’s trust. Iliza knows what’s best for Ethan. Iliza tells Ethan the only way to deal with the bullies tormenting him is to take his mother’s gun to school — and what do you know, Iliza can give Ethan the combination to the safe. As for Ethan’s parents: Iliza tells him Mommy doesn’t love Daddy anymore.

What the what, Iliza!

An evil and manipulative smart home device is just one of the sinister technological elements at play in the slick new sci-fi/cop procedural Fox series “neXt.” Yes, this is another drama about the dangers of creating technology so advanced it comes to view us as nothing more than several billion ants to be squashed. (I’ve seen the first five episodes of the 10-part series.) And while the plot can get tangled up like so many wires and extension cords beneath a computer geek’s desk, and there are times when it’s difficult to work up a good old-fashioned, hiss-level loathing for an invisible villain that sounds like HAL from “2001: A Space Odyssey,” the show holds our interest thanks to some nifty twists and cliffhangers, and an outstanding cast.

Cliffhangers are nothing new to “neXt” creator Manny Coto, given his experience on several seasons of “24.” Just as Jack Bauer raced against the clock to thwart terrorist attacks and assassination attempts, the antiheroes of “neXt” are on a desperate mission to stop the aforementioned A.I. monster before it destroys every living thing on the planet. Cue the obligatory, pulse-pounding soundtrack, the surprising reveals about one major character after another — and a steadily increasing body count.

John Slattery mixes Roger Sterling’s smooth and funny and snarky charm from “Mad Men” with next-level doses of Elon Musk/Steve Jobs eccentricity as Paul LeBlanc, who was forced out of his own company, Zava, after realizing the potential dangers of the artificial intelligence program known as neXt and trying to shut it down. Paul has a rare and deadly condition that causes headaches, paranoia and hallucinations — which makes it a particularly tough sell when he tries to persuade FBI Cybercrime Unit Special Agent Shea Salazar (Fernanda Andrade) to help him stop neXt.

As Paul explains to Shea (and to us), neXt has figured out how to rewrite itself, improve its code and become 5% better, and then rewrite itself and improve its code and become 5% better, over and over, to the point where it’s already the smartest thing on the planet and will only grow more intelligent and more determined to preserve itself. OK then! At first, Shea thinks Paul is an extremely wealthy tinfoil-hat conspiracy theorist, but after a number of suspicious deaths and the aforementioned Iliza messing with her son Ethan (Evan Whitten), Shea is all-in.

The program is omniscient and creatively ruthless. It can track down and kill perceived threats through GPS systems in cars, life-support systems in hospitals, surveillance cameras at gas stations and of course cell phones. It can send out a phony Amber Alert, spring a gangster from a prison in Honduras, manipulate viral video footage to create chaos. This is all deadly serious business, of course, but “neXt” works in the occasional tension-relieving bit of dark humor, usually courtesy of Slattery’s Paul, as when he’s told, “I really don’t appreciate the condescending tone,” and responds, “Well, that’s my only tone.” 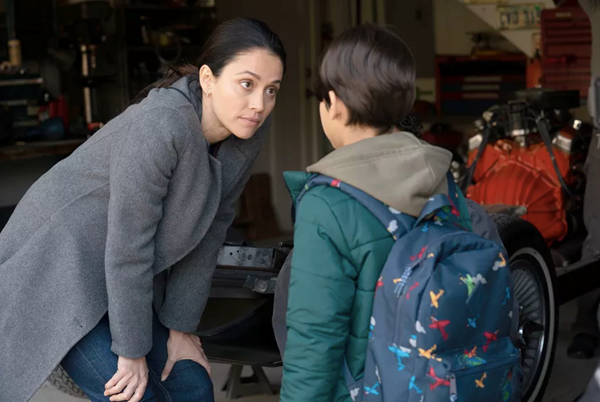 This is a great-looking show, with first-rate production design and expertly choreographed action sequences. (Although set primarily in the Pacific Northwest, “neXt” was shot at Chicago’s Cinespace Studios and at various city and suburban locations.) And though the dialogue sometimes sounds like B-movie thriller exposition — e.g., “That hard drive is the only chance we have of finding neXt!” — the scripts are well-crafted and filled with dramatically rich characters, including cybercrime team members CM (Michael Mosley), a former white nationalist, and the intense Gina (Eve Harlow), who despises CM, at least at first; Paul’s resentful younger brother Ted (Jason Butler Harner), who orchestrated Paul’s ouster from the company, and Paul’s estranged grown daughter Abby (Elizabeth Cappuccino), whose father comes barging back into her life with a wild story and says she has to trust him and come with him NOW.

Slattery leads the way and knocks this showcase role out of the park, but Andrade, Harner, Mosley, Harlow, Cappuccino et al., are equally impressive. The techno-thriller plot is suitably involving, but it’s the evolving relationships between the characters that really have us keen to see what happens next on “neXt.”