Headlines
Previous
A24 Acquires MARCEL THE SHELL WITH SHOES ON Movie; Lensed By Bianca Cline
Next

Marcel the Shell (with shoes on) is making the leap from the internet to the big screen.

A24 has acquired the North American rights to the feature film version of “Marcel the Shell With Shoes On,” after its 2021 Telluride Film Festival debut, in a deal negotiated by WME Independent and CAA Media Finance.

“Marcel the Shell With Shoes On” is based on Dean Fleischer Camp and Jenny Slate’s beloved stop-motion animated short films of the same name, which have garnered over 50 million views on YouTube since their 2010 debut, plus two New York Times best-selling children’s books. Slate voices Marcel, an adorable one-inch-tall seashell who lives a colorful existence with his grandmother Connie (Isabella Rossellini) and their pet lint, Alan.

Directed by Camp — who also wrote the screenplay alongside Slate and Nick Paley, from a story by Camp, Slate, Paley, and Elisabeth Holm — “Marcel the Shell With Shoes On” marks the character’s big-screen debut in what’s described as a “hilarious and heartwarming story about finding connection in the smallest corners.”

The 90-minute movie chronicles the journey of Marcel and Connie, who were once part of a sprawling community of shells, yet now live alone as the sole survivors of a mysterious tragedy. “But when a documentary filmmaker discovers them amongst the clutter of his Airbnb,” the film’s official logline explains, “the short film he posts online brings Marcel millions of passionate fans, as well as unprecedented dangers and a new hope at finding his long-lost family.”

Rosa Salazar, Thomas Mann and Lesley Stahl round out the cast for the film, which debuted at Telluride in September to critical and audience acclaim. Variety chief film critic Peter Debruge wrote in his review that “it’s hard to believe that a googly-eyed shell and a silly voice can sustain an entire movie, and yet Jenny Slate’s adorable creation proves irresistible.”

“Marcel the Shell With Shoes On” was produced by Holm, Andrew Goldman, Caroline Kaplan and Paul Mezey, with Camp, Slate and Terry Leonard also on board as producers. Executive producers are Philipp Engelhorn, William Byerley, Nion McEvoy, George Rush and Michael Raisler. 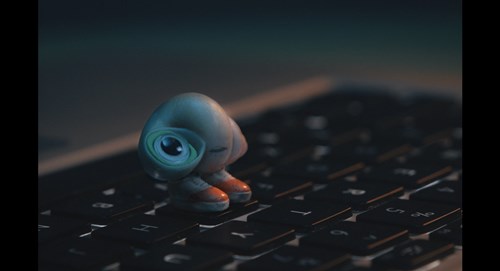