Bianca Cline press
Previous
A Little Mollusk in a Big World in the First Look at MARCEL THE SHELL WITH SHOES Movie, Lensed by Bianca Cline
Next

A small shell is coming to the big screen.

Marcel the Shell With Shoes On, the feature-length adaptation of Dean Fleischer Camp and Jenny Slate's series of popular short films and New York Times-bestselling books, marks the feature debut of the internet's most beloved mollusk. It will make its bow at the Telluride Film Festival on Friday, but EW can exclusively debut the (adorable!) first look now, below.

Per the film's official synopsis, Marcel follows down-and-out documentary filmmaker Dean (played by Fleischer Camp, who also serves as the film's co-writer and director), who moves into an Airbnb and quickly discovers that he's not alone. Marcel (Slate, who also co-wrote the screenplay), an adorable one-inch-tall shell, already lives there with his grandmother Connie (Isabella Rossellini) and their pet lint, Alan.

Once part of a sprawling community of shells, Marcel and Connie now live alone as the sole survivors of a mysterious tragedy. Taken with his unlikely new friend, Dean starts filming Marcel and his grandmother, igniting a meteoric rise to internet fame that changes their lives forever. But will Marcel's newfound sense of possibility and a throng of superfans be enough to track down his long-lost family? 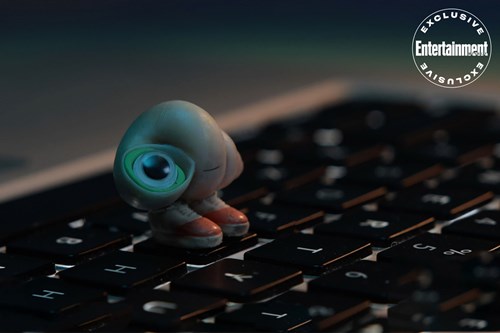 'Marcel the Shell With Shoes On' | CREDIT: GABRIELLE RUSSOMANGO

"What I love so much is that the original impulses that made Marcel who he is (my impulses as a performer, Dean's as a director) have always stayed true," Slate tells EW of the film over email. "The filmmaking process was careful and deliberate, very creatively open, and extremely hopeful at its core. I'm really glad that, especially right now, we can finally offer this small and astounding sweetness to the very big world out there."

"Expanding Marcel's world in this way is a dream I've been working toward for many years, but we took our time because he means so much to us," Fleischer Camp says. "We felt a responsibility to do it right, and I think we did!"

In addition to Fleischer Camp and Slate, Nick Paley also co-wrote the film based on a story by the three of them and Elisabeth Holm. Fleischer Camp, Slate, and Holm also produced the film alongside Andrew Goldman, Caroline Kaplan, Paul Mezey, and Terry Leonard. Rosa Salazar, Thomas Mann, and Lesley Stahl (as herself) round out the film's cast.

Marcel the Shell With Shoes On will have its world premiere on Friday, Sept. 3 at The Chuck Jones Theater in Telluride.