Headlines
Previous
Short of the Week Feature: JIM, "DP Sean Conaty’s Camera Heighten the Surreality of the Scene"
Next

A Black middle-school student faces an awkward moment as his class reads a beloved American novel.

COMEDY ABOUT IDENTITY IN LIVE-ACTION

by Jason Sondhi, Short of the Week

A thought-provoking satire, Chris Black’s debut short, Jim, gleefully dives into a series of hot-button American cultural issues in a potent comedy of racial cringe. Both blunt in its targets yet sharp in its insights, Black tackles the condescension experienced by Charles, a young African American student, in his otherwise White classroom. After a well-meaning but patronizing 1-on-1 with his teacher before class, Charles participates in a classroom reading of one of the enduring literary emblems of America’s racist legacy—The Adventures of Huckleberry Finn. The results are painful, yet absurdly funny.

There is a lot packed into the short’s 6min runtime as Jim explores the isolating and demeaning feelings that arise from being Black in White spaces. Drawing upon a lifetime of experience in the subject (and over a decade in the predominately White film industry) Black demonstrates how, rather than serving as a salve, political correctness can compound this sensation. An acknowledgment of race does not equate to sensitivity towards it, and it is the clumsy gestures in recognizing “difference“ (and the thinly-veiled prejudices just under the surface) that produce the outrageous farce of the film’s plot. In a practice common to American classrooms, the students take turns reading aloud from the book, but, whenever a sentence has the N-word in it (and this occurs over 200 times in Huckleberry Finn!), the teacher quickly swoops in to ask Charles to read that section.

“There is an absurdity to black life. And that’s basically what I want to explore. That’s why satire is great. It allows me to ask questions without being too serious and bringing the mood down too much. Tone was a fine balance.” – Chris Black

The above quote, borrowed from an unpublished interview of Black with Nate Cornett, identifies tone as essential to the efficacy of Jim. While the film references ever-burning debates in American society over the appropriate use of the N-word, the content of compulsory reading lists in schools, and both overt and covert racism, Black does not hammer these political points in a quest for pat proclamations on the state of race relations. The filmmaker’s aim is more subtle—to entertain, but also, through it, to illuminate—and his ability to cathartically communicate the particular, yet widely-shared truth of Jim’s scenario weighed on his mind during development.

Originally designed as a more overt comedy sketch, Black dialed back the slapstick in order to elevate its more nuanced aspects. The dilemma appears analogous to what Dave Chappelle experienced over a decade ago, where, at the height of his powers, the comedian famously bolted from the production of Season 3 of his hit show after experiencing an artistic crisis. Chappelle realized that, at a certain point, the deeper meaning of his work—to lampoon the idiocy of bigotry and stereotyping—was being received by audiences as a surface-level celebration of them. Black underwent a similar thought process, “I realized if I were to go that way, the message is gonna be lost. People will be like ‘This is so funny’ but they’re not gonna walk away with an impact. I think that’s what I strive for in my work – I want to say something without holding a megaphone and being like ‘This is what I have to say!’”

The arrival of “Janitor Jim”, an explicit allusion to “Huckleberry Finn”, is a sharp diversion within the film.

Essential to this more modulated approach to the material is the dreamy turning point of the film, where the Mark Twain novel is explicitly evoked. Charles witnesses Janitor “Jim” cleaning up in the hallway, his mop a symbolic oar. Sound design and a slow push from DP Sean Conaty’s camera heighten the surreality of the scene, as the literary and the real collide at this moment in an apt convergence for a film so attuned to language (the teacher’s self-conscious use of “momma”, the coded deployment of compliments like “articulate”). Charles, at that moment, has an epiphany about the issues language cannot gloss over, things like history and class and power. The fussy attention paid to his Blackness is revealed as a self-serving deflection from an honest engagement with the deeper implications of that status.

Jim is a very funny farce, but beneath it is a serious film about missing the point—how creating spaces where explicit racism is ostracized does not obviate dislocation, and how outward gestures towards inclusivity can be window-dressing for a malignancy underneath. Though Black does not want to use a “megaphone”, the lesson of Jim is sharp and predicted much of the racial discourse of our past year by looking beyond blatant examples of monstrous behavior to grapple with the slippery, systemic realities that still remain. The more I return to the film, the more I see it as a slice of genius, and the product of a creative voice we could very much use right now.

Jim is astonishingly assured in both its voice and production for a debut, but, at the time of production, Black was not a typical first-time filmmaker. Well-known in commercial and music video realms as a producer, his work includes the excellent brand film That B.E.A.T which we featured on S/W in 2013, as well as projects for top artists like Earl Sweatshirt and A$AP Rocky. His frequent collaborator, Portugal. The Man, executive produced Jim alongside directing luminaries AG Rojas and Daniel Wolfe, and these collaborators, as well as Black’s track record as both a producer and a burgeoning commercial and MV director, stirred an unusual amount of interest surrounding Jim upon its completion in early 2019.

A successful crowdfunding campaign further built anticipation and Chris sent the film my way in February of that year as a potential pick for Black History Month. “Brother Sondhi!” was the intro to his email, emblematic of the effortless way his larger-than-life persona created a feeling of ease and inclusion in others. Upon viewing Jim we were enthused by the idea, but the prospect of a festival-run ended up swaying him to wait. A plum debut at the Maryland Film Festival followed, with a proud Chris in attendance. Palm Springs Shortfest was on deck for June, but Black wouldn’t make the short trip from Los Angeles to the desert—on May 20th the filmmaker unexpectedly passed away. 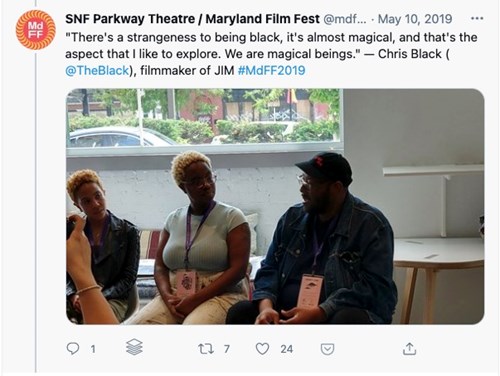 “All the best directors I know, you couldn’t stop them from making something. They’re going to do it.” That is a quote from Black in response to a question about whether he felt anxiety in transitioning from music videos to scripted film. Chris Black certainly “made something”—something we think is quite special. I can’t help but regret the loss of many other special things I’m sure he would have made had his time not come to an abrupt end. A celebration of Black’s life and work was organized in August of that year, and Jim made its L.A. debut, allowing his friends and community the opportunity to mourn, reminisce, and view his final work.

Knowing that Chris was so enthusiastic about the prospect of sharing the film far and wide via the internet, I have, over the past couple of years, felt a twinge when spotting Jim in our database of accepted films yet to be released. Running into John Merizalde, an S/W alum and frequent collaborator of Black’s, I brought up the prospect of a posthumous release. Thanks to the efforts of John, AG Rojas, and the permission of Black’s family, we’re proud to present the online premiere of Jim today and hope that the release helps to celebrate his talent and serve as a remembrance for a gifted artist who still had much to say.