America loves its content, and that was especially true in 2021, when the country spent some 15 million years watching movies and shows. To our surprise, though, Netflix’s global phenomenon Squid Game did not beat two iconic Canadian TV shows.

According to a ranking from Nielsen, the global TV and movie ratings firm, it used its massive reach in both streaming and traditional TV to figure out which names were most popular across a variety of streaming content- original shows, acquired shows, and movies. 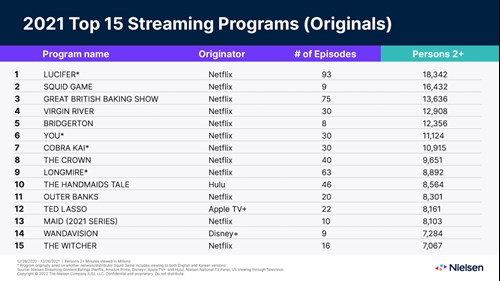 Now, Squid Game‘s numbers were nothing to shake a stick at, to be sure.

With just 9 episodes total, the show managed to rake in some 16.4 billion minutes of watching in the states, and was second only to Lucifer, which had 18.3 billion but with over ten times the episodes available to watch. 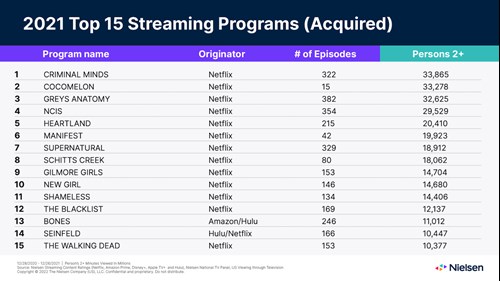 But, things get even more interesting when you include the ‘Acquired’ content. That’s because two of Canada’s most iconic shows, Heartland and Schitt’s Creek, quietly proved to be more popular than Squid Game.

Having become the longest-running drama series in Canada years ago, Heartland adapted a series of popular novels for the Canadian prairies, with Alberta serving as the filming location and the in-show setting. And with 20.4 billion minutes watched in the States, it seems like our neighbours to the south love it too!

Meanwhile, Dan and Eugene Levy’s Schitt’s Creek was more or less an instant success in Canada, but didn’t really see international recognition until the penultimate season. Here, things get even more impressive, as the show almost matched the popularity of Lucifer, with only 80 (30-minute) episodes grabbing just over 18 billion minutes.

Hmm, are these Canadian shows outperforming even Squid Game a reminder for us to give them another watch? We think so.