The new Apple TV+ show Dickinson may be set in the 1850s, but it isn't your typical period piece. It’s historic, but remixed and refreshed—from the music (which includes Billie Eilish and Lizzo) to the sets. “Dickinson is basically a coming-of-age story about a radical young female artist who was ahead of her time,” says the show's creator, Alena Smith. “If she wasn’t understood in her time, can we understand her better in ours? The word collage probably best encapsulates my entire process with this show. Essentially, what I’ve done is built up this enormous store of inspirational facts and fragments and pasted them together to create this picture of Emily coming to life in our moment.”

The result? A microcosm that transcends time, thanks to modern-feeling visual elements like saturated hues. “When people think about a period piece, it can come across as drab and dry and boring in a sense,” says Hailee Steinfeld—who stars as Dickinson’s Emily Dickinson. “You think of a period piece and your head sometimes goes to black and white. What’s so special about the wallpaper on the walls in the Dickinson home is that it is incredibly accurate. There were these bright, interesting, psychedelic patterns that catch people by surprise. It feels very now.” 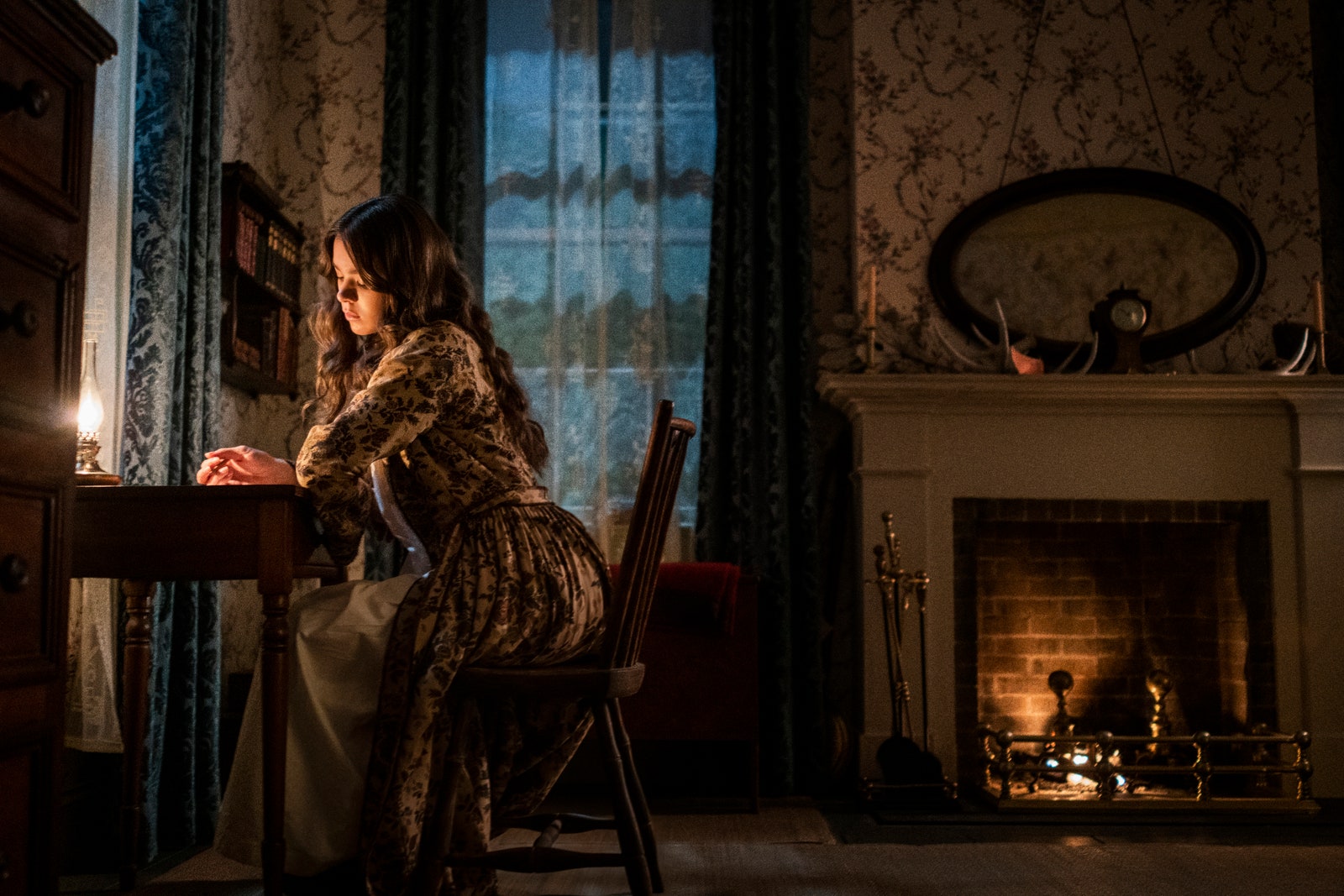 The series is based in the home that Emily Dickinson shared with her parents. The famous house—now the Emily Dickinson Museum in Amherst, Massachusetts—was re-created for Dickinson in two sets (one for each floor). The exteriors were constructed in Bethpage, New York. “Since Emily is a person that lived her whole life in one house, it was really important that each of the rooms be its own character—and its own kind of magic,” says Smith. “Women’s lives were confined to these domestic spaces.” 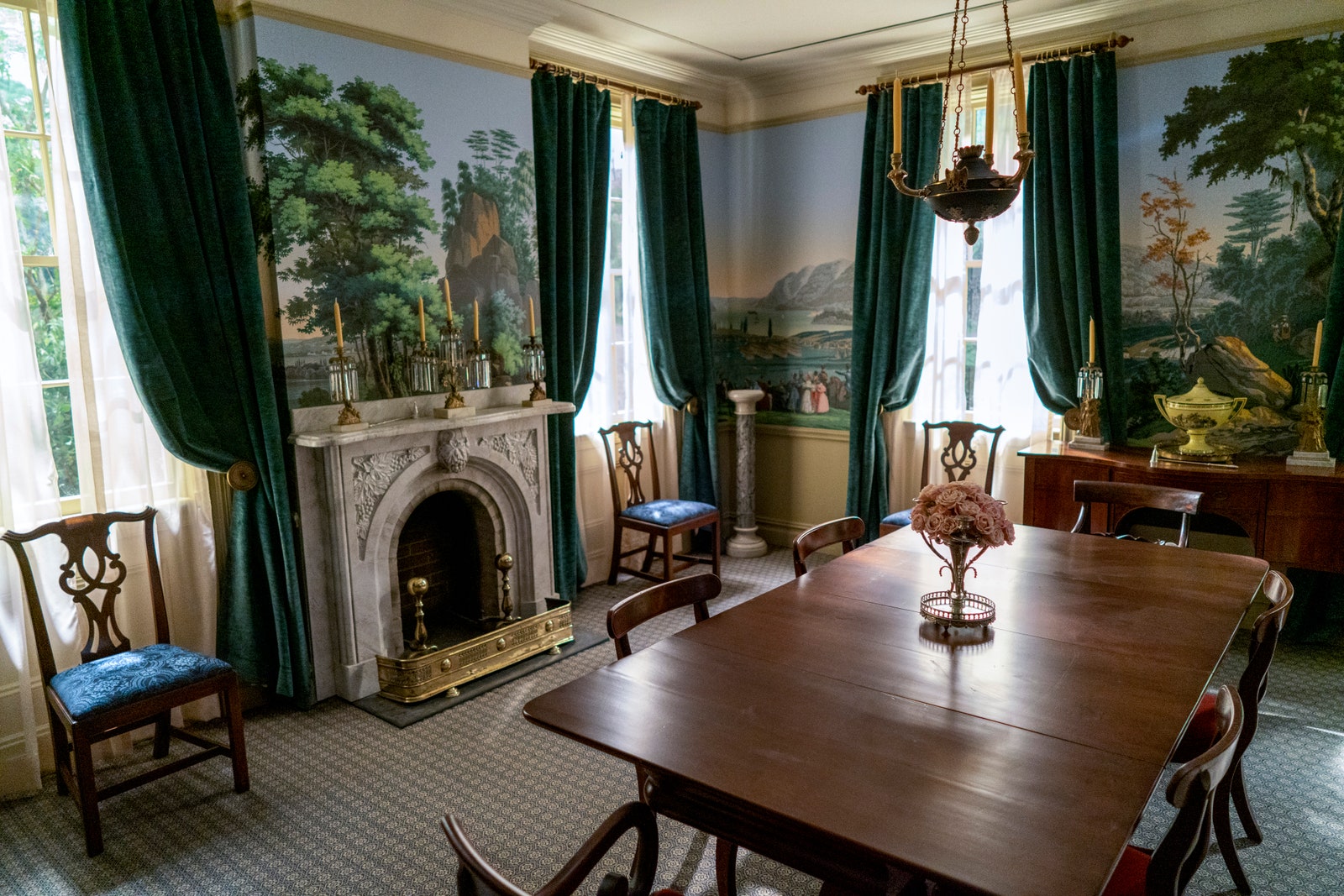 Some of the historic details that contribute to Dickinson’s tone include blown-glass windows and candles (since the 1850s predate electric bulbs). The interiors are true to the time—but infused with bold colors that make them seem current. “Since Dickinson was going to be a contemporary interpretation of the poet, I decided that we didn’t need to approach the design as a historical re-creation,” says production designer Loren Weeks. “I wanted to be honest to the historical period, but not beholden to it. As it turned out, the majority of finishes we used were period-appropriate with the introduction of contemporary wallpaper, fabric, or color here and there.” 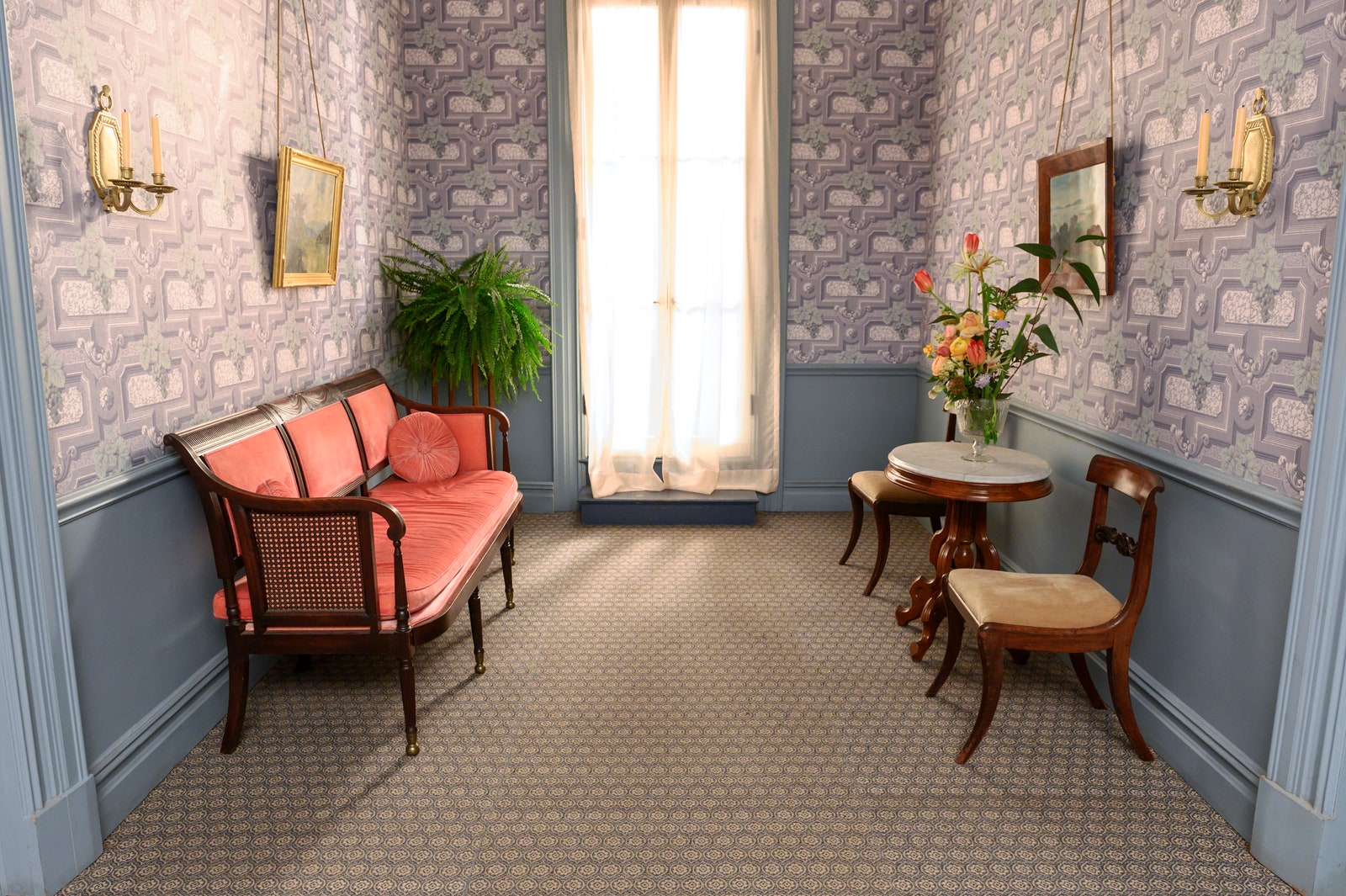 The wallpapers, for example, were sourced from centuries-old brands, including Adelphi Paper Hangings, Historic New England, and Waterhouse Wallhangings’ Thomas Strahan Collection. The lush scene that is installed in the dining room is from Zuber. “The wallpaper in the dining room was a fantastic coup when we were able to make arrangements with Zuber, a French wallpaper company that has been in existence since 1797,” says Weeks. “The woodblocks were carved in 1834, when the paper was first produced.” 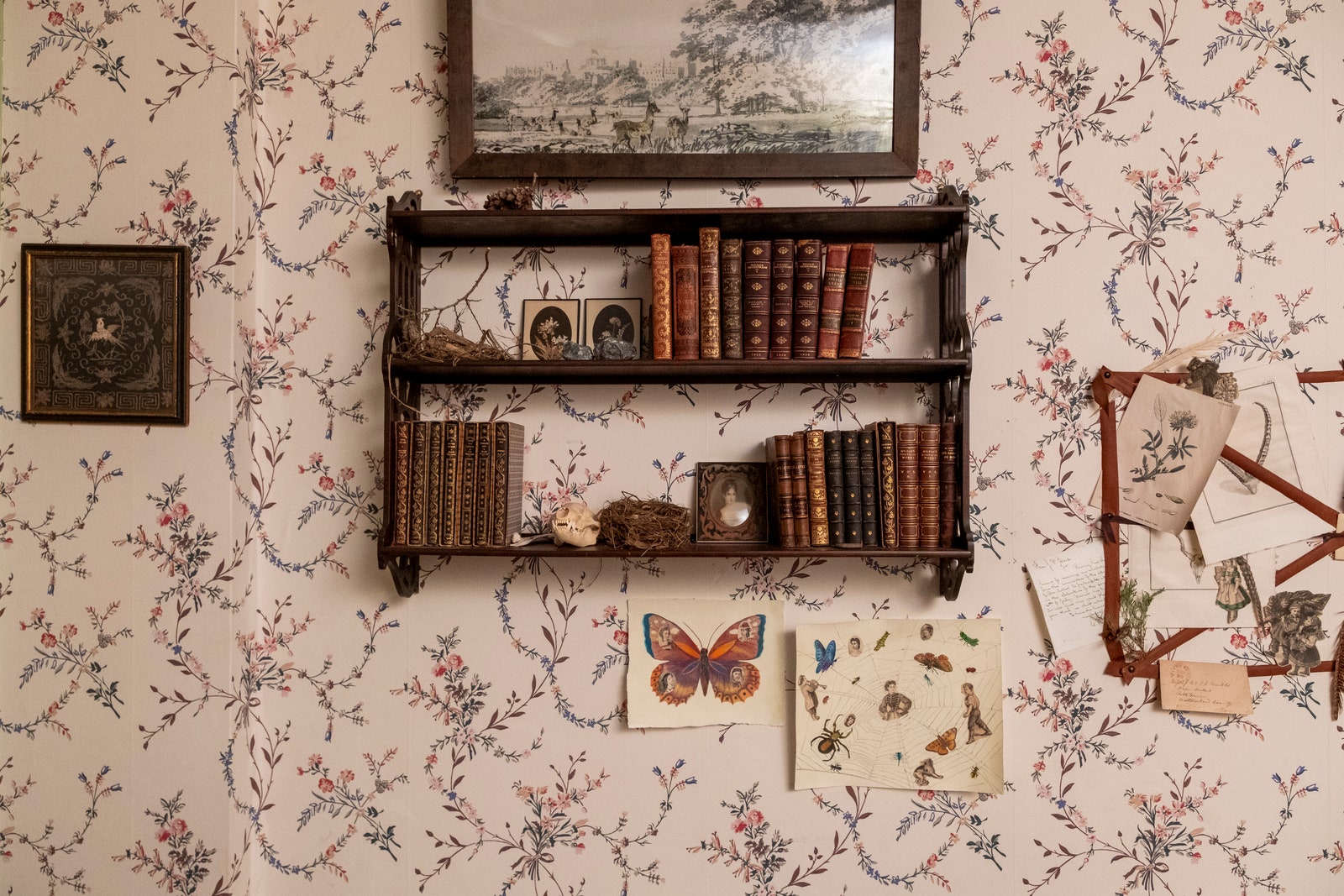 On the second floor, Emily Dickinson’s bedroom is full of representations of the character’s passions, with books, flowers, and shells on display. The decoration is feminine, featuring botanic patterns and lace. The furnishings (like the desk and the twin-size bed) match the ones that can be seen in the museum. “We brought the room to life with plants and natural specimens that Emily might have found on her walks,” says Smith. "Then, we had these collages made that look like something a girl would make today on her Tumblr page. They have these girls’ faces from magazines that have been glued onto butterflies or spiders. These things were really made by bored women in the 1850s.” Steinfeld adds: “The foundation feels juvenile in a sense that this was her childhood home, but she would cover the walls with what represented her growth and her mind, like flowers and sketches and whatever she found inspirational.” 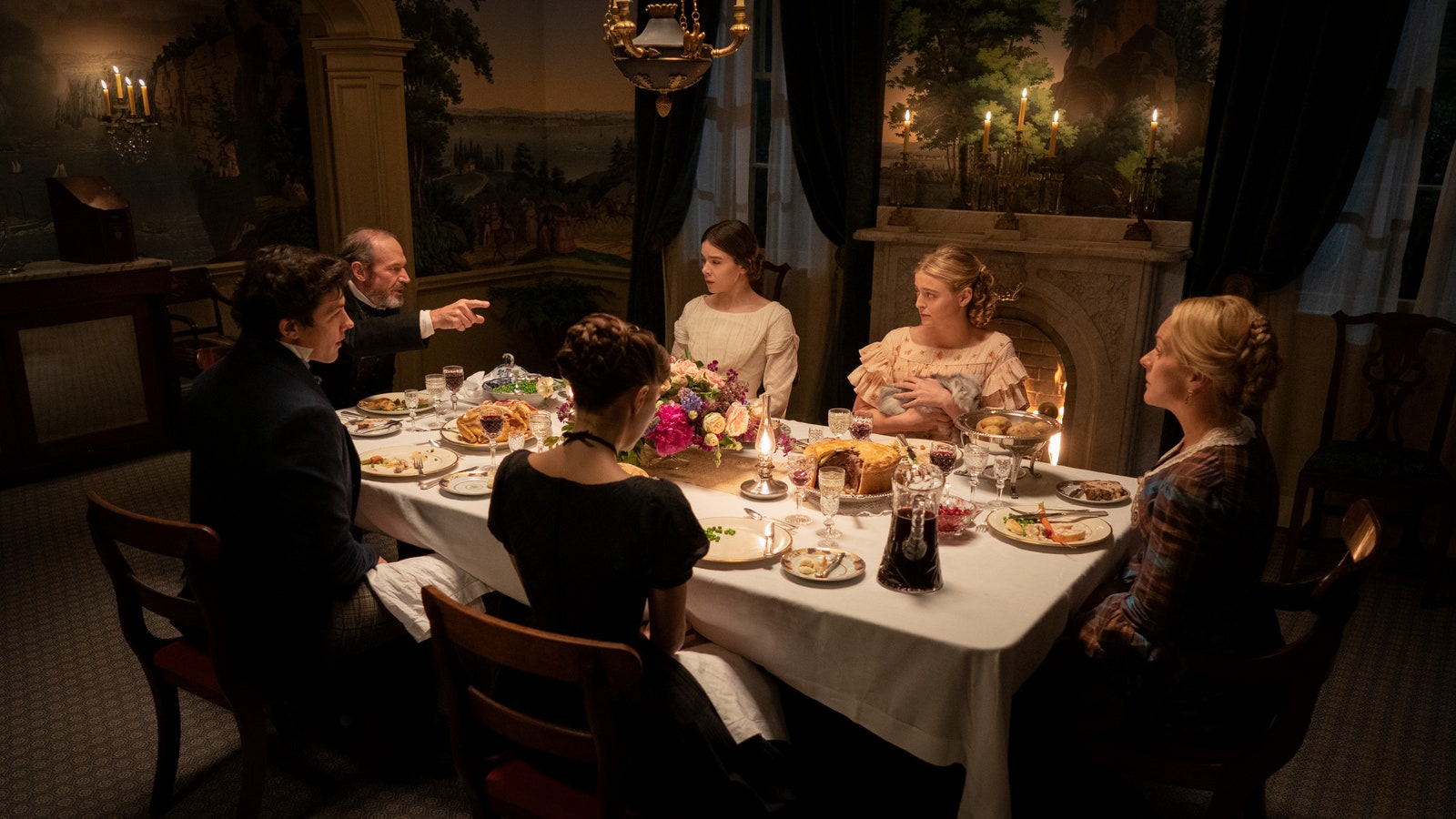 Smith was drawn to director Jane Campion’s Bright Star for inspiration. “It’s about the poet John Keats and it’s this, quote, unquote, 'period-accurate film that explodes with visual color,'” she explains. Wes Anderson’s The Royal Tenenbaums was also influential. “The Tenenbaums, much like the Dickinsons, were this codependent, overly attached family that can’t let each other go," she says. "You can’t really tell what period they’re in. [Anderson] kind of invents his own world that transcends a specific period.”