In The United States vs. Billie Holiday, which is now streaming on Hulu and stars Andra Day in the titular role, viewers follow the legendary singer’s career throughout the 1940s and 1950s as she’s subjected to an undercover sting operation by the federal narcotics department. The production schedule ran at a rapid-fire pace: The crew was tasked with building 80 sets in less than 45 days. 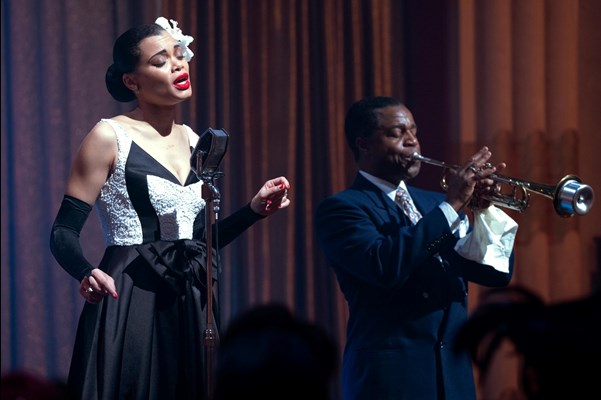 “All the stage colors were strong , but also toned down, so she would glow in her magnificent gowns for each show,” de Blois says. Photo: Takashi Seida

“It was quite a fabulous race,” says set decorator Elise de Blois. “It was a very big challenge to be accurate and precise in history with this period. We took great attention to color [and] texture—I wanted to work a lot with wallpapers.”

She sourced many of the intricate wallpapers from Secondhand Rose in New York City, which carries original wallpaper from this era. In some cases, they were so old and fragile that the graphics department had to scan and reprint them for practical use. The various dressing rooms where Holiday and her entourage gather before and after a performance serve as the perfect backdrop for these designs to really shine. 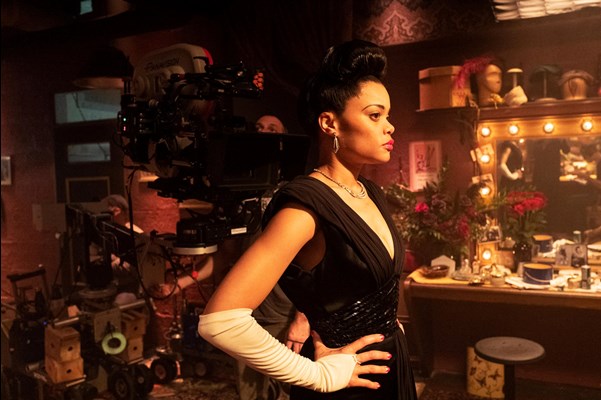 “The idea was to have each dressing room have its own iconic feel, giving the audience something to remember about each,” explains Daniel Dorrance, the film’s production designer. “I wanted to convey faded opulence, ultimately showing all the sets with an aged beauty.” 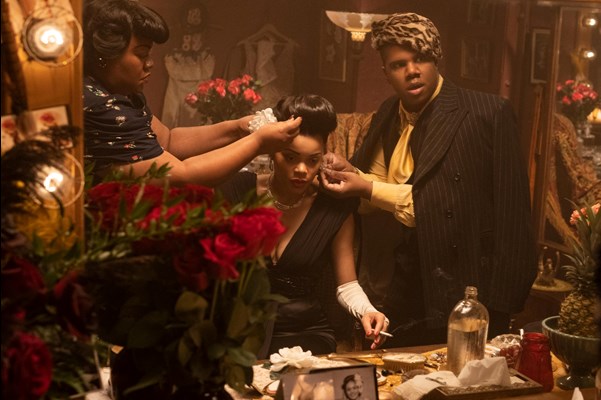 De Blois particularly loves the Carnegie Hall dressing room. “It’s super warm. It’s dark red and gold velvet. The textures are very comforting. The lights are very dim and gold. Dressing rooms were sort of like candies to make, because it’s the place where [Billie] felt most comfortable.”

During her research, de Blois discovered a photo of Holiday’s actual Carnegie dressing room, which was filled with “mountains of flowers,” various knickknacks, beauty products, and fresh fruit. “We put a pineapple on a plate in the dressing room because in the reference picture, she had one.”

The film unfolds like a stage play. Scenes transition from one to the next with the sets morphing and blending together, bending and stretching the limitations of storytelling through set design. One example of this approach in action is when Holiday witnesses a lynching outside a rural home, which she then stumbles into in hysteria over what she just saw. The home gradually becomes a stage where she performs “Strange Fruit”—the song about the lynchings of Black Americans that has made her a target of the U.S. government.

“Lee [Daniels] wanted this sort of out-of-body experience for Billie,” Dorrance says. “She would witness the hanging, stumble into the shack, and be consoled by various members of her band and crew, and then end up on stage singing ‘Strange Fruit.’ The shack had no interior walls, which allowed us to create our own layout and path.”

Holiday’s walk was shot with a Steadicam, so they needed to move walls as she walked from room to room. They had standby carpenters behind certain walls, and as the Steadicam operator walked ahead of Day and led her between spaces, the walls would slide in and out, “to make the hallways feel longer, and the rooms feel small and cramped as they would be in a shack of this size.” 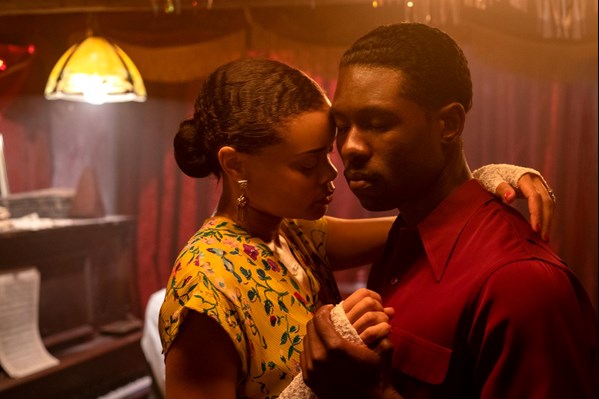 “If it flows and feels natural and original, that would be the best gift for me. I want the people to feel it, to have emotion looking at it,” says de Blois. Photo: Takashi Seida

The club interiors proved to be the most challenging to design and build, from both a time and space perspective. “In the end we had seven different clubs to design and dress, places that were all driven by the availability of the venue,” Dorrance says. “In most cases, we felt fortunate if we had five days to prep, which includes construction, paint, set dressing, and lighting.”

Though many of the clubs were shot on location, the set for Café Society—the New York City nightclub where Holiday first sang “Strange Fruit”—was built on a stage. “I had a hard time finding a location that would give us the space and time to perform and the visuals needed, and that would also suit the shooting schedule,” Dorrance says. “It worked out for us, as weather in Montreal became a factor, and we needed a place to go for cover when it snowed late in the schedule.”