Headlines
Previous
How the DP & PD Daniel Dorrance of THE UNITED STATES VS. BILLIE HOLIDAY Met the Moment
Next

by Mark London Williams, The Credits

It’s not often there’s a Golden Globe nomination for an African American actress playing a famous blues or jazz singer. This year, there are two of them.

One is for Viola Davis, going chop-to-chop with the late, great Chadwick Boseman in the Netflix adaptation of August Wilson’s Ma Rainey’s Black Bottom, playing the titular character. The other is for singer and actress Andra Day, also playing “titular” in Hulu’s The United States vs. Billie Holiday, which premieres on February 26. And by “titular,” we don’t mean “the United States,” which comes across as shockingly (or perhaps not) relentless in hounding Holiday for her addictions, all the way to her death at age 44, cuffed to a New York hospital bed.

While Davis’s range and acumen as an actor have been clearly on display and appropriately celebrated, Day, perhaps previously best known for soundtrack performances, including on the Jackie Robinson-themed short Rise, and as a voice in Cars 3, makes what is essentially an astonishing debut, fully inhabiting the dissolute, sad, yet bravely defiant persona of “Lady Day,” one of the greatest jazz singers—heck, singers—the country has ever produced. 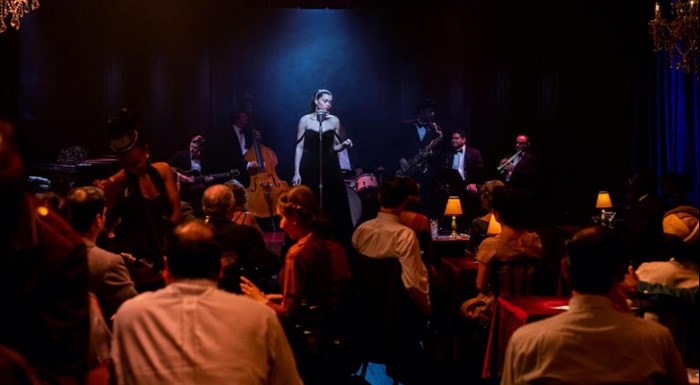 Except that this country, the film shows, had an obsessive, laser-like focus to get her to stop singing her “subversive” song Strange Fruit, which famously took the “subversive” position that lynching was a horrific thing.

And if you think the film, a long-gestating passion project for producer/director Lee Daniels, is taking a hyperbolic approach to that obsession, personified by the head of the Federal Bureau of Narcotics, Harry Anslinger (played by an unremitting Garret Hedlund), well, it’s all from journalist Johann Hari’s disturbing, well-sourced book “Chasing The Scream: The First and Last Days of the War on Drugs,” and is adapted by Pulitzer Prize-winning playwright Suzan-Lori Parks. 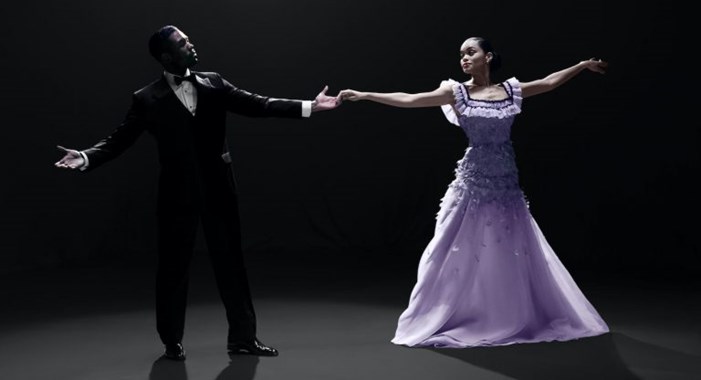 Coarse and rage-filled lines about the need to get Holiday to stop singing “that song,” which may at first sound too on the nose, are, sadly, not so much made up, as brought into light via FOIA requests and research.

Daniels “first talked about doing this years ago,” recounts cinematographer Andrew Dunn. “It was on and off,” and Dunn confesses he “never thought we’d do it,” and in fact, they’d talked instead about a Richard Pryor biopic that had been similarly gestating. “The journey to get here was quite long,” he says, but then Daniels methodology is to “sow seeds of ideas…sometimes these seeds would germinate in a certain way (and) then this magic happens.”

Dunn has been there for that particular conjuring three times previously, with The Butler, Precious, and the pilot for Empire.

For all that journeying, Dunn likes the way each new piece is a discovery. “It wasn’t a laid-out plan,” he says of capturing the essences of certain scenes. Lighting was arranged so they could “react without looking like we have to dictate, (instead) feeding off performances and actors. Andra particularly had a relationship with the camera. She just gives this little sidelong glance drawing the audience in. (You) create this space for the actor to be inside there, and to get the audience inside. Then you punctuate it, in a Sidney Lumet way; he equated making a film with a symphony, with high moments, and lows again before the crescendos.”

Or perhaps improvisational jazz in this case, given the way Holliday was influenced by Louis Armstrong’s musical phrasing, and thereby changed pop vocalizing in the 20th century.

“Once I knew the project was 90% happening,” he says, “I did a concept piece for Lee, with Andra, who dresses in retro fashion in real life.” The piece involved taking a colorized, 40’s-era Times Square shot, then photoshopping Day’s picture into it.

Not only did it suit some of the motifs and iconography Daniels was looking for, but it became an image the director wanted to recreate for the film. Which was made more challenging because Montreal was doubling for period NY throughout the shoot.

After losing a former bordello that was sold before the film company could turn it into the three different sets Dorrance had envisioned there, they “found this old hospital in Montreal that had these old interiors. That was built in the early 1920s,” and was used primarily for the proverbial G-men. “Anything government or police-like, I played as a monotone, not exciting like Billie’s world, which had a lot more color or energy.” 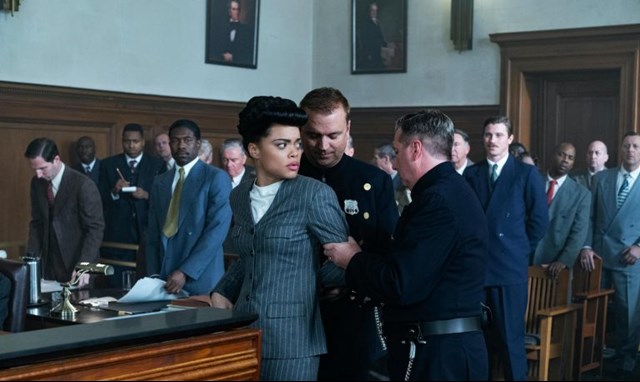 He also mentions a scene “in the middle of the film, when Billie has this out-of-body experience, where she stumbles into a lynching that had just happened, and goes into this shot, different friends appear that were on the (tour) bus. Are we in a dream sequence? Or where are we here?”

The sequence “culminates with her singing at Carnegie. She stumbles through this shot, through curtains, and the next thing you know she’s on stage in Carnegie Hall.”

It’s at Carnegie Hall where, looking at the government agents in the audience, she has to decide whether to sing Strange Fruit again.

To get Day through the sequence, Dorrance says they “had to take walls away to allow the camera to walk through,” for the Steadicam work. “You kind of want this magic to happen,” he says, echoing Dunn.

To capture that magic, Dunn shot on film, using a pair of Panaflex cameras with C and E Series anamorphic glass. “Some of these lenses are fifty, sixty years old,” he notes. 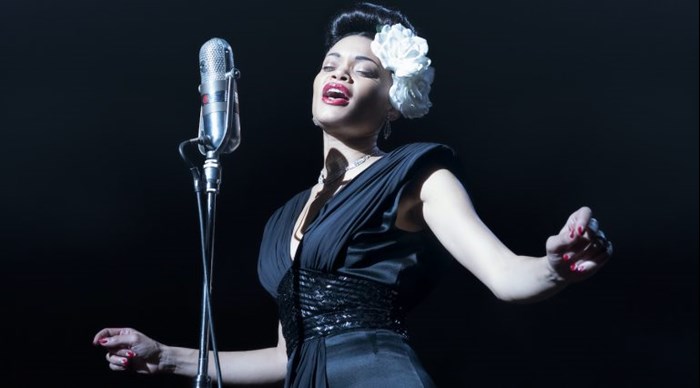 But that wasn’t the only retro flourish. They also “used a 16mm clockwork Bolex (which) will have a couple of flash frames when you pull the trigger and jump and start. So, when Billie is in some of her worst states of mind (we can) accentuate these immersions. We shot the 16mm mostly color; high-speed color, high contrast, (so it) feels like footage from way back.”

And sometimes they would even make the 35mm film “look like the 16mm Bolex stuff,” such as when Holiday is on tour in Europe, visiting cafes and boulevards with her current, and inevitably abusive, husband.

Talking from his home in England, Dunn described the film, and the whole experience, as “one of the ones you wait for to come along.”

Or, thinking of Holiday’s defiant observation to Anslinger when trapped in her hospital bed, that he’d already lost because his “grandchildren will be singing Strange Fruit,” perhaps it’s one of the ones that come back when the time is right. Like Holiday herself. If indeed, Lady Day has ever gone away at all.