Amy Duddleston, ACE press
Previous
MARE OF EASTTOWN Editor Amy Duddleston On Weaving A Mystery Into A Human Story: “Drama Came First And The Who-Done-It Was Second”
Next

For HBO’s Mare of Easttown, editor Amy Duddleston’s goal was to highlight a personal journey of growth while adding a mystery to enhance the show, but not define it. “We really discussed the fact that this show is really a family drama with a murder mystery thrown into it,” Duddleston says. “So, the family drama came first and the who-done-it was second.”

HBO’s limited series Mare of Easttown follows Mare Sheehan, played by Kate Winslet, as she investigates a recent murder in her town. While on the case, Mare must also try to keep her own life together, as she grieves the loss of her son and goes through a contentious battle for custody of her grandson.

While the murder mystery was a huge factor in the plot of the show, Duddleston’s priority was always Mare. “Mare’s journey with dealing with grief and family issues,” she says, “that was really the thing we focused on most. And then when it was time to hone the who-done-it, we tried to not give too many clues and pull back here and there, but that wasn’t our main concern.” 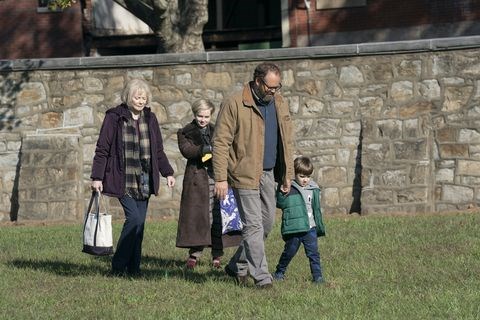 Although it wasn’t their main concern, keeping the intrigue and mystery surrounding the murder was still a difficult task that had to be dealt with. “It’s kind of tricky,” says Duddleston, “throwing you off. It’s staying with one thing and leading you to the next, and we did have to do a little bit of rearranging in a few episodes to kind of fool you a little bit more. And then we had big things to throw you off, like characters getting killed or introducing somebody that you really think might be the killer, but has absolutely nothing to do with it.”

Since the series takes place in a small town, where everybody knows each other, the focus on Mare’s journey expanded to the town itself. “This was about the people who lived in this town where this thing happened and their weird emotional journey,” says Duddleston. In a close-knit community, everyone in the town had an effect on the mystery and Mare’s life. “It added a lot to Mare’s personal drama,” she says, “with getting custody of her grandson and dealing with her son’s ex-girlfriend, the mother of her grandson. And it’s her ex-husband, it’s the priest, it’s this, it’s that, and there was a lot going on.”