Bridgerton is back on Netflix NFLX +1.2% for an exciting Season Two from March 25. From Shondaland and creator Chris Van Dusen, Season 1 of Bridgerton remains one of Netflix's most viewed TV series. Season 2 won't disappoint its fans. It is full of pent-up emotions, sexual tension, beautiful candy-colored frocks, opulent ballroom dances, and a "Mr Darcy-in-a-wet-shirt" moment. This is potentially the best season of the Bridgerton series.

Based on Julia Quinn's best-selling novel, The Viscount Who Loved Me, Season Two of Bridgerton focuses on the elder son of the Bridgerton family. Lord Anthony Bridgerton (Jonathan Bailey) is in search of a wife, but only the perfect woman will be able to suit the young man. No debutante in the Ton seems to meet Anthony's impossible standards, until Kate (Simone Ashley) and her younger sister Edwina Sharma (Charithra Chandran) arrive from India. The sisters are introduced into society and the Queen (a regal Golda Rosheuvel) by the great Lady Danbury (Adjoa Andoh). Kate wants only the best for her sister, so when she hears that the man who is courting Edwina is not looking for love in marriage, she tries to stop their union from happening.

If you love the enemies to lovers trope in romance, this is the season for you. The Viscount Who Loved Me is one of the fan favorite books out of the Bridgerton series. Although some of the more enthralling details of the novel are missing (rest assured the Pall Mall scene is still there), Season Two captures the growing chemistry and tension between Kate and Anthony very effectively. Regé-Jean Page's Duke may be missing in this second season, but there's a great new couple in the making. 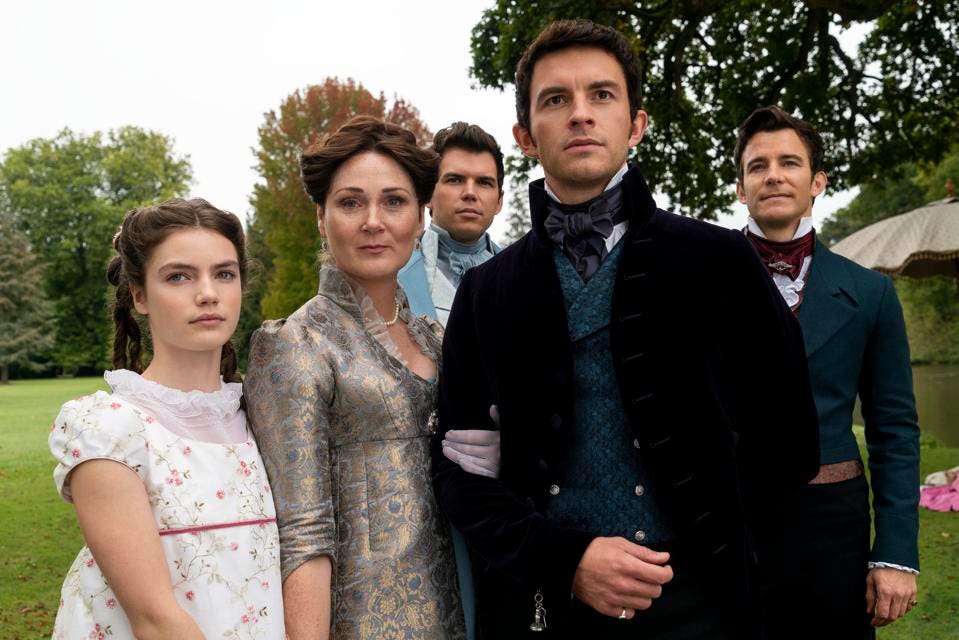 It is Anthony's turn to marry. Anthony was portrayed in Season One as lacking in tact when it came to helping his sister Daphne find the right husband for her, nearly forcing her into a disastrous match, and also as a rather callous character when it came to his treatment of his lover, opera singer Siena Rosso. By the end of Season One, the Viscount became one of the least likeable siblings of the Bridgerton bunch. Season Two's focus on Anthony would thus, on first impressions, appear to be a challenge. Anthony Bridgerton, in fact, continues to be an unlikeable character as Season Two begins.

The Viscount is as conceited as he was in Season One. Episode 1 sees Anthony searching for a wife, conducting his multiple meetings with young ladies of the Ton as if they were job interviews. It is clear that Anthony sees marriage as a means to fulfil his duty as head of the Bridgerton family, and nothing more. He soon sets his sight on Miss Edwina Sharma, even though he is well-aware that her sister, Kate, is dead-set against their union. Anthony continues to be a frustratingly arrogant character as he pursues Edwina, openly thwarting Kate's wishes, and rudely interrupting her as she speaks numerous times. But as the episodes unfold, Anthony softens up, becoming less uptight. The series slowly reveals the real reasoning behind Anthony's unwillingness to find love, and a game of Pall Mall changes everything. Season Two is particularly touching, as it reveals how Edmund Bridgerton died, and the devastating effects his death had on his grieving widow and Anthony, who was thrown into the responsibilities of becoming Viscount and head of the family at a young age. But, it is Kate's presence that really changes Anthony. 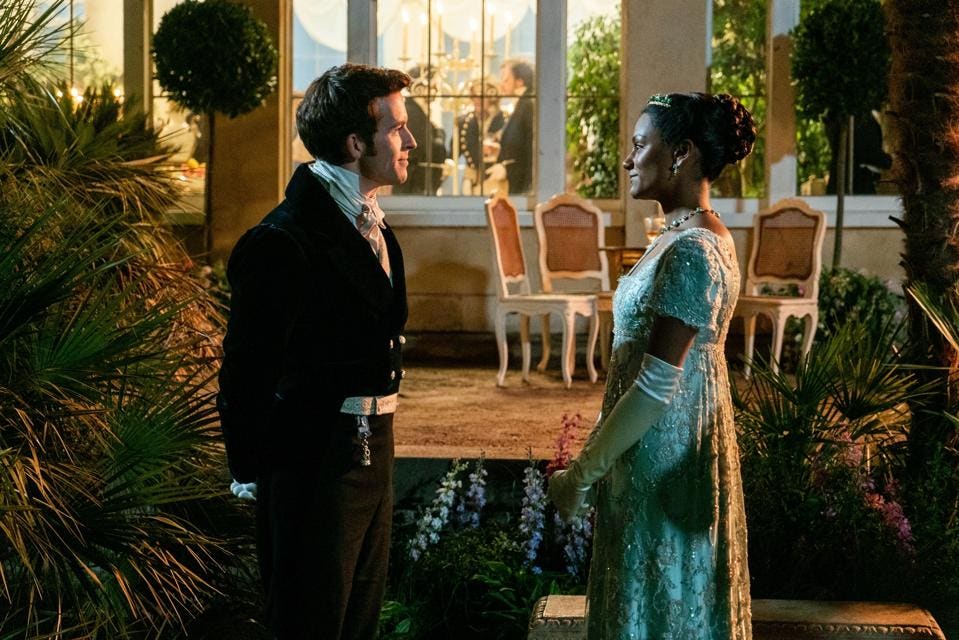 There is something so endearing about love-hate relationships. We seem to relish in such depictions of romance blossoming between two enemies, such as Lizzy Bennett and Mr. Darcy in Pride and Prejudice, or Benedict and Beatrice in Much Ado About Nothing. A particular dynamic installs itself between two characters that hate each other, which can so easily turn into passion, and, in romances, flourishes into the truest of loves. It is this gradual change into passion and love that is so captivating and amusing to watch, or read about. It is this kind of romance which Season Two of Bridgerton portrays, even if it is slow in coming to fruition. The series achieve the seemingly impossible feat of turning an unlikeable character into an appealing romantic lead.

The moments between Anthony and Kate are a delightful, as each deny the attraction they feel for each other by being hostile to one another. There are some great banter and pining looks exchanged between the two characters once the intrigue gets going. Jonathan Bailey and Simone Ashley form a great pair, capturing the tense chemistry between the two characters. Through Bailey's performance, there is a great sense that Anthony's trauma prevents him from accepting the feelings he has for Kate, while at the same time, he clearly can't help softening up his anxiety-ridden stubbornness around her. Ashley's Kate is just as stubborn and has the upright demeanor of a determined young woman, who thinks of her sister's happiness before her own. 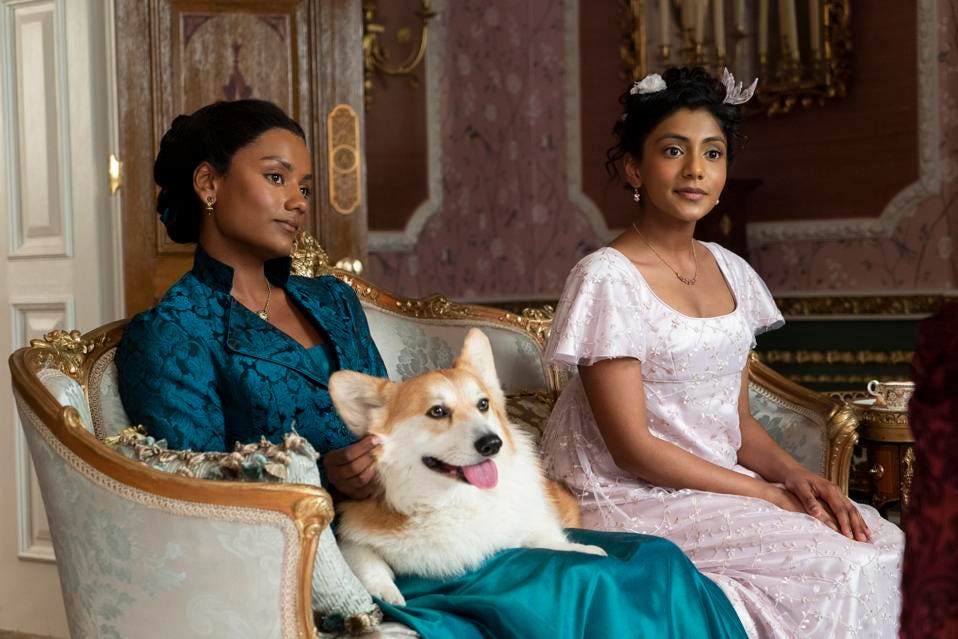 While this season plays with the enemies-to-lovers trope of romances, it is also about the close relationship between two sisters. The scenes between Simone Ashley and Charithra Chandran are most endearing. Kate is a doting sister, wanting nothing but the best for her little sister Edwina. Due to Mary Sharma's grief for her husband, Kate has essentially raised her little sister, as Kate so proudly tells Lady Danbury of the many lessons she's taught her sister. Edwina, in turn, searches for her sister's approval at every decision she must make. The way Chandran looks at Ashley, as she constantly turns her head to her, shows the devotion the sisters have for one another. As the season unfolds, Edwina finds a way to emancipate herself from her older sister's opinions, just as Kate will learn to want things for herself.

Once the love triangle and the enemies to lovers trope gets going, this new season of Bridgerton is captivating, despite some odd directing choices at times. This is particularly apparent in moments of heightened emotion. The scene between Anthony, Kate and the bee, for example, feels particularly awkward. The direction and editing of that scene feels clumsy, but in so doing it accentuates the awkwardness of the whole situation.

Although some of the secondary storylines in this season are a little less engaging, namely the whole Featherington household storyline, Bridgerton continues to be a greatly entertaining series. Season One was a raging success. I would not be surprised if Season Two does even better.