“In the world of Veep, she was the first woman vice president and she was the first woman president; there were no fashion rules we had to follow since none existed,” says Kathleen Felix-Hager, Veep’s costume designer since season three. For fans who have watched Selina Meyer, played by Julia Louis-Dreyfus, evolve (or not) throughout the show’s seven seasons, her look is well established: cherry red sheath dress, mind-bogglingly high heels, or a printed blouse and pencil skirt so tight, you wonder how in the world she’ll sit down.

Veep, of course, is a satire of American politics, but Meyer’s wardrobe is far from being a parody of real Washington style. “I didn’t want to put her in the traditional ‘politician suit,’” Felix-Hager says. “The dress became the new suit, so to speak, for us.” In describing the origins of Meyer’s look, Felix-Hager name-checks Michelle Obama’s love of color—in the first scene of every season, Meyer wears bright red, as she will in the closing scene of the series. Felix-Hager goes on to explain that the sexy, almost sultry style of America’s fictionalized first female leader is a blend of feminine power and funniness. Louis-Dreyfus not only comports herself differently in her cinched sheaths, but also uses the form-hugging and bodacious silhouette as the basis of her physical comedy. “Sometimes I would say, ‘Well, you can’t do that particular thing in this dress because it’s so tight,’ and Julia’s response would be, ‘But that’s what makes it funny,’” the costume designer says. “She would have to fight against the clothes, but she loved that.” 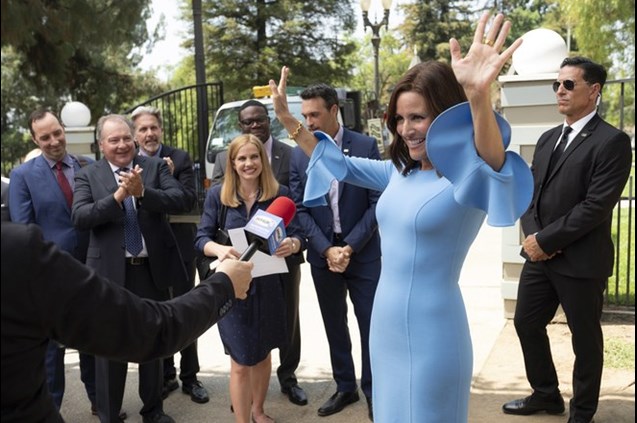 The final season of Veep has the interesting circumstance of airing while six women vie to become the Democratic candidate for president. And not one of them would be caught dead in a Meyer-esque sheath or stiletto. Felix-Hager says she hasn’t seen much real-world runoff from Veep—politicians are still far from embracing the more traditionally feminine aspects of style—but she hopes that Meyer’s aesthetic could inspire a new look in Washington. “Walking through the world [as] female, people feel freer to comment on your clothing and your appearance. I actually think that women politicians should not be afraid of that. You can have a sense of style and really love fashion, but you can still be an amazingly smart, hardworking woman that’s fighting the good fight. Those two things can exist in the same person,” she says.

The best—and hopefully only—lesson Washington could take from Meyer is that the feminine is powerful, that a sleek dress doesn’t diminish a woman’s smarts or status. “She is unapologetically female and woman, and we decided to just lean into that and to celebrate that,” Felix-Hager says of the character. “You can be a powerful woman, still be sexy, still be beautiful—and that also is a power that you have that men don’t have. So why not use all the tools in the toolbox?”

Getting to a place where a female politician isn’t expected to wear a pantsuit will not be without its challenges, but maybe it’s not that far off. Representative Alexandria Ocasio-Cortez uses her personal style to broadcast a political message. She has spoken about the importance of her red lipstick (Stila’s Beso shade), hoop earrings, and occasional braid, tweeting about her swearing-in look, “Lip+hoops were inspired by Sonia Sotomayor, who was advised to wear neutral-colored nail polish to her confirmation hearings to avoid scrutiny. She kept her red. Next time someone tells Bronx girls to take off their hoops, they can just say they’re dressing like a congresswoman.” Let’s see if other female politicians get the memo. Until then, we’ll just have to revel in the outrageously fun fashions of our favorite TV pres.