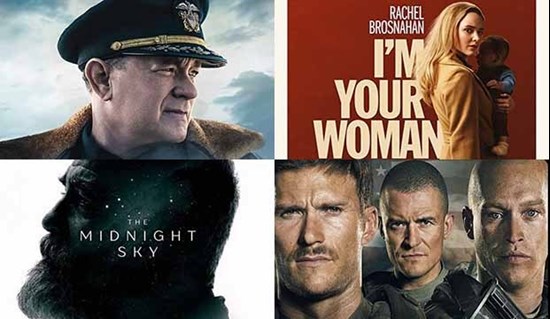 Four top film cinematographers will reveal the secrets behind their crafts when they join Gold Derby’s special “Meet the BTL Experts” Q&A event with key 2021 Oscar contenders this month. Each person will participate in two video discussions to be published on Wednesday, December 2, at 5:00 p.m. PT; 8:00 p.m. ET. We’ll have a one-on-one with our executive editor Paul Sheehan and a group chat with Paul and all of the DPs together.

RSVP today to this specific event by clicking here to book your reservation. Or click here to RSVP for our entire ongoing panel series. We’ll send you a reminder a few minutes before the start of the show.

This “Meet the BTL Experts” panel welcomes the following 2021 guild and Oscar contenders:

Synopsis: Several months after the U.S. entry into World War II, an inexperienced U.S. Navy commander must lead an Allied convoy being stalked by a German submarine wolf pack.

Johnson’s career has included such projects as “Bill and Ted Face the Music,” “The Expendables 2,” “Captain America: The First Avenger,” “The Wolfman” and “Jurassic Park III.”

Synopsis: In this 1970s set crime drama, a woman is forced to go on the run after her husband betrays his partners, sending her and her baby on a dangerous journey.

Synopsis: This post-apocalyptic tale follows Augustine, a lonely scientist in the Arctic, as he races to stop Sully and her fellow astronauts from returning home to a mysterious global catastrophe.

Ruhe’s career has included such projects as “Catch-22,” “Counterpart,” “American Pastoral,” “Page Eight” and “The American.”

Synopsis: A small team of U.S. soldiers battle against hundreds of Taliban fighters in Afghanistan.

Senatore’s career has included such projects as “Wonder Woman,” “Beauty and the Beast,” “Spectre,” “Olympus Has Fallen” and “300: Rise of an Empire.”