"Do you understand what Everett is capable of?" Strand Releasing has unveiled an official US trailer for an indie drama titled The Evening Hour, made by filmmaker Braden King, adapted from Carter Sickels' acclaimed novel. This premiered at the 2020 Sundance Film Festival last year, and it arrives in select US theaters this July. Set in "the autumnal mountains of southern Appalachia," a nursing home aide becomes a small-time drug dealer, reselling his patients' excess painkillers to local addicts to help make ends meet. Starring Philip Ettinger (from First Reformed), with Stacy Martin, Cosmo Jarvis, Michael Trotter, Kerry Bishé, and Lili Taylor. Directed by Braden King, and set to an original score by Michael Krassner, Tim Rutili and Boxhead Ensemble, The Evening Hour presents "an authentic portrait of a rural American landscape in transition - and a moving, lyrical hymn for the complex tangle of hardship and hope wrought by opioid addiction in Appalachia." If this kind of small town story interests you, then this is worth a look.

Here's the official US trailer (+ poster) for Braden King's The Evening Hour, direct from YouTube: 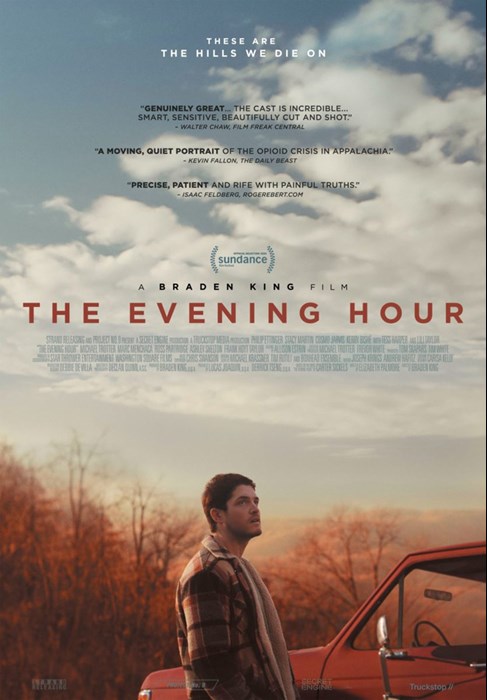 The autumnal mountains of southern Appalachia hold a haunting power within which Cole Freeman (Philip Ettinger), maintains an uneasy equilibrium, looking after the old and infirm in the community while selling their excess painkillers to local addicts to help make ends meet. But when an old friend, Terry Rose (Cosmo Jarvis), returns with dangerous new plans that threaten the fragile balance Cole has crafted amidst the addiction, economic stress and environmental devastation that have his declining mining town in a stranglehold, his world and identity are thrown into deep disarray.

The Evening Hour is directed by American filmmaker / artist Braden King, his second feature after directing Here previously, plus a few docs including The Film That Buys the Cinema. The screenplay is written by Elizabeth Palmore, adapted from the novel by Carter Sickels. This initially premiered at the 2020 Sundance Film Festival last year. Strand Releasing will debut The Evening Hour in select US theaters starting July 30th, 2021 this summer.