‘As They Made Us’ Review: Dianna Agron’s Graceful Performance Grounds Mayim Bialik’s Debut

Despite its minor aftertaste, Bialik’s first feature engages with a sure-handed rhythm and veterans Dustin Hoffman and Candice Bergen in key parts. 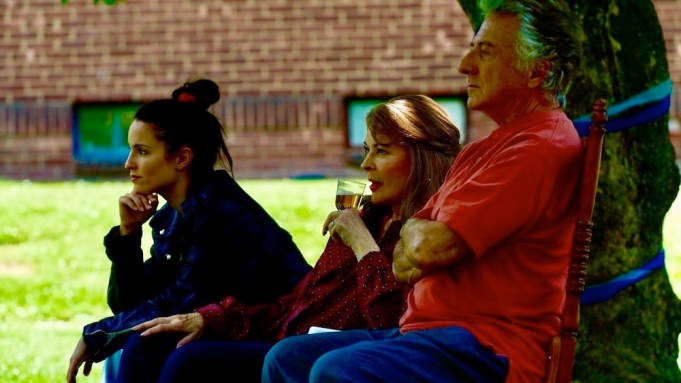 Pretty much every family has a reliably dutiful mitigator: They are the sacrificing person to whom siblings vent when familial affairs turn sour and parents call for on-demand assistance. Among the Frays — the family at the heart of Mayim Bialik’s soberly affecting if not a touch monotonous domestic drama “As They Made Us” — the honors belong to the selfless Abigail, portrayed by an elegantly low-key Dianna Agron (“Shiva Baby,” “Glee”).

Indeed, the frantic single mother of two hyper boys and columnist for The Modern Jew drops everything and runs to help out whenever there is yet another friction at her folks’ house. She is a certified saint and Bialik’s respectable directorial debut — loosely inspired by the former “Big Bang Theory” actress and current “Jeopardy” host’s own familial past — quickly builds a strong case for her virtuousness. We learn that even as a child stuck with a perennially quarreling mom and dad, Abigail had a way to ease tensions and tend to the emotional needs of her brother Nathan (played by Bialik’s “Big Bang Theory” co-star Simon Helberg in adulthood). An early flashback shows us as much: Grown-ups have a deafening fight in the family car, while the kids in the backseat treat it as mere background noise and engage in a serene conversation, shepherded by the calm and collected Abigail. If only the people that surround her could deserve her genuine devotion, a trait that Agron sells convincingly in her understated performance, steering clear of clichéd sentimental outbursts.

Casting a pair of veterans as the Fray parents with abusive tendencies infuses Bialik’s small outing with immediate high-profile credibility. In a slightly over-baked performance that leans too heavily on comedy at times, Candice Bergen plays Barbara, the manipulative and often insultingly rude matriarch, someone who can’t even bother to learn the names of people that assist her, while she remains in denial about her husband’s flailing health. Subtler and more polished than Bergen, Dustin Hoffman plays Eugene, the ailing dad with a degenerative condition, who falls and injures himself frequently and routinely goes through domestic helpers that don’t seem to last at the demanding job.

Because Nathan, now a respected scholar, has been estranged from the family by choice for years, Abigail dedicates herself to cleaning up the mess whenever duty calls, without any boundaries. Apart from her journalism gig (which we never see her actually performing), the only refuge she seems to have is her charming landscaper, Jay (Justin Chu Cary). In due course, he becomes a supportive romantic interest for Abigail, enlivening the yarn with a rather welcome contrast to her rigid ex-husband and all the other suffocating people that occupy her life.

It’s anyone’s guess how a lowly columnist could afford a landscaper or her seemingly comfortable lifestyle in general. But while Bialik falls short of representing Abigail’s livelihood plausibly, she succeeds in being keenly attuned to her everyday dilemmas and restorative routines, among them is a loving embrace of faith and the passing of her Jewish traditions to her kids in some of the film’s most open-handed moments of grace.

Elsewhere, Bialik proves to have an organic handle on the delicate rhythms of storytelling, unraveling the Fray siblings’ respective tales via well-paced flashbacks that flow smoothly throughout “As They Made Us,” photographed by David Feeney-Mosier’s soft, unassuming lens. Through a few of these stylishly braided memories, we get the backstory on Nathan’s separation. The reason, truth be told, doesn’t make much sense: Are we to believe that a seemingly liberal family would be disapproving of his living with his girlfriend before marriage? Nevertheless, Bialik manages to tap into believable emotions once Nathan makes a brief return to the family, after Eugene’s condition irreversibly worsens.

Compared to the masterful “The Father” and similarly themed “The Glass Castle” — both about the entanglement of love, shame and resentment when it comes to parental relations — “As They Made Us” leaves a minor, even inconsequential impression. But despite an eager-to-please ending that tries too hard to redeem the elderly Frays, Bialik’s movie still offers up hope, humor and above all, keen observations on grief in the wake of those who’ve damaged us in ways both tangible and veiled. That’s no small reward for an effort of such modest ambitions.