Headlines
Previous
"Is this Gen Z's 'Heathers'?": Netflix's "Do Revenge" Drops Trailer with Costume Design by Alana Morshead
Next

Is Netflix’s upcoming dark teen comedy Do Revenge Gen Z’s answer to Heathers and Mean Girls ...or is the trailer just an expertly cut-together melange of signifiers some algorithm decided would send neurons to our brain’s pleasure centers? Either way, the trailer, which just dropped today, certainly gives a whole lot to talk about. The fact that the cast includes Maya Hawke, Camila Mendes, Sophie Turner, Austin Abrams, Alisha Boe, and Talia Ryder is only the start.

The setting for Do Revenge is a fancy Miami private school where the uniforms, appropriately, come in a palette of pastels. Mendes’s character appears to be Queen Bee of the school, with the most popular boy on her arm. (That is, until he apparently leaks something intimate to the entire class.) Hawke, meanwhile, plays the not-particularly-gender-confirming new kid who’s been canceled after a girl claimed she forcibly kissed her. Naturally, the pair cross paths and decide to team up to carry out revenge on those who have wronged them. It involves a classic teen comedy makeover scene, evisceration of male privilege, and a brief scene of a screaming Sophie Turner all set in sunset hues and fashions fit for rich girls with first pick at a South Beach consignment shop. 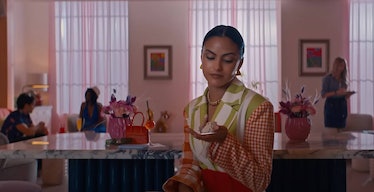 The plot is a bit of reworked vintage as well. It’s inspired by Alfred Hitchcock’s classic Strangers on a Train—that’s the one in which Farley Granger and Robert Walker meet on a train and decide to exchange murders with the idea it would make it harder for either to be caught. The film itself was based on a Patricia Highsmith story (can you imagine a sudden trend of teenage remakes of Highsmith novels? Who doens’t want high school-set Carol or teenage Talented Mr. Ripley?).

The film is the latest from Jennifer Kaytin Robinson with Costume Design by Alana Morshead. Robinson is best known as the creator of MTV’s beloved but swiftly canceled Sweet/Vicious, and recently co-wrote Thor: Love & Thunder and directed the previous Netflix original Someone Great. Do Revenge is set to debut September 16th, at which point we’ll know whether our excitement was warranted.