Headlines
Previous
The Boys' A-Train Has His Own Music Video Now, Shot By Peter Mosiman
Next

The Boys creator Eric Kripke is keenly aware that fans have been waiting for the hero-gasmic Season 3 for a while now, and that we're all desperate to see and hear new shit, no matter what form it may come in. It's presumably a big reason why the Vaught News Network videos were created, and it's also presumably part of what influenced the creation of the so flashy, so dashy music video seen above, featuring Jessie T. Usher's A-Train rolling the top back on his rap career with the Season 2 track "Faster."

The existence of the music video itself isn't necessarily a surprise, considering the Emmy-nominated The Boys already blessed the world with an expanded visual cut of Starlight's "Never Truly Vanish," which she sang in Season 2 for Translucent's funeral. And I guess it's no surprise that A-Train's "Faster" slaps as hard as it does for a song that's basically a parody whose lyrics are loaded down with lines about being fast. Sure, "Never Truly Vanish" has really lush production and technically sounds good, but its satirical origins are smeared all over it. "Faster," meanwhile, sounds like something people would listen to on the radio in The Boys without having to suspend much disbelief.

Being fast is A-Train's schtick, so of course that's what the song and video are going to focus on. Though I am definitely interested to hear what the B-sides would be from his first album, just to see if he dipped into any truly emotional lyrical territory once all the zippity-doo-dah inspirations were dried up. I would 100% love to hear a Hughie diss track, also.

In any case, let's all thank the high heavens that music producer (and The Boys composer) Christopher Lennertz didn't create the kind of stereotypical rap parody that tends to make me want to dunk my head in motor oil just to stop the noise. And while the music video for faster does dip more into typical rap video territory, there's not really a whole lot going on that stands out. Though I do enjoy when A-Train pushes his goggles up for some reason. Superheroes are people, too.

Plus, the "Faster" music video also gives Aimée Proal a chance to step in and shine for the hook. We can only hope to see more of the pairing in Season 3. Assuming it gets here...ever. 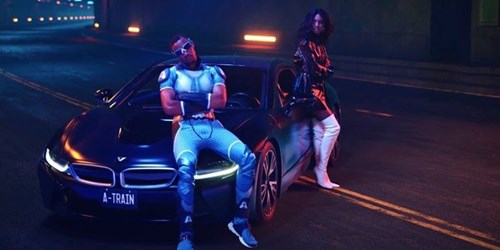 The Boys Season 3 will debut at some point in early 2022, so keep an eye out for premiere dates, and for when the best start time will be to begin clamoring for Jensen Ackles' Soldier Boy to get a music video, presumably parodying Lee Greenwood's "God Bless the U.S.A." Stay tuned to all the shows coming much sooner than The Boys (no pun intended) with our 2021 Fall TV schedule.