Creator/Exec Producer Justin Simien: The cinema I grew up with didn’t have black people in it, and with very few exceptions. I mean Spike and Ernest Dickerson in particular with “Do The Right Thing” brought a lot of the French New Wave, brought stuff from silent movies, just brought to bare a lot of cinematic techniques that before them no person of color would ever find themself in. You have to go to Oscar Micheaux before you can see anything that looks like cinema with black people in it, or that’s about central black characters… [Part of the look of ‘Dear White People’] is just wanting to see to see black faces and faces of color in these kinds of frames is part of it for me.

It’s a pastiche of all kinds of influences, whether it’s classical music, jazz music, hip hop music, we sometimes will be quoting movies. We quote a lot of “Persona,” we’ve quoted “Barry Lyndon,” I quoted some De Palma in the first season, all of it is meant to say – all of these cultural cues that we as a society have collectively decided is for white people, it’s actually for everybody and everybody should have the opportunity to be part of this post-modern cultural moment. Just because it’s a black character it doesn’t have to be gritty or shaky or darkly lit.”

Cinematographer Topher Osborn: Framing wise, a few broad examples [of influences] are Kubrick, Tom Hooper and Bergman. I think the show leans towards symmetry, loves a good wide angle lens and can’t resist the temptation of a slow zoom. But there are so many more. Justin comes with an iPad full of images for every scene and we would often look at new things in the morning he had never showed me. He keeps us on our toes and is always looking for new inspirations. I’m a fan of this. 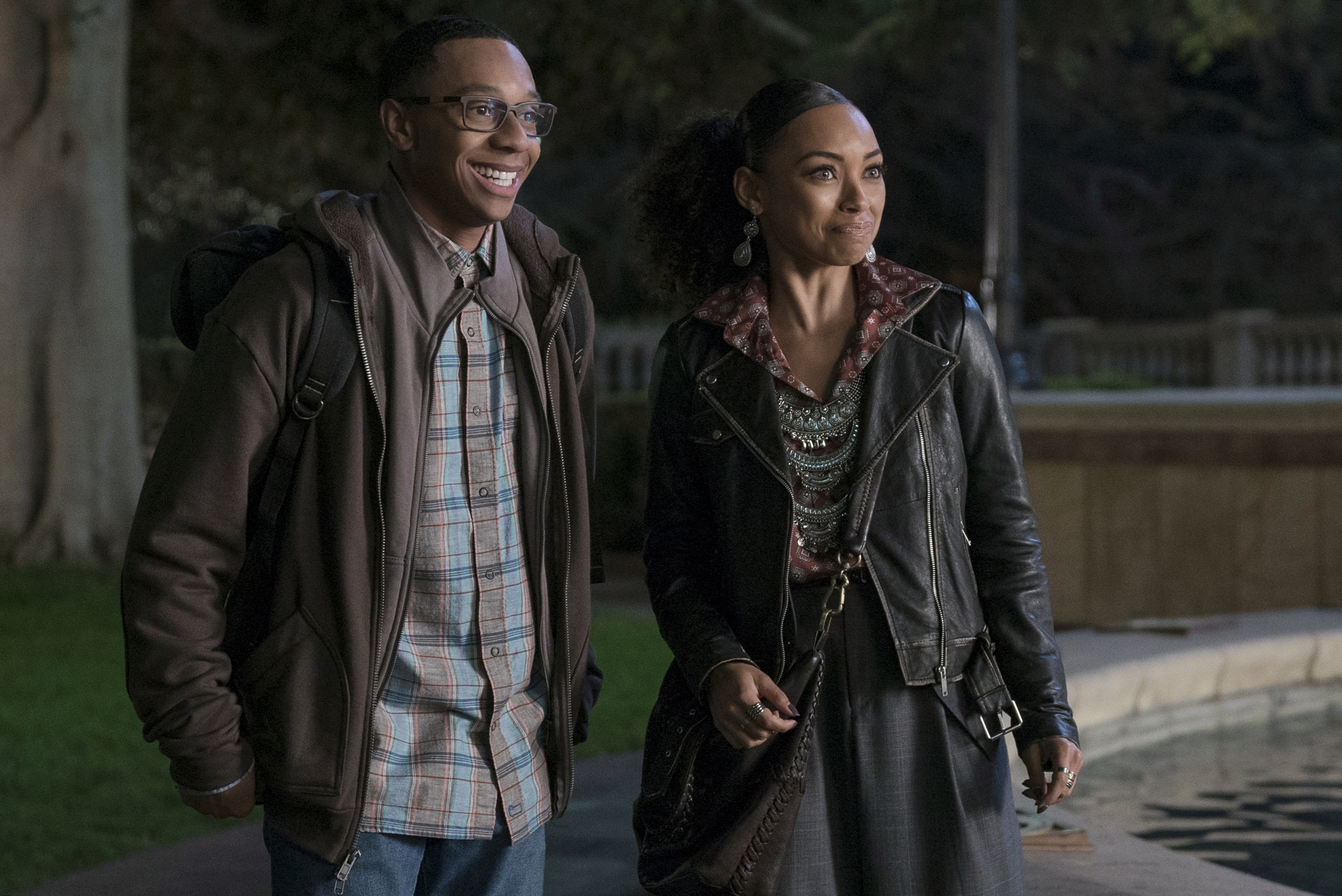 Osborn: A lot of [the show’s visual style] happens naturally from character to character and director to director. You can feel the tonal / POV shift in the script and also the shift in the sensibilities of each director. So if Justin Simien was directing, we would obviously brainstorm on how to achieve this, but when it was a guest director, then there’s a whole new vision in the mix and that new vision had an organic way of supporting these shifts.

Simien: We have a pretty extensive style guide and color story, but it’s really designed to be a starting point for the directors, not a prison… I think what makes the show fun and rich is that episodes feel different from each other and they feel singular. I think everything that we do we try to make it feel singular, that’s what actually unites all the episodes together. I shot episode 6 like a film noir piece. Steve Tsuchida shot episode 7, which is the episode where Troy (Brandon P Bell) trips on mushrooms, like “Hair,” or something. It’s fun to get to learn from these people and get to learn how they work on sets and get to see them on a TV show and take the TV shackles off and say, ‘You get to make a little movie this week and it’s yours. I’ll let you know if there’s a parameter I don’t like, or I don’t feel like it’s part of this world, but by and large do what I wouldn’t do, please.’

Osborn: One example is how we would approach framing each character dependent on their current state. With Sam (Logan Browning) in episode one, we would look for opportunities to frame her using limited space and often shooting into flat backgrounds as a way to suggest the current confinement of her character. It was a lot of fun but also it can be a challenging – in a good way – at times when you want to keep within visual parameters you’re after even if the particular set you’re shooting doesn’t immediately lend itself to those parameters.

Another example is episode 6, Lionels’ episode. From the get go, Justin wanted to make this a noir / mystery episode and a lot of the visual references we looked at were as such. So we had fun with it. We leaned into more stylized lighting, went darker when we could and also had a lot of fun playing with some wider lenses in order to distort certain moments. 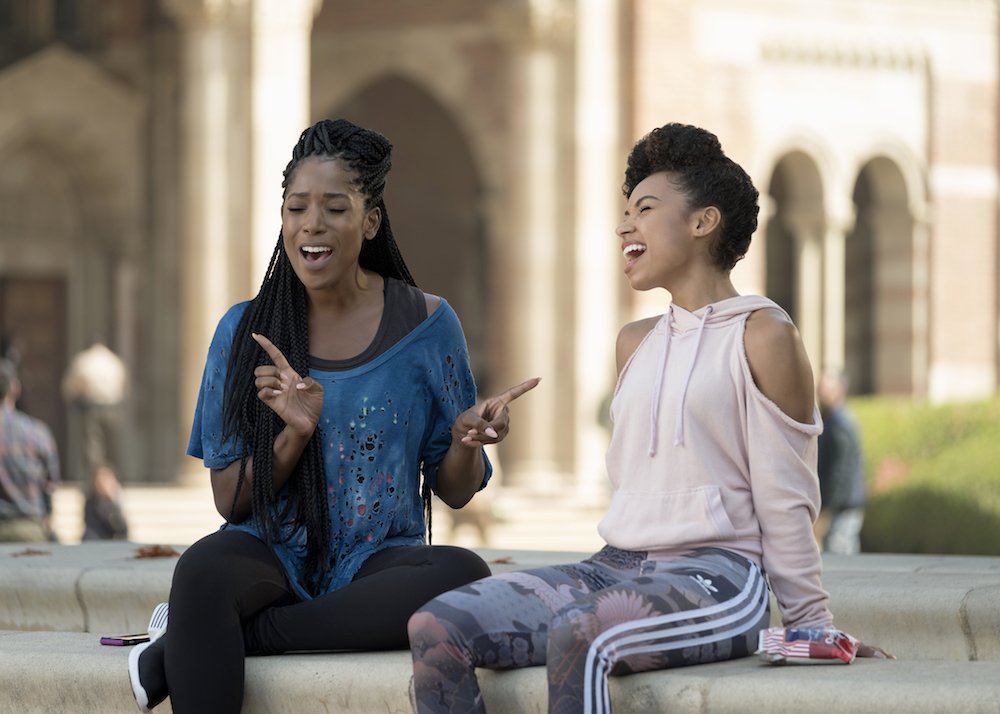 Osborn: Our exterior days are typically one day of our five day week. And that’s our one location day of the episode which means it’s usually a 10-page day. So we would have to light them as quickly and economically as possible while looking for ways to build in our style as much as we can.

UCLA has some nice practicals which we made use of when we could. The scene near the end of episode 3 where Silvio and Lionel are talking outside of the brick library arches, all we did for the wide shot was float a tungsten balloon light overhead talent to create some toppy ambience, and the practicals hanging In the archways did the rest. We added a book light on the close ups, but the wide shot was just a single light. This was one of our bigger days and our very first night exterior shoot, so it was planned to be a very long OT day. We ended up wrapping early and everyone was thrilled. 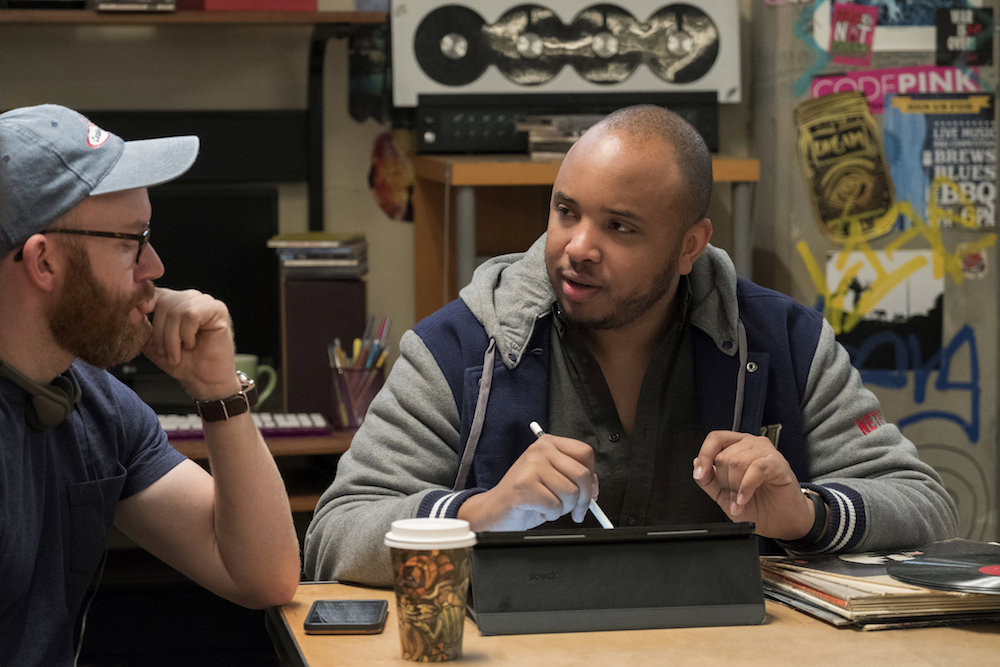 We decided to live in the T 2.8 – 4 ball park to be slightly more classical in the look. Season 1 shot mostly wide open on masters primes (1.3). [Cinematographer] Jeff Waldron did a beautiful job on season 1 and I must say, I was very nervous about filling those shoes. In early discussions, Justin and I decided to go a little deeper on focus for season 2 to be in line with a lot of the vintage references we were looking at.

So I swapped to T1.9 zeiss ultra primes since we didn’t need the T1.3 of the master primes.I really love the look and contrast of Ultras and think they take the curse off the super sharp Red Weapon sensor. I noticed this while watching “Narcos.” That show feels very natural and the ultras bring a gentle quality to the image. I’m also a big fan of lots of wide and medium focal lengths, like 20, 24, 28, 32, 40, 50, 65. Lots of subtlety to your options, so ultras hit that mark for me, as do masters, in a way not all older prime sets do.

The other reason for ultra primes is we planned on a lot of zoom moves for season 2. The Alura 18-80 mixes very well with ultras, and I like being able to swap back and forth without worrying about a different feel as you go from primes to zooms.

The color grade itself is pretty aggressive. We also add a bit of post grain which I love. [Because] we switched our lenses to go a little softer optically and then added some pro mist in post. I hadn’t done this before but our colorist and I played around during the camera test and I loved the results. Slightly more forgiving on the face while keeping the eyes sharp.