When cinematographer Scott Peck first learned that Stargirl was going to become a series on the DC Universe streaming service, he started doing a lot of research about the DC Comics character STARGIRL and its creator Geoff Johns. That led him to the Cooke Optics’ Anamorphic/i standard and Anamorphic/i SF (Special Flair) lenses.

“To me, the look was always this idea of the past meeting the present,” said Peck. “The Cooke Anamorphic/i standard primes combined with the Cooke Anamorphic/i SF versions were a part of that from the start. Inspired by the original Justice Society of America (J.S.A.) comics where they mix older comic characters with new comic characters, I saw the show as having a slight retro vibe combined with modern day flair. That’s why I wanted to use both the standard and special flair lenses.”

The Cooke Anamorphic/i SF prime lenses are specially manufactured with a coating that allows for even more creative options. They are called “Special Flair” because they allow filmmakers to kick the flares, bokeh and other aberrations into new visual territory.

Known for lensing the CW Network’s series Black Lightning, AMC’s Fear the Walking Dead and the Sony/WGN AMERICA series Outsiders, Peck’s research paid off, having recently finished shooting six episodes of Stargirl, which is set to premiere on the OTT service in 2020.

Stargirl follows high school sophomore Courtney Whitmore (Brec Bassinger), a teenage girl originally from California who just moved to Nebraska with her recently remarried mom, Barbara (Amy Smart), who discovers that her stepfather, Pat (Luke Wilson), has a secret past — he used to be the sidekick to a super hero named Starman (Joel McHale), a member of the legendary J.S.A. After Courtney stumbles upon her stepdad’s secret stash of old super hero equipment, she is drawn to Starman’s staff and takes on his legacy to become the crime fighter Stargirl. With Pat’s help, Courtney inspires an unlikely group of young heroes to stop the villains of the past and rebuild the J.S.A. 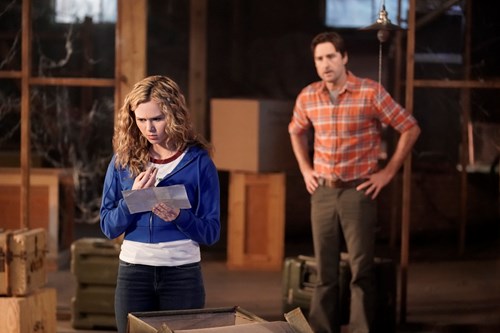 After several discussions with series pilot DP Chris Manley ASC and fellow alternating DP Michael Karasick, it was agreed that Sony VENICE cameras with two sets of Cooke Anamorphic/i prime lenses — “would give us the beautiful consistent look and versatility we needed to deliver the show under very demanding conditions,” according to Peck. “Stargirl is very ambitious; given the production scale, delivery requirements, stunts and special effects, we knew we would have two full units often shooting simultaneously.”

“What I love about Cooke glass is that you can always count on its beauty and its consistency,” said Peck. “Michael Karasick and I carried two sets of Cooke Anamorphic/i primes: one set of standard lenses and one set of Special Flairs. The two sets cut flawlessly from scene-to-scene and episode-to-episode, with the 25, 40 and 65 MACRO being our most commonly used lenses.”

Like other super hero movies and television shows, Stargirl is filled with a world of interesting and challenging lighting scenarios.

“All of our lighting work is done with hybrid and full colour LED units to achieve a more unique comic book colour palette,” explained Peck. “This gives us the ability to subtly change the colours we use for varying skin tones and environments. Being able to utilise all of our LED lighting tools has given us the flexibility to not only have every gel in the book, but also create flicker and other lighting effects that just aren’t possible without the use of LEDs.”

“When it comes to Cooke lenses, I’m very familiar with the look I’m going to get and that’s really important,” said Peck. “I’m a huge fan of the Cooke S4/i spherical lenses and have used them on several projects. In today’s marketplace, cinematographers have a plethora of options when it comes to choosing cinema optics. I love Cooke lenses because they exhibit beautiful warm skin tones, smooth contrast and just the right amount of sharpness.

“Stargirl is a great adventure story that has that sense of wonder I remember from watching movies as a kid, like The Goonies, Back to the Future and The Karate Kid,” said Peck. “We set out to create a superhero television show that is lighter in tone and appeals to the entire family, while offering a cinematic experience from episode to episode. Cooke lenses were the right lenses for Stargirl because of their beauty, consistency and reliability.”