When a series is as storied and beloved as Star Trek, certain aspects of the show, like the uniforms and costumes, become iconic and rarely change. However, the new season of Star Trek: Discovery takes place over 900 years after the original series, which let costume designer Gersha Phillips do some interesting updates to the costumes. “I came up with this cleaner, sleeker version of how we wanted to construct things,” Phillips says.

After jumping through a wormhole in the finale of season two, season three starts with the crew of the USS Discovery having jumped 930 years in the future. Updated time means updated clothing, but the really interesting costumes came in the middle of the season, with a return to the Terran universe.

“We did more 3d printing and 3d modeling,” says Phillips, “So our chest plate was done with 3d modeling and then we would print them and mold them here in-house, and we were chroming as well. All of those layers we got to play with and that made it more elevated and sharper, and a much more realized costume.” 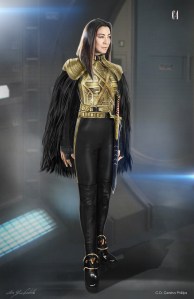 For the reintroduction of Emperor Phillipa Georgiou (Michelle Yeoh), Phillips made a few new looks, including one she dubbed “Georgiou Casual.”  This costume involved the normal Terran breastplate, but with a fur cape draped over her uniform. “The cape is like her daywear,” she says. “We thought that’d be a cool option to give her something over her breastplate, because we didn’t want the plate by itself. That’s what everybody else does, so Georgiou needed something extra special.”

The other special thing needed for an Emperor is their crown. “When I was looking at references for jewelry for Georgiou as Terran Emperor,” Phillips says, “I looked at a lot of Asian and Japanese influences and was pulling different ideas together. It’s something that’s similar to a crown, because she’s an emperor, but also something that elevated the look a bit more.”

In addition to the Terran uniforms and Georgiou’s outfits, Phillips was also tasked with creating the outfits for the aerial silk dancers. While the dancers wore outfits that looked like the Terran uniforms, Phillips says they needed to be more “costume-like” than the actual uniforms. “When you think of silk dancers, you think they’re going to be using silk,” she says. “They actually use a nylon fabric that shreds other fabric.” Her solution was to make fitted bodysuits with texture prints, but using an older version of the process. “So it wouldn’t grab the ropes,” Phillips says, “It had to have a certain sort of slip for their costumes to slide through the rope.”