Costume designer Gersha Phillips has been designing the look of “Star Trek: Discovery” for three seasons. Laser cutting, bonding and 3D printing are the “futuristic” tools she has been using to craft the costumes of the series, hoping the costumes look “modern” for the 32nd Century using 2020 technology,” she explains.

The third season has seen Michelle Yeoh’s Emperor Georgiou affected by the time-jump: something is off about her demeanor and her condition is worsening. In a two-part episode, Georgiou enters a mirror universe hoping to understand what is happening to her.

Below, Phillips breaks down creating the looks for the mirror universe and how technology has helped her process over the seasons. 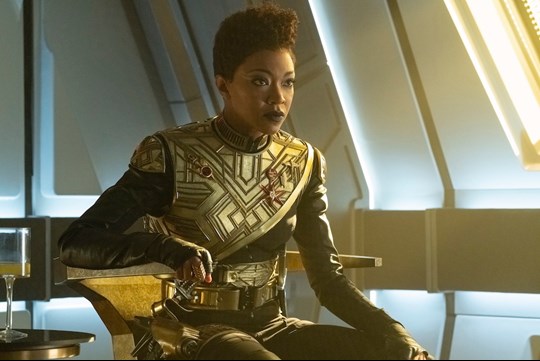 On Knowing About Storylines in Advance

“We had an overview meeting last Summer and we have those every year now where they give us a pitch for the season. We knew about the mirror universe because last year.  We knew we were going to jump into the future because of Michelle Yeoh, and how she was getting out of our world and into the ‘Section 31’ world which is the next series, so it was an early conversation,” Phillips tells Variety.

“I wanted to do a better job this time in terms of how we made everything, especially with the breastplates and overlays. We 3D printed everything. It started in graphics and was turned into a 3D model which then goes into the printer. Once we get the print, we make our molds and we chrome them.

“After that, we apply them to the breastplates. This time, you can see they had a much better look and finish to them, and they’re sleek. Before, we used to mold them and cover them in leather. If you look at them side by side, you’ll be able to see the difference.

“We did a lot of the costumes using bonding. It’s the most important thing we do in terms of how we make our uniforms. It means we use a glue adhesive that sticks material together, rather than sewing. If you look at Nike or Lululemon, you’ll see they use that and I thought about the future and how things would be manufactured. Moving into the 32nd century, the idea is things are sleeker and you don’t see the sewing techniques.

“I used a lot of laser cutting especially on the collars of the uniforms because it helps get you closer to the body. It makes everything sleeker and creates that silhouette where the clothes feel as if they are sitting on the body. You can’t see the stitching and the construction.” 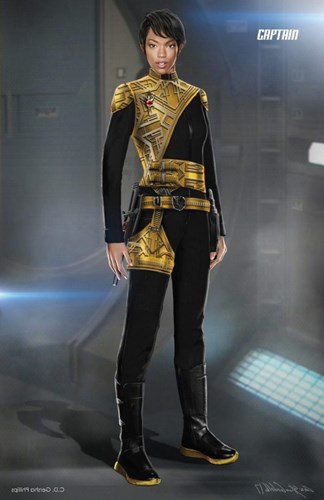 “It’s supposed to be an alternative version of what took place the last time we were there the last time — the team said it was a few days before,” Phillips explains. “The idea was the Emperor was in her prime. I called it the 2.0 version because this time we wanted to do it better. Last time, on our first pass there, we didn’t have the time or budget. I talked about wanting to elevate everything.

“In the play sequence, the characters are on these silk bands that aerialists use, and that turned out to be a learning curve I had never worked with that medium and learned that there were parameters that I had to work within: You couldn’t have anything dangling [and] the material had to be a certain fabric because anything else would get shredded. I thought it was silk, but it’s this nylon-mesh material that is abrasive and that was why it would rip through everything.

“We double-layered the dancer costumes, and because we printed on our fabric for the Georgiou character, it helped her on the silks.” 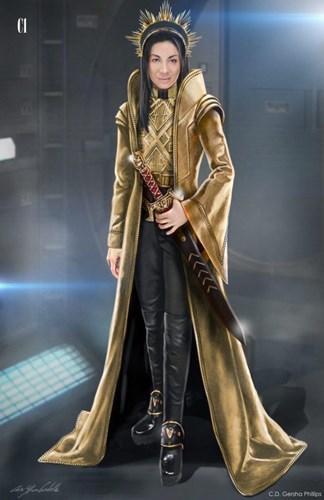 A Headdress Fit for an Emperor

“In one sequence we wanted to get this crown headdress. We found a local artist in Toronto and we had to replicate it for her character who is also in the play, so we had to create duplicates.

“I had seen this image of a sunray like a headdress that I found online, and that was something I wanted to do. I thought it was going to be made from metal, but the reality was different.

“We ended up using plastic and lightweight metal with foil. We added beads to add to the elements. We had tried to do that the year before, we did it in episode nine and completely failed on that. I had this elaborate idea that crashed and burned. But this time around we found this artist who did this great job.

“For the play, a smaller scale version was used but it was softer and still stood up to what we needed it to do, but we put it on the headband and it hit the beats. When you looked at it, you knew it was Georgiou.” 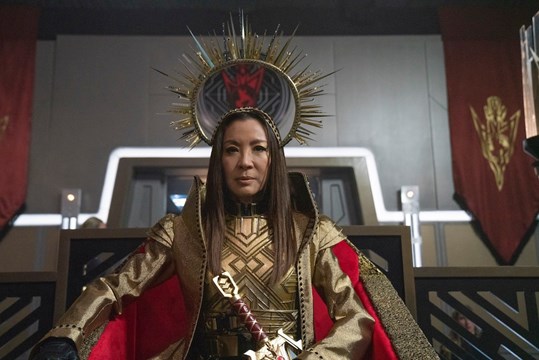 “We did a lot of different versions before we picked the one we went with. We used this jersey fabric that had a fleece back on it. It had a loftiness to it and we could manipulate it into what we wanted it to be.

“We bonded a scuba net behind it and that’s what gave it the molded shape, again it sits on the body in this cool way. The idea was that it doesn’t look like the regular uniform and looked like something you had never seen before,” Phillips says.

She also notes that she was influenced by “Space 1999” and “Logan’s Run”: “I remember how clean that looked. The thing is, there’s no mystery to the way things are appearing on TV compared to then because everyone has 4K or 5K and you can no longer hide anything, so the idea was to push it that much further.” 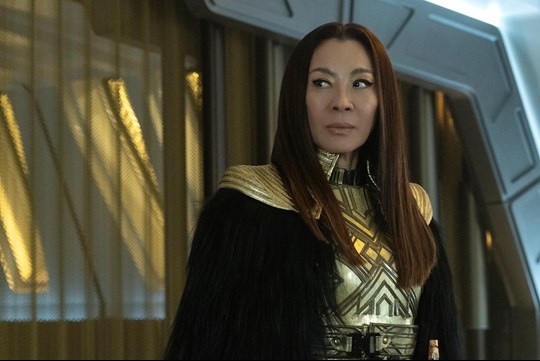