by: Edward Douglas, Below the Line

If you’ve been watching Joseph Gordon Levitt’s Mr. Corman on Apple TV+, you will have already noticed the way the creator and star of the show has been inserting fantasy sequences into the grim reality of his title character, an L.A. school teacher who just can’t seem to get all aspects of his life together.

If you haven’t watched Episode 3, “Happy Birthday,” then you might want to hold off on reading this “Making the Scene,” as we talk about a very specific moment in between Levitt and his character’s mother, as played by Debra Winger. Most of the episode seems like a fairly straightforward dramatic discussion between mother and son, but then, suddenly, the two of them break out into a musical dance number. It’s done so seamlessly that it almost seems impossible.

When Below the Line spoke to the show’s Cinematographer, Jaron Presant, ASC, we had to learn how that transition was achieved so seamlessly.

“One of the things we did was that I got chromaticity coordinates of all the different lights at the gas station where they pull over. There’s this blend of real shots on location and green screen shots on a stage well after the fact,” he explained, elaborating on techniques discussed in our earlier interview. “We shot the wide on location, and then we also shot that same wide on stage. When we shot on location we shot both the pull up and exit but also a backplate of just the car. So you’ve got a backplate that’s real world, you’ve got a full shot that’s all real world where they can drive up and they can drive away. And you’ve got an element of them on stage with light that’s matched exactly to the real world light.” 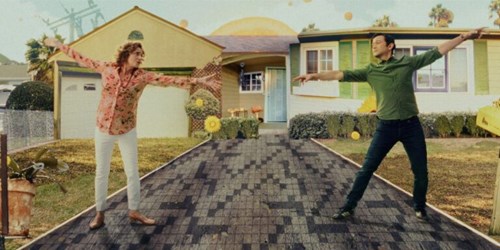 From there, he got into some of the more technical aspects of making the transition so seamless. “What that ended up allowing us to do is start on the real-world wide shot, then we cut to some close-ups, and then we cut straight back to that same wide shot, except this time, that wide shot, is actually a composite, using the green screen element and the gas station backplate, so that we can make the world dissolve away.”

“We can do the same thing in the opposite direction,” Presant continued. “We can bring the world back, but in regards to the light, all the color is exactly matched because of working with xy. The other thing that we did is I wrote a handheld algorithm for handheld movement on the image. (Note: As also explained in more detail in the previous interview.) While the conceit of the whole show is all handheld, how we actually got to that place is a variety of camera support systems. Sometimes, we were truly handheld on someone’s shoulder, and sometimes we were on Steadicam, and sometimes we were on a Ronin. In those shots that go to and from the dance sequence, we were actually literally just on a dolly. What we did was we ran it through my handheld algorithm, and because it’s an algorithm, we can actually adjust the variables to ramp the entire thing up and down as much as we want. The camera, when you first cut back to it, has this handheld motion that gradually fades away, as we transition into Josh’s fantasy in his mom’s house set. The same thing happens on the back end, where when they’re dancing, and everything’s fluid and stable in the dream sequence. When it slams back into reality, the camera ramps up the handheld, and it feels like it’s handheld again.”

The first three episodes of Mr. Corman are now available on Apple TV+ with new episodes every Friday. All photos courtesy of Apple.