Earth has been all but destroyed, and the last humans are being raised by androids.

It was clear from the trailer we saw last week that "Raised By Wolves" would be no ordinary sci-fi show. It teased a dark story, desolation and the destruction of Earth, and now the first three episodes are now available on HBO Max.

South Africa serves as the location setting for Kepler-22b, the first extrasolar planet that the Kepler Space Telescope found in the habitable zone of its star, in 2011. The exoplanet is portrayed as barren and bleak, although it evidently once supported organic life as the bones of some giant basilisk-like behemoth can be seen littering the landscape.

The first episode begins with a spacecraft not much bigger than an escape pod more or less crash landing on the planet's surface after, we assume, its 600 light-year journey. Inside are two androids, Mother (Amanda Collin) and Father (Abubakar Salim) and six human embryos. Everything that can be salvaged from the pod is removed and the process of making camp begins.

The cinematography shot by Scott's frequent collaborator Dariusz Wolski captures the bleakness of the situation well and echoes a similar technique used by Steven Spielberg when he deliberately reduced the color saturation by 60% in the film "Saving Private Ryan" as a way of visually establishing the emotional environment. 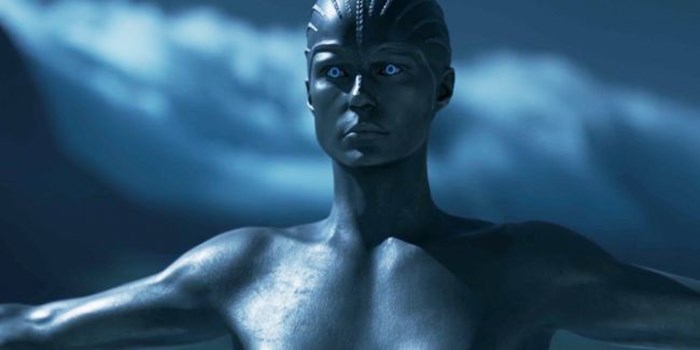 The first two episodes were directed by Ridley Scott, the man who gave the world some phenomenal movies, including "Alien" and "Blade Runner" and equally some forgettable movies including "Prometheus" and "Alien Covenant." So, if for no other reason, watching "Raised By Wolves" offers the prospect of glimpsing the direction in which Sir Ridley's creative juices are currently flowing since he's slated to be involved in an animated series set before "Blade Runner 2049," an untitled "Alien" prequel and a sci-fi project called "Tranquility Base."

The androids plug artificial wombs containing the human embryos into Mother with separate umbilical cords until they are ready to be removed nine months later. Father meanwhile continues to build the camp, explores a little bit and grows crops — or tries to, as all they seem to be able to cultivate are lots and lots of some weird space yam.

As the years pass, all but one of the children die, and this is one of our biggest grumbles — and we don't have many — as the reasons for the children's deaths are not adequately explored. They just seem to start coughing, fall ill and eventually die (with exception of one who just plummets down a very deep hole). Is this a result of a natural element in the atmosphere, the food, or some unknown contagion perhaps? We never find out, or least we haven't yet.

The lone survivor is a young boy named Campion (Winta McGrath). There's an interesting "nature versus nurture" undertone here; which would have the dominant effect, the information stored in the children's DNA that effectively shape their personality, or the influence of Mother and Father and their subsequent education? If this subject is of interest, you should absolutely watch the underrated movie "Raising Cain" starring the magnificent John Lithgow in a number of different roles. 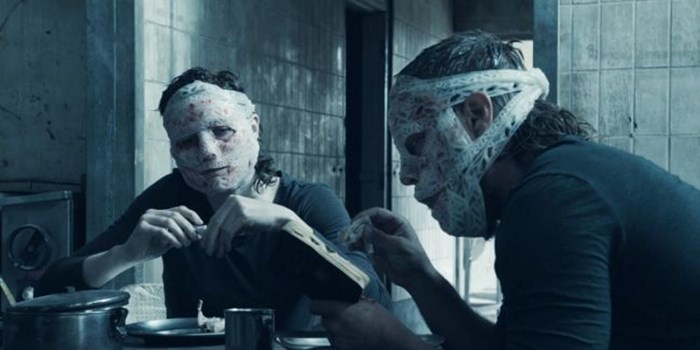 We're actually not going to tell you who this is, so as not to spoil the surprise. (Image credit: HBO Max)

It seems nature has won this particular battle as we learn that Campion has been secretly praying, despite the best efforts of Mother to dissuade him from any religious thinking whatsoever. Is religion and the need for spiritual belief something that we default to, even with the added deterrence from those who influence our upbringing? This is probably a question that has appeared on past exam papers for aspiring philosophy students.

Then an ark from Earth, carrying what's left of the human race, arrives in orbit around Kepler 22b. Mother and Father have a disagreement over what's best for Campion, so she impales Father on a giant fossilized fang, thus rendering him inoperative.

A shuttlecraft flies down to the encampment where Mother makes the newcomers feel thoroughly unwelcome. They call themselves the Mithrai and are in fact based on a real Roman cult that coexisted with early Christianity. Their uniforms are a subtle reference to the knights of the Crusades and prominently feature a sun god icon. Mother tries to hide the fact that she's an android, since apparently they're prohibited to raise human children — but the colonists, led by Marcus (Travis Fimmel) see straight through the attempt at deception.

The attention to detail is nice — as you'd expect from Scott — and most impressively of all, the performances by Collin and Salim, in pretty bizarre roles, are so good you never stop to consider it. They even add the occasional ever-so-slightly emphasized robotic nature to a specific body movement just to remind us that perhaps they might not be quite as fluid in their form or function all of the time.

And this is before Collin goes full "Fifth Element" on the newly arrived colonists. With Ash from "Alien"-like milky stuff beginning to dribble from her mouth like Cujo, she flies through the air as her skin transforms into some kind of hardened armor. There are, no doubt, going to be a lot of nuanced and transposed Biblical and religious references and undertones throughout all 10 episodes of this first season, starting with the Adam and Eve inference. Now we see Mother adopting a Christ-like posture as she melts the faces of most of the landing party, using some kind of sonic superpower that she emits as a particularly piercing scream. 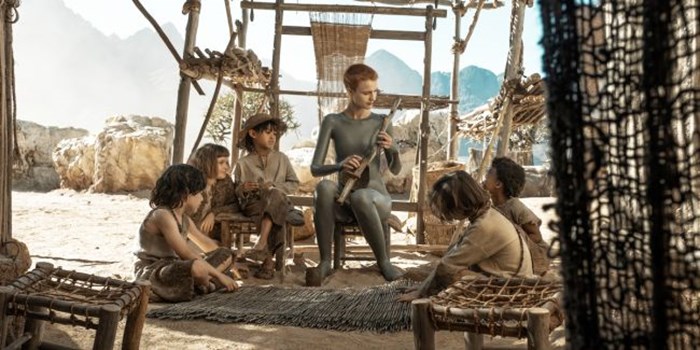 A few minor hiccups aside, everything seems to be ticking along on Kepler 22b, (Image credit: HBO Max)

Mother grabs Marcus' shuttlecraft, and Marcus fortunately escapes having his face melted before flying up to the Ark. Bluffing her way into the landing bay, she begins a rampage through the ship, like a demonic Dr. Manhattan, causing crewmembers to explode as she dials her death screech up to 11.

"Raised By Wolves" is dark, there's no doubt about that. It's probably not what anyone imagined or expected, especially since there was no novel, or series of novels, as source material to read first. The show was written specifically for television just a couple of years ago by Aaron Guzikowski, whose Hollywood debut was the 2013 movie "Prisoners" — a story about the lengths to which a father will go to rescue his kidnapped daughter, a similar theme seen in "Raised By Wolves" as the two androids also embark on a parental journey of sorts. Guzikowski also wrote the 2017 adaptation of the epic "Papillon," which wasn't terrible.

The darkness continues into Episode 2, which is largely made up of flashbacks to offer an insight into the backstory of the Marcus character. Again, it's probably not what you'd expected.

In fact, the second episode is probably better; it certainly stokes the fires of curiosity given the patchy information we were given in the premiere episode. The Marcus flashback, which also introduces his partner Sue (Niamh Algar), represents the pre-credit sequence and it's a full 12 minutes before the credits actually run. 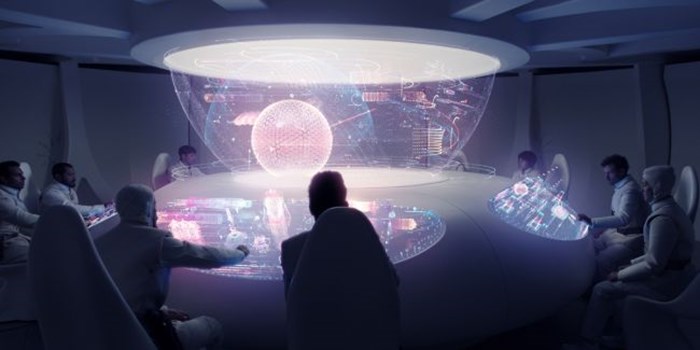 The bridge of the Mithraics' ark that arrived at Kepler 22b some years after Mother and Father. (Image credit: HBO Max)

We're also handed the revelation that not all is idyllic aboard the ark and that Marcus and Sue are perhaps not quite the couple that the Mithraics think they are.

"Raised By Wolves" is intriguing, there's no question about that. Thankfully, so far, it doesn't show any sign of having a J.J. Abrams-style excessive need for MacGuffins to move the story along, or a season-long series of unexplained plot points, like "Westworld." You might not fully understand what's going on, but you want to know more and that's the first indication of having a half-decent TV show on your hands.

It will be interesting to see if there's any noticeable shift in quality as the director's baton is passed from Ridley Scott to his son Luke and then on to Sergio Mimica-Gezzan, Alex Gabassi and finally James Hawes.

The first three episodes of "Raised By Wolves" are currently streaming on HBO Max and a new episode will drop each week, with Episode 4 airing on Sept. 10.