Headlines
Previous
Sub-Aquaman: How Underwater Cinematographer Ian Seabrook Gets His Shot
Next

About three years ago, when filmmakers were planning Disney’s recent box-office hit, Jungle Cruise, one key challenge involved figuring out how to lm the climactic sequence to the lm, a large portion of which takes place underwater.

The scene involves characters played by Dwight Johnson and Emily Blunt discovering a mystical, ancient tree that has potential life-giving powers, but is sunken underwater, dormant and needing to be raised to the surface by manipulating “puzzle pieces” embedded in stone. Realising the sequence required extensive and highly complex underwater work, and that, in turn, meant the lmmakers needed a world-class underwater cinematographer to collaborate with director Jaume Collet-Serra and cinematographer Flavio Martinez Labiano.

Relying on Seabrook’s expertise, Jungle Cruise’s underwater scenes were shot over the course of two weeks in late 2018 on a specially-configured tank at Blackhall Stages in Atlanta, using Alexa SXT Plus cameras with specially-designed Panavision lenses enclosed in a proprietary water housing. I recently caught up with him to discuss his work on the lm, and the broader challenges posed by the grueling art of underwater cinematography.

When joining a production like Jungle Cruise, what are the first steps you need to take to make sure the plan can be executed safely?

When they were constructing the ‘puzzle piece’ set, I started with several meetings with the art department, to ensure they were going to use the correct marine-grade materials, so that the set would not decompose or come apart in the water. It had to be a functioning piece, painted with Mayan script and puzzle pieces attached to it.

They built a tank with heated water, and eventually used a construction crane to lift the set into the water on a stage at Blackhall 2. From there, I inspected the set daily with the marine coordinator, and made special note of anything that was floating, and any particulate that was coming off. Any time a set goes into the water, there will be air bubbles as the set gets used to being submerged. Whatever materials are used will get waterlogged, and sometimes, they can come apart in a bad way, affecting visibility in the water.

So, there were lots of meetings. Then, you work with the stunt team on preliminary stunt rehearsals. I always observe the stunt rehearsals to make sure the camera is not placed in a spot where the motion-picture camera might not t later. Stunt visualisation can be great for the stunt team to work out their own parameters, but it can be limiting sometimes for camera placement. So, all kinds of meetings and steps are taken long before I get into the water.

So, you get personally involved in safety and logistical matters during prep? It’s not a situation where you simply show up on the day, dive and shoot?

Not hardly. I remember doing a picture once with the great cinematographer Don Burgess ASC. One of the crew looked at me and said that looks like so much fun, “jump in and let it rip”. Before I could reply, Don cut him off and said, “it’s actually an incredibly difficult job.”

You have to use your diving skills, you have to compose, grip and direct underwater when the director or AD can’t communicate through the underwater speaker. You are the first in line between the talent and what the director wants. You also have to be a safety diver in case an actor gets into trouble or gets confused. You might also have to redress parts of the set or adjust other underwater elements for practical effects if there is a bubble line or whatever. And, of course, you have to operate and adjust the camera. So, you wear many different hats doing this kind of work.

What about dealing with the lead actors—in the case of Jungle Cruise, Dwayne Johnson and Emily Blunt?

That’s usually the first question I ask, “Who is going into the water?”. I study their resumé and see in advance if they have any water experience. In Dwayne’s case, he had previously done Baywatch. Emily, to my knowledge, hadn’t done any water work, but for someone who had not, she was remarkable – very skilled at holding her breath while acting.

The thing is, people can be petrified and scared underwater, which obviously makes it hard to act, and then they might be dealing with a set that has a specific escape route that isn’t easy, and it might be dark or there might be confusing interactive lighting down there.

On Jungle Cruise, we had the side of the set open so that Emily could swim out. I always design an escape route for the talent and physically show them where it is. The problem is their schedules. The production may tell us we only have the person for 20 minutes before they go back to main unit or some other obligation. So, you have to work efficiently in short periods of time. But that said, they were both great in the water. 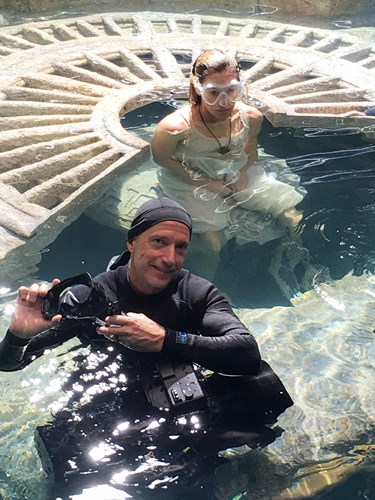 I would imagine your camera housing is of huge importance.

It’s a custom-designed housing. The one I use has an internal rib design to help dispense and dissipate heat. On a set like Jungle Cruise, there is not much room to move around inside the tank. We also try to make sure the weight is balanced – not too much effort pulling down or pushing up. But really, balancing a housing underwater is not too much different from balancing a Steadicam or Libra head on dry land.

The camera housing is slightly negative and will sink if left alone, because if it floats, that isn’t good. But, by having perfectly trimmed and balanced cameras, I can concentrate on filming images, and not have to fight the camera housing so much. I try to forget my diving and the balance on the camera and just think about the four corners of the frame. At the end of the day, it should just be about composition and the shots and swimming enough to keep up with the talent.

There have been many custom designed housings for lm cameras in the past, including the Hydroflex, which was pretty much an industry standard for lm work. Shooting lm or digital also impacts size and weight. For digital work, such as Jungle Cruise, however, I prefer my own custom-designed system.

So, you typically do most of the ‘heavy lifting’ yourself? That must require great levels of fitness and training?

Typically, I don’t have any help beyond a surface assistant who pulls focus remotely, hard-wired by cable to the housing. That’s one of the two cables down there – the other one is an HD cable going back to the DIT on the surface. Remote focus pulling is not unusual these days, and we make sure to have enough cable so that they won’t get yanked or have the unit pulled out of their hand.

For digital work, the camera housing can range anywhere up to 80lbs, depending on camera and lens configuration. That can be heavy underwater, so you just have to muscle it. You are basically using your shoulders, hip flexors and your stabiliser muscles to keep the camera buoyant. Sometimes, for me to have a breathing tank on-set for Jungle Cruise. So, my tank was outside the set, connected to a long hose that I grabbed if I needed air.

So, yes, to be an underwater cameraman, you have to be in really good shape. I have a commercial diving license and a diving medical done every year, getting a stress test and checking heart rate and other stuff. I’m forced to stay in shape. I do weight training, running, cycling and other things year-round.

The other thing is longevity, once I go into the water. You might come out for a pee break, unless you are in the ocean of course, but I hardly ever come out of the water. You have to have stamina. I basically have four drink vessels filled with different things. One has a shake in it, one has green tea, one has water, and so on. When I come to the surface, I’ll ask for the green or the red bottle and I get a quick drink. It’s not really different from what athletes do during a triathlon. In fact, the fitness level has to be about the same, especially if you are in the open ocean.

Sounds like you put all that training and fitness to good use on Jungle Cruise.

There is a scene near the end when the set comes out of the water, and we were discussing how could we do that. Typically, you would speed-rail the camera housing to the set, so that the camera and the set are rising at the same time. But we discovered where the storyboard wanted the camera to be, there wasn’t any hard place to bolt the camera housing. I proposed a pass where I stood on the set, holding the camera, and then, using the construction crane, they lifted the set out of the water. We had an 80lbs camera and housing system in the water. But when a set gets lifted up, all that water weight and mass pushes down on you as you are attached to the set. I was just standing there in my flipflops. I held my breath as we came up, but once the set was lifted out of the water, the shot was not over – I had to hold the shot all the way. You have to be in good shape to lift that kind of mass and capture the shot under those conditions.

Michael Goldman is the author of The Making of Disney’s Jungle Cruise, for those who want to learn more about how the lm was put together.