Though "Jungle Cruise" is a CGI-fueled blockbuster, there is one scene where digital effects were thrown aside for good old practical filmmaking.

Towards the end of the treasure-seeking movie based on the iconic Disney attraction starring Emily Blunt as botanist Lily Hughton and Dwayne Johnson as steamboat skipper Frank Wolff, the stars encounter an underwater lever they must pull down to continue their journey.

Outside of the CGI piranhas, the entire scene was done over a two-week period in an underwater set on a studio lot in Atlanta. Blunt and Johnson did most of the underwater acting.

Insider chatted with the movie's underwater cinematographer Ian Seabrook about the challenges that went into pulling off the scene and why he was impressed by Blunt's performance as she'd never done an underwater shoot before.

Emily Blunt's Lily character in "Jungle Cruise" struggles to get to lever down. Disney+

Despite never having done an underwater scene, Emily Blunt showed no fear

Seabrook is one of just a handful of DPs Hollywood turns to when they need underwater photography. He has worked on everything from Christopher Nolan's "Insomnia" to "Deadpool 2" and has the stories to prove that doing underwater shoots are not for the faint of heart.

"On 'Batman v Superman' myself and Amy Adams both got ear infections from the rust from the underwater set because the crew didn't use marine-grade materials," Seabrook told Insider. "Having your ears vacuumed is not a pleasant way to spend your afternoon."

So Seabrook was all business when he was hired to do the underwater sequence on "Jungle Cruise." 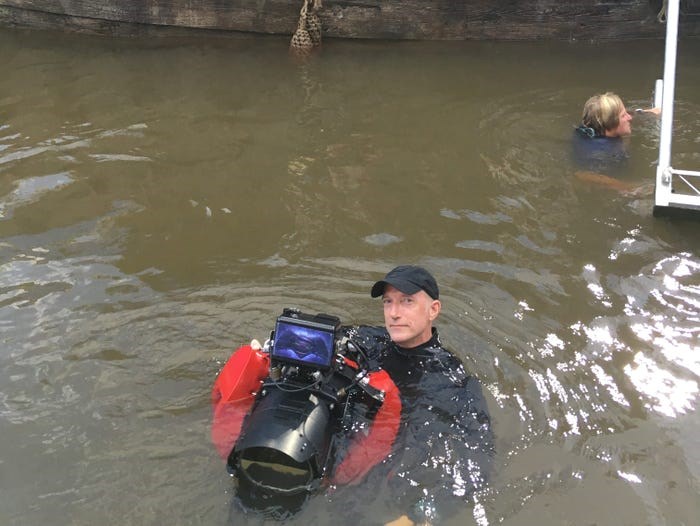 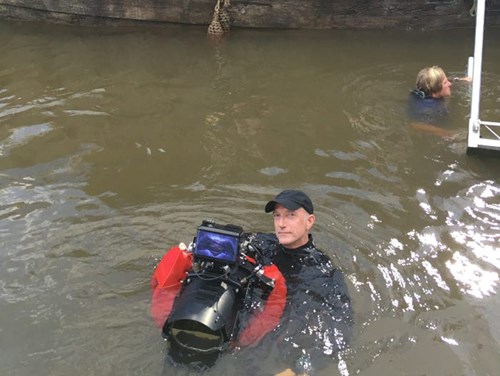 But Seabrook said what was most important was to understand the comfort level the actors have with the water. Are they scared of the water? Are they good swimmers? Having worked with Johnson in the past he knew The Rock was good to go. But what about Blunt?

"If she was fearful she did not communicate it, she was game," Seabrook said.

Two locations make up the water sequence. First is the shot of Lily and Frank jumping into the water at La Luna Rota. That was filmed on an exterior set. Seabrook said the biggest challenge for this portion of the shoot was him and his waterproof camera staying the right distance from Johnson when he got into the water.

"When Dwayne took his first breaststroke, the first take he did he ended up right on top of me," Seabrook recalled. "I realized how powerful he can swim, so on the takes after I had to lurch back underwater quickly and was balancing on the tips of my fins underwater so that when he swam down I was able to get enough distance to pull off the shot. I basically had to be at the same velocity that he was swimming."

Ian Seabrook had to get familiar with Dwayne Johnson's strong swimming. Disney+

The rest of the sequence took place in the tank.

The DP said knowing where to bail out is important as the actors are doing everything while holding their breath, and panic can set in if you feel you are losing breath and don't know how to get to the surface.

Seabrook said both Johnson and Blunt held their breath for up to 30 seconds when doing takes for the sequence. And they did this over days of shoots for two weeks.

But that wasn't the only waterwork. Seabrook and Blunt still had to team up to pull off the sequence's finale.

Emily Blunt had to stay on the set as it was raised to the surface. Disney+

In the thrilling finale of the underwater sequence, Lily finally gets the lever down before running out of air. Suddenly the structure rises to the surface and we see Lily unconscious laying on it.

To shoot that part of the scene — Lily floating unconscious underwater and then laying in the structure once on the surface — Seabrook and Blunt had to be on the set as it raised out of the water.

"Normally you would strap down the camera to the set with no one operating it, but when I saw where the camera needed to be I felt there was no way you could do that, so I proposed that I could hold onto the camera myself," Seabrook said.

After a successful test, Seabrook and Blunt went into the water. For 15 seconds, as the large crane pulled the set out of the water, Blunt acted like she was unconscious while Seabrook held onto his 80-pound camera as the set emerged out of the water. 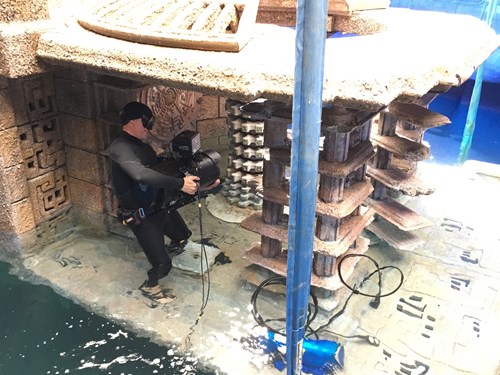 Ian Seabrook held onto his 80 pound camera as the entire set raised to the surface. All while holding his breath. Peter Lee

"The camera becomes heavier and heavier as you get closer to the surface," Seabrook said. "We did it eight times and for each we had to hold our breath, probably for 15 seconds, but it felt longer than that."

Seabrook said the highlight of working on "Jungle Cruise" was working with Blunt. He was impressed that despite being a novice in acting underwater she was completely all in.

"I really admire Emily's work in this, I had no idea what her comfort level was in the water," he said. "She was stone-cold with her calmness."

"Jungle Cruise" is currently available in theaters and on Disney+.