The Rescue revisits a perilous mission undertaken by a team of divers to extract a dozen young soccer players and their coach trapped in a cave system in Thailand after an unexpected flood. The tense incident drew worldwide attention in 2018, as the fate of the boys and their guardian rested with the expertise of the Royal Thai Navy SEALs, tasked with supervising the mission, and a specially trained British unit.

Some of the most suspenseful moments in this new documentary are depicted in dramatic reenactments of the rescue effort. The work of underwater cinematographer Ian Seabrook in recreating key events — discussed in detail in this article — served as a vital strand in a complex visual web that includes interviews with the principals, a tapestry of international press footage, and video footage shot by the SEALs. The military footage, which was captured primarily in the main rescue staging area (known as Chamber 3) within the Tham Luang Nang Non cave system during the actual rescue operation, has not been seen before.

“Our goal was to create a holistic view of the rescue out of all these fragmented perspectives, and when we started, there was very little footage from inside the cave,” says E. Chai Vasarhelyi, who directed the National Geographic documentary with her filmmaking partner and husband, Jimmy Chin. “We’d heard rumors about the Thai Navy SEAL footage, but at that point we hadn’t seen it and didn’t know if we’d be given permission to use it.”

The 87 hours of SEAL footage yielded a gold mine of visual connective tissue — “the most exciting thing that can ever happen when you’re making a doc,” says Vasarhelyi — though that perspective did not extend beyond Chamber 3, whereas the children and their coach were eventually found about two miles from that location, in Chamber 9.

“Except for a few GoPro shots the cave divers had [captured] themselves, we had no footage of the actual rescue,” says Chin.

“We needed to cover the big dramatic beats, which were pretty clear,” adds Vasarhelyi, “and our choices were reenactment or animation.”

“Our goal was to create a holistic view of the rescue out of all these fragmented perspectives.” 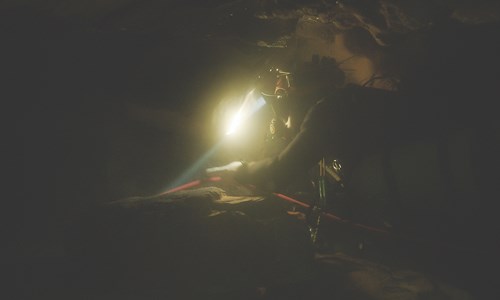 The 10-day reenactment shoot at Pinewood Studios’ Underwater Stage in England marked the first time the directors were able to work in person with some of their camera team and the cave divers. It was October 2020, and the Covid-19 pandemic had siloed nearly everyone involved in the production.

Los Angeles-based cinematographer Seabrook flew to the U.K. for the Pinewood shoot and used his quarantine time to prep. “I pored over research materials about the actual event for many hours,” he tells AC. “Given the short window we had to shoot this, every element had to be meticulously planned. Once out of quarantine, I met with 1st AD Joey Coughlin and line producer Tibo Travers to discuss the shooting schedule, props, set design, wardrobe and SPFX requirements, and coordinated with Jimmy and Chai by phone and via Zoom. It was in no way normal prep, but by the time we all met for the first time, we were ready.”

“The [reenactment] process was really useful, because the divers are meticulous and they showed us exactly what they’d done,” says Chin, who had previously collaborated with Vasarhelyi on the Academy Award-winning 2018 documentary Free Solo. “We needed to dig into all those details, because for us, the bar for authenticity is really high. With Free Solo, we wanted a general audience to appreciate it, but we knew the most salty, strappy old climber had to buy it, too. We wanted to bring that kind of authenticity to The Rescue.” 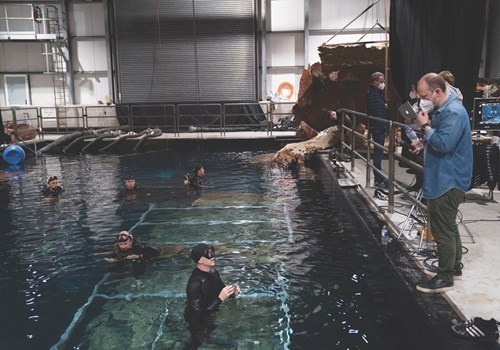 Using 3D scans of the Tham Luang cave system, Rod Vass, of the U.K. company Armordillo, created a replica of select cave sections — which were submerged in 20' of water at the 66'x33' Pinewood tank, whose water capacity is approximately 317,000 gallons.

“As the pandemic had caused shipping delays in construction materials for Vass to use on the sets, there was not enough cave set and we were running out of time,” Seabrook says. Fortunately, while surveying the tank, the cinematographer noted rock-wall sections left over from another production, stored under the stage ramp. “When I found the cave sections at Pinewood, I called Rod Vass to see if they could be painted the same color as the cave sets he was working on.” Seabrook and 1st AD Coughlin then transported the pieces to Vass’ facility in Southern Wales, where the sections were successfully incorporated into the construction — effectively doubling the size of their set.

“We were all keen to represent the divers’ incredible work properly, and everyone was deeply invested in telling this story.” 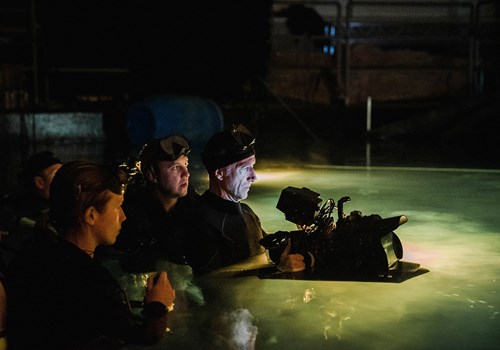 With “vérité” as his brief, Seabrook outlined his rough shooting plan for the divers, and then “asked them to ignore what I was doing unless there was something specific we were looking for within their actions,” he says.

Seabrook shot with an Arri Alexa Mini LF safeguarded by an underwater housing he’d made, capturing in Open Gate using Zeiss Supreme Prime and Supreme Prime Radiance lenses. “It was important to maintain a small footprint in the cave sets, which had some very narrow passageways, and I felt the large format would serve the production if Imax exhibition was proposed,” he says. (Though The Rescue does not have an Imax-certified version, the movie was projected on the Imax screen at the Toronto International Film Festival.) In regard to the combination of lenses, he adds, “The Zeiss Supreme Radiance have a [coating called] ‘T* Blue,’ [which creates a blue flare that] I felt would give some shots a unique look, given the beams from the divers’ headlamps would be flaring the lens,” he says. “The Zeiss Supreme had a different, softer, non-blue flare — [so] the flares [wouldn’t all] look similar.”

Rating the camera between 1,000-1,600 ISO, he shot at T4 “to not only give focus puller Dean Thompson a chance, but also to mask the at-times lack of set I was shooting around,” Seabrook notes. He adds that he had conducted tests at 800 ISO on the Alexa with the Zeiss primes wide open and found the veiling glare too significant when the divers’ headlamps hit the lens, creating a washed-out look. The lifted blacks of the veiling glare also revealed the limitations of their set, so Seabrook elected to shoot at a higher ISO in order to stop down and control the flaring and lifted blacks. “Also, I felt the lenses performed better when [they weren’t] wide open,” Seabrook notes, “but there were times when I opened up to [as wide as a] 2.8. I was in daily communication with [supervising colorist and ASC associate] Stefan Sonnenfeld at Company 3 about my levels. Dailies were [performed] by Company 3 in London and beamed to Stefan in Los Angeles, who examined the grade and LUT, [which I] and DIT Joe Steel had selected.”

Special-effects coordinator Chris Hubbard used industrial-strength pumps to give the water a level of turbidity that matched what the divers had experienced in Tham Luang, where monsoon rains and raging floodwaters had created near-zero visibility. 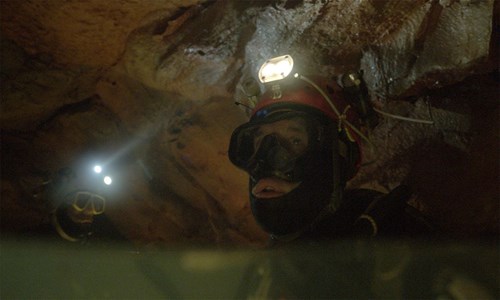 To create a “no-light” look underwater, Seabrook and underwater gaffer Aaron Keating embedded the Astera Helios and Titan LED tubes and HydroFlex HydroFlo fluorescent tubes in the set. “I would do a few passes with the camera to see if I could see any sources glowing, which I would correct if I did,” says Seabrook. “Aaron and I devised a chocolate-and-coral gel combination that we used at 3,000K so the [light from the] Asteras wouldn’t look white; this accurately represented the divers’ helmet lights bouncing against the mud and rocks. [Mobile-LED-lamp manufacturer] Scurion also gave us some lights, and we added ND [gel] — and in some cases diffusion — to the [lamp] heads. We used Opal [diffusion] on some and 216 on others."

“I used 12'x12' blacks to drape between the gaps in the sets and act as negative fill,” he adds, “and we bounced light from portable custom underwater LEDs, Titan tubes and HydroFlo sources into Grifflon underwater — below [the divers] and to whichever sides of the cave set we were looking at — to add a bit of ambience.”

David Katznelson, BSC, DFF and Picha Srisansanee performed cinematography duties for The Rescue’s interview material — Katznelson in the U.K. and Srisansanee in Thailand.

As unusual as the project was, “it was a great collaboration,” Seabrook says. “We were all keen to represent the divers’ incredible work properly, and everyone was deeply invested in telling this story.”