Written by David S. Goyer (The Dark Knight Trilogy, Batman v Superman: Dawn of Justice), Blade boasted a slick, badass attitude that still holds up with 21st Century fans. It revolutionized genre cinema and provided an impressive template from which all dark superhero films would follow. (I see you, Underworld!) And that's not to mention the showcase it provided for Kris Kristofferson as Blade's grizzled sidekick mentor, Whistler, and Stephen Dorff as the dastardly bloodsucker Deacon Frost.

Blade's startling visual design was mostly the result of fine lens work by award-winning Dutch cinematographer Theo Van de Sande (Wayne's World, Volcano). SYFY WIRE spoke with the respected filmmaker for Blade's 20th anniversary to learn the secrets behind how this influential superhero movie was crafted and why it still slays nearly a quarter century later.

Van de Sande also offered us an exclusive selection of rare behind-the-scenes production shots and wide-screen camera stills, which you can witness in the full gallery below. 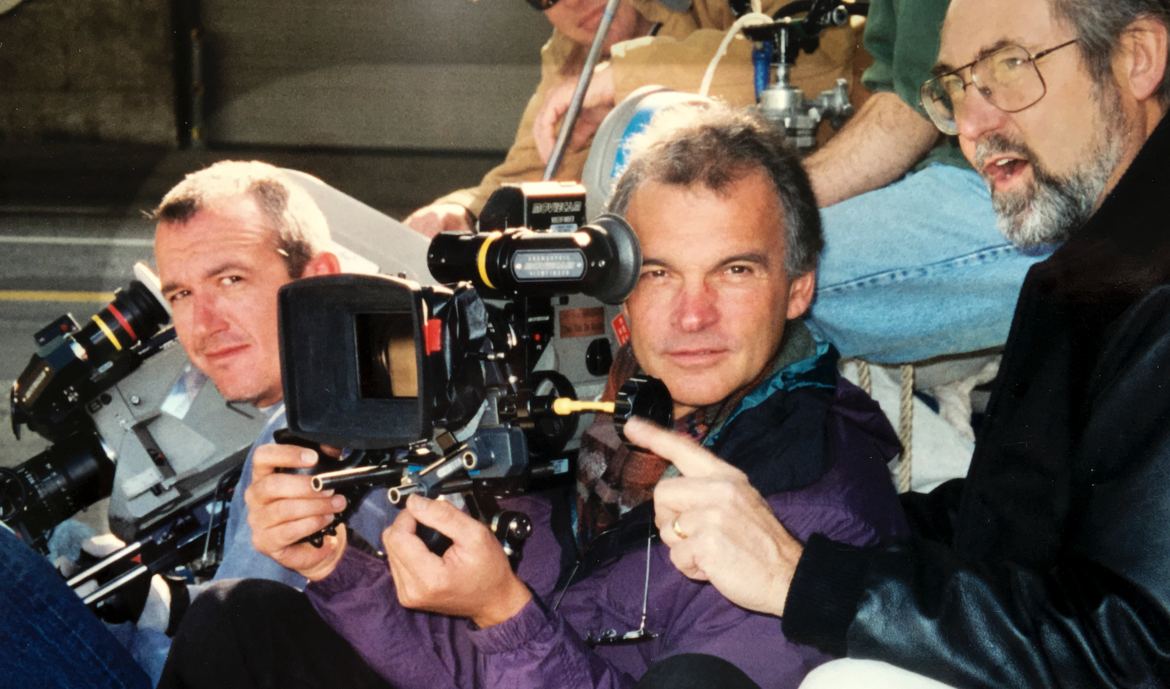 What elements of David Goyer's Blade screenplay made you want to sign on to the project?

Theo Van de Sande: When I got the script for the first time, I'd just finished Volcano, a $100 million visual effects film. I read the Blade script and after seven pages I threw it against the wall and said, "I'm not doing this." My wife convinced me to read the other 110 pages, so I finished it. The beginning of the screenplay has unbelievable violence described, and I have nothing against violence if it has a function in the story.

I got very intrigued with the world that David created — I could feel it. It was not a supernatural world, it had comic book elements, but it had a basic grounding in an impossible world that you can create visually. And the violence is against vampires, so it's not violence directly related to what's around us. The characters were interesting and I hadn't read the comic book and also didn't want to because I get another feel for it than what I have to create.

Were you a fan or reader of comics before you took on this movie?

I was a fan as a child but am not a fanatic comic book reader. I like them because they can go extremely far in the visualization of a story. Here in Belgium, we have some very good comic books but not supernatural ones and not Marvel comics. At the time we started the film, there was not an example of any comic book film yet. This was, in fact, the first Marvel comic book movie and the first black superhero movie.

How was it working and collaborating with director Stephen Norrington?

He was much more than a director, he was creating and really designing the world around the story, inspiring the visualization of the project. He's a difficult director but had very good suggestions; he was just 33 years old when we started the film, and I had done something like 40 features by then.

I liked his approach tremendously and especially his challenging suggestions. We talked about rhythm, scene impact, framing, camera movement, and lighting extensively. It was the first film where the visual effects were digital and the film was on film. So you could not change the final look of the film.

How did you go about giving Blade a distinctive visual style?

We did a lot of tests. First I had to convince New Line to do this film in anamorphic to give it a real big look. The budget wasn't that much, like $45 million. We wanted to capture a world that was not too far away from what the world looked like then. We created the world from scratch — it was basic, understated, and something you can believe in.

The first Alien film also had that approach, like in the spaceship. It was very normal and because of that, you could feel for the characters. That's what we were after.

Also, music-wise, there was techno music in that opening scene and that was an idea of Steve Norrington. If you hear the music today it still works. There are a lot of elements that work together to give that film a very different and specific look.

Can you tell us how the famous Blood Club scene was filmed and what techniques were used to capture the horrific red rain?

What we did in creating the Blood Club, it had a lot of technical elements to deliver a feel of something never seen.

We wanted to give the blood a particulation, so I used a strobe light that was connected to the camera. Because of that, the blood becomes very stylistic due to the short exposure and gives a very harsh feel to it. Also, I created a [new] camera, one designed with an anamorphic lens equipped with a viewfinder, so we could do a lot of hand-held in the action scenes. The choice to do it anamorphic gives it more impact.

The epilogue scene in a snow-dusted Moscow really stands out. Where was that filmed and what were its challenges?

Very simple, there was no money for going to Moscow. We shot this on the back lot of Universal Studios.

It's not a difficult scene, we did it in a few hours. [For] the snow, I created a very blue light and we didn't show more than the building's arches. Then we had the insert shot of Moscow, a day shot without snow. We completely changed it digitally to night and [made it look like it was] snowing. It was a very expensive shot but it was the only way to give the end of the film so much impact.

Why was Wesley Snipes the perfect person to play Blade?

Wesley was Blade! It wasn't that he was like Blade, or that he played like Blade. He was Blade!

When he came onto the set he had his posse around him and they'd stride onto the set. They flowed into the space. I dealt with him a lot and liked him a lot. We had a good time together. He was also a co-producer on the film. 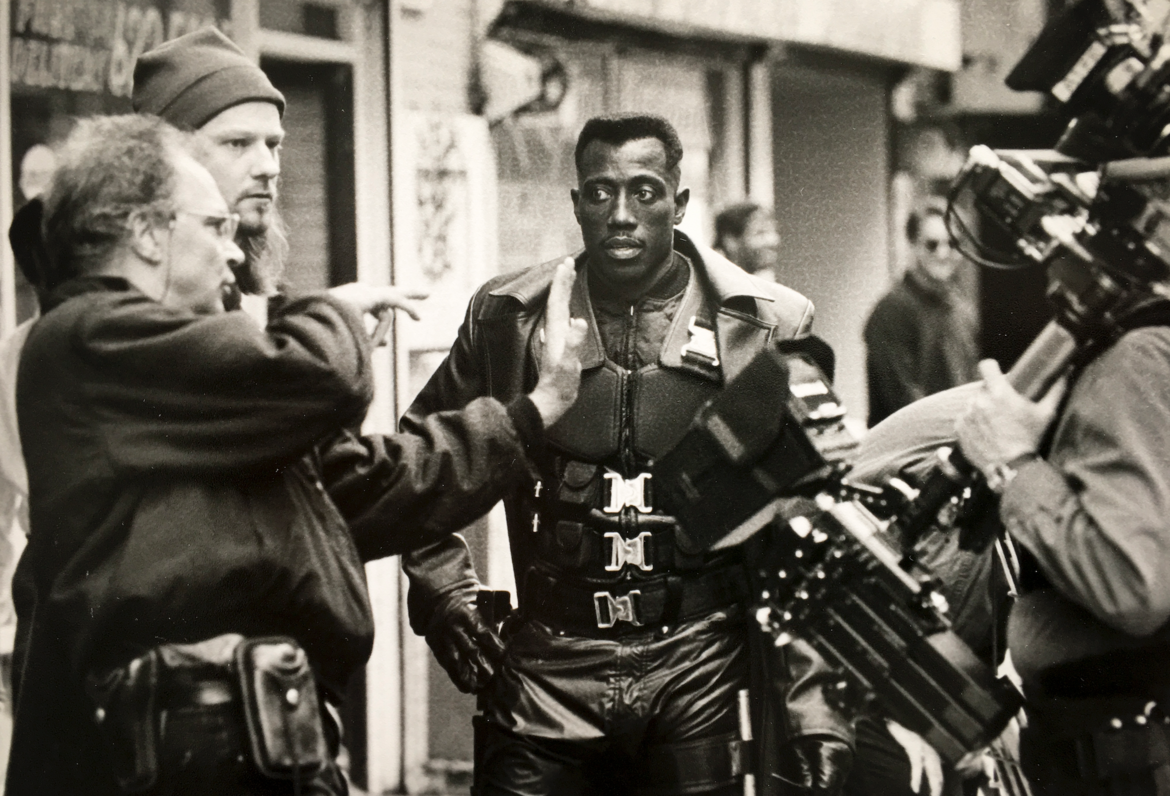 Looking back 20 years, what did the movie teach you and where does Blade rate in your long career in Hollywood?

I saw the digital world coming after doing Volcano. The digital format had more possibilities but it made it more difficult to keep the consistency of your style. So with Blade, I stayed with the post-production and created an extra negative role of all the shots linked to visual effects to show the effects supervisor how the shot was going to look in the end. If I wanted to stay in control of my images, I needed to dive into the technology of digital. I'm one of the few older DPs who really likes to work in the digital format.

I rank Blade high in my career as a cinematographer. The visualization of the film and the storytelling rates as one of my best. It was very complicated and grounded. Blade has a complete creation of a world, so I'd say out of ten, [it's an] eight-and-a-half, maybe nine. It was a big achievement for the money we had and the quality of the work. 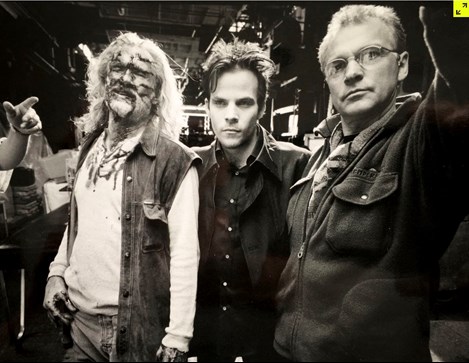