Costume designers for four shows, including 'Emily in Paris' and 'And Just Like That,' rely on small fashion brands to give characters "unique style." 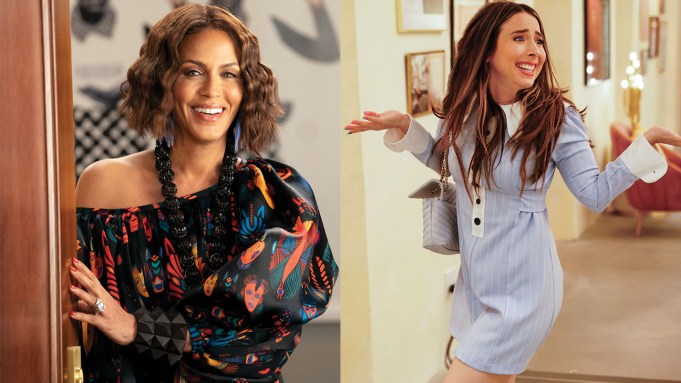 In the And Just Like That premiere, documentarian Lisa Todd Wexler (Nicole Ari Parker) swans over to the table of a starstruck Charlotte (Kristin Davis). The “International Best Dressed List” character was originally scripted as “wearing head-to-toe Chanel.”

But to illustrate her esteemed chicness, the Sex and the City sequel costume designers Molly Rogers (@mgrmgm) and Danny Santiago (@the_danny_santiago) changed course with an infusion of selections from independent labels, like made-to-order handbags by Florentine Veronica Silicani, statement jewelry by London-based Ghanaian designer Efema Cole, and a carnival-print party dress by zero-waste Berlin brand Rianna + Nina. “We wanted to give her a very unique style,” says Santiago, eschewing the expected “copy of a runway look.” 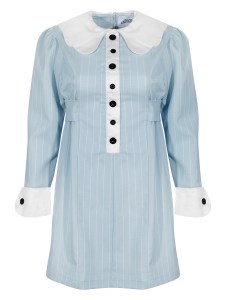 Joining season two of Hulu’s Dollface, Melissa Walker (@ruckusaurus) sought to further differentiate each of the show’s millennial leads through a distinctive mix of up-and-coming labels. “To actually give aesthetic range,” explains the costume designer. “Just going to the mall post-COVID, so many things have blended into the same aesthetic.” For instance, Walker leaned into the “cutesy, playful, Y2K” quirkiness of Izzy (Esther Povitsky) with a pilgrim collar dress from sustainable Francophile label Olivia Latinovich. For Dollface‘s Jules (Kat Denning), who dons sweet, but grunge-y florals, Walker looked to her own early-2000s-referential line, Land That Look, locally-made from deadstock fabrics.

Similarly, Euphoria‘s Heidi Bivens (@heidibivens) says that since season one, “I’ve had an objective of trying to create looks that couldn’t be called out or pinpointed so easily.” Over two seasons of dressing the hit show’s way-too-cool teens, Bivens has sparked trends and online shopping sprees.

As Emily in Paris costume designer Marylin Fitoussi (@mshangaimx) sees it, incorporating cutting-edge visions into a television show can serve a deeper mission. 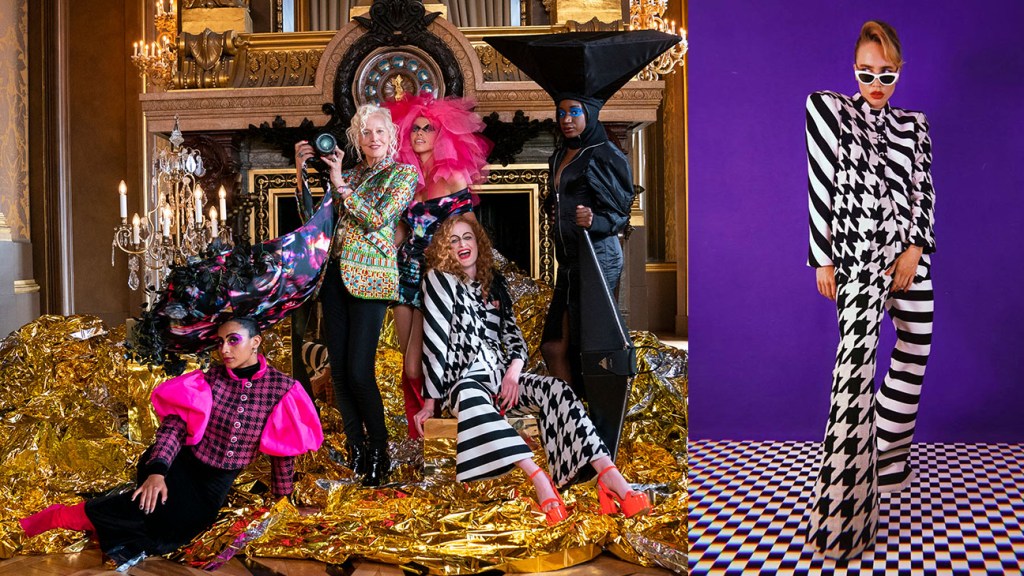 A fashion show scene on “Emily in Paris,” lensed by Ellen von Unwerth (center), included a black-and-white stripe and houndstooth look by designer Solène Lescouët (currently out of stock). COURTESY OF STEPHANIE BRANCHU/NETFLIX AND SUIT: COURTESY OF BRAND

All four of these costume designers also look to independent labels on the forefront of eco-conscious and ethical practices. “There is a real opportunity, as consumers, to be able to use our buying power to create positive change in regards to environmental concerns and sustainability,” says Bivens. “That plays into this whole idea of supporting these smaller designers, as well, who are creating clothes in a more handcrafted way and moving away from fast fashion.” 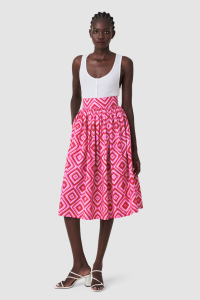 Skirt by Eliza Christoph seen in And Just Like That. ELIZA CHRISTOPH

Isa Boulder, an Indonesian brand which focuses on ethical production through employment of local artisans, saw its mesh sleeveless sweater worn by Sydney Sweeney on Euphoria. On And Just Like That, for an advice brainstorm regarding her own teen, Charlotte wears a pink and white skirt (suggested by Davis herself) by New York-based Eliza Christoph. The sustainable luxury label creates income opportunities for women artisans in Kenya and other African countries.

Referred by Philippine Leroy-Beaulieu — who plays Emily in Paris boss Sylvie —  Fitoussi collaborated with the Paris-based Renaissance Project for upcycled custom designs, including Sylvie’s architectural power suit reworked from vintage judogis. The non-profit Renaissance Project helps people from marginalized communities, with limited access to the regular job market, through haute couture sewing training. “People are starting to think about the responsibility that we have to limit the fast and furious consumption regarding clothes,” says Fitoussi. She also looked to Rianna + Nina for a vibrant, one-of-a-kind jumpsuit made from vintage scarves for Jeremy O. Harris’s guest spot as fashion enfant terrible, Grégory Elliot Duprée.

Similarly, Walker infused Dollface wardrobes with pieces by local manufacturer Bomme Studio, using ethical labor and sustainable practices, size-inclusive slow-fashion brand KS Gardner and eco-conscious loungewear by Naia. For free-spirited power player Stella (Shay Mitchell), Walker also found an “modernized retro” and very Insta-friendly poolside set, made from repurposed terry cloth by Zingara Vintage owner Erin Silvers. Prior to the season two release, Walker proactively contacted ShopYourTV to ensure coverage of the brands — even providing the site with wardrobe credits and links for click-to-buy. “I wanted to focus my efforts on independent designers that have been having a hard time staying afloat, or that can’t afford a marketing campaign,” she says. 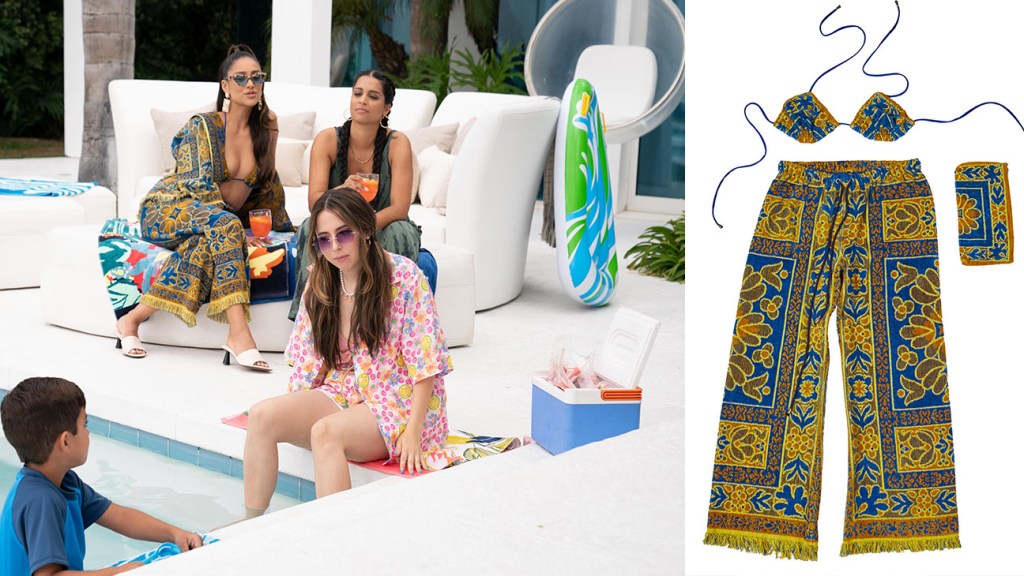 And while many small fashion businesses have struggled and even shuttered during the pandemic, a few have made crucial sales thanks to exposure on these shows.

In Emily in Paris, after Sylvie slow-walked into lunch to meet her younger lover’s friends in a sheer, paneled knit dress by Weinsanto, it immediately sold out. And after Biven outfitted Euphoria‘s confident and confrontational Maddy Perez (Alexa Demie) in two outfits from L.A.-based Parisian-inspired Miaou in a recent episode (including its Ginger Dress in Azul), searches for Miaou jumped 25 percent, according to global fashion shopping app Lyst. 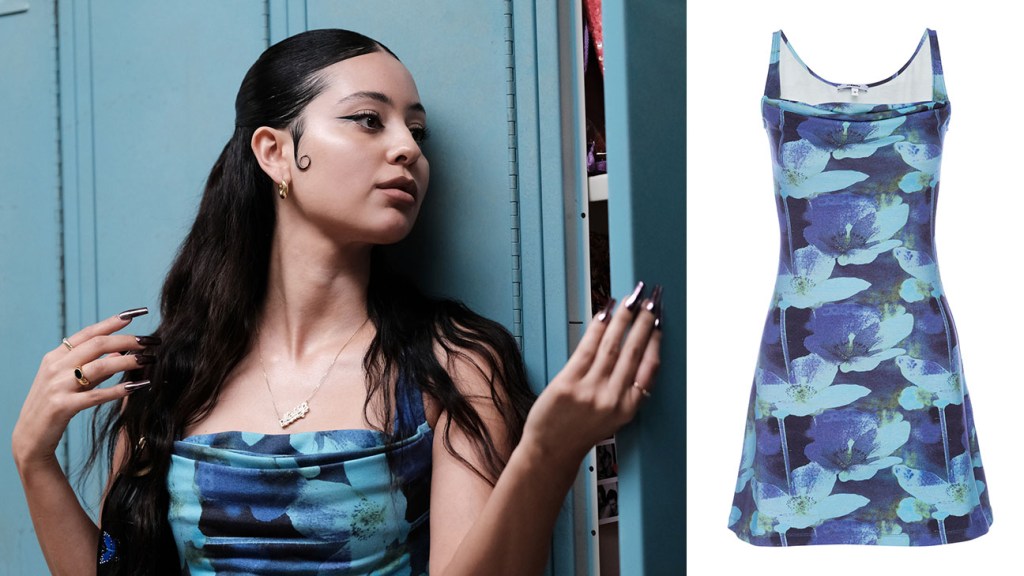 Buzz can even begin a show premieres: Last summer, the paparazzi caught Sarah Jessica Parker, as Carrie, filming And Just Like That outside. Images of her wearing an asymmetrical boater by Brooklyn milliner Rodney Patterson’s Esenshel label immediately went viral. “I was just so excited and wanted to support him. Now he has a store in the East Village,” says Rogers, who, with Santiago, also focused on spotlighting BIPOC-owned brands.

Bivens compares the impact of the TV placements to fashion magazine editorials. “It’s really exciting to feel like you can contribute in that way,” says the costume designer, “and actually be a part of this larger community of designers who are out there trying to make a go of their business.”