Warning: Spoilers for 'PEN15' season two, episodes one through seven, below.

The second season of "PEN15" kicks off with a certain teenage rite of passage, which gave costume designer Melissa Walker more opportunity to lean into intentionally cringey — and uncomfortably relatable — early-2000s fashion.

"'Oh shit. Pool party,'" she laughs, on a call, about her immediate reaction to reading the script. "It was a challenge enough to strap down their bosoms in the first season. I'm like, 'Ooh, I'm not going to have anywhere to hide it!'"

Though it feels like a lifetime has passed since the show debuted on Hulu, the sophomore premiere episode takes place just two days after BFFs Maya Ishii-Peters and Anna Kone (writer-creators Maya Erskine and Anna Konkle, playing 13-year-old versions of themselves) had their "threesome" with Trailview Middle School heartthrob Brandt (Jonah Beres). With sensitive, impulsive Maya and impressionable, loyal Anna and their distinctly awkward attempts at nailing — but just missing — early-aughts fashion established, Walker enjoyed flexing with more custom-design this time around. That was the case with Maya and Anna's "tankini" swimsuits, partially inspired by her own vivid teenage experiences with the two-piece swimwear. Plus, the silhouette conveniently covered the custom bonding and corsetry needed to "smush and hide" developed adult "bosoms." 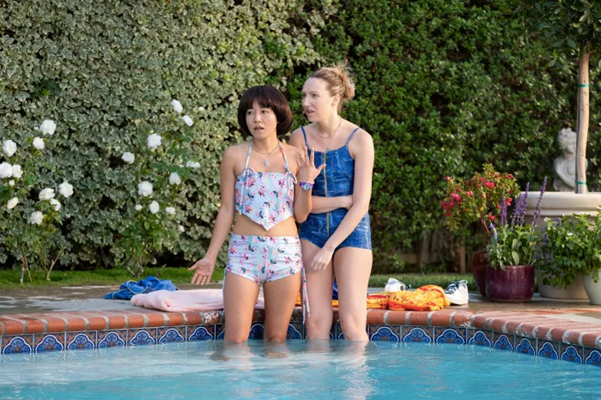 Maya's overly strappy floral handkerchief top and boy-cut shorts were inspired, of course, by a look in a Delia's catalog. Walker opted for the adjustable cinch-ties at the hips, remembering how she'd expand the length when at home to placate her mom.

"Then I'd go to the beach or the pool and hang out with my friends and just jack it up," says Walker, with a big laugh. "It's like, what? Two inches more of my white thighs? What it turned into looking like was a diaper. So it's a very specific memory for me. I was like, 'I'm re-creating this, because it was absolutely a faux pas that I performed myself in middle school: the diaper swimsuit. It just felt right." (And it sounds exactly like something Maya would do.)

Anna coordinates in a weird acid-washed denim-pockets-on-denim print, which Walker first found on a vintage XOXO dress. She then happened upon the same motif in a swimsuit fabric. "I was like, 'Ahhhhhh,'" says Walker, feigning a divine intervention sound. Then, to make the two-piece even more confusing, she added the chunky gold zipper up straight the center.

"Who the hell puts metal on bathing suits? You're in the sun. Those things get hot as shit! The most asinine ever," says Walker. 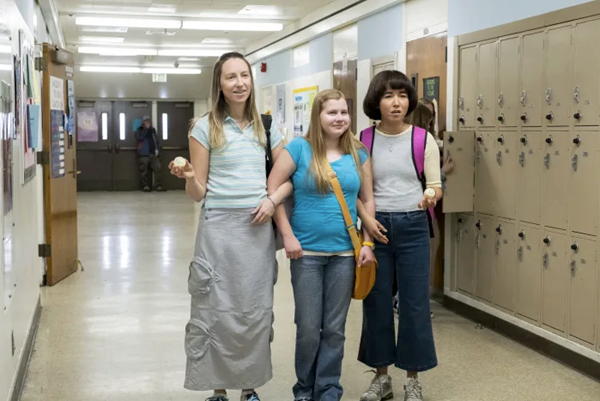 Season two delves more into the girls' fraught relationships with their mothers, especially Anna, who is caught in the middle of her parents' marital issues. Maya — who's mostly raised by her Japanese mother Yuki (played by Erskine's real mom, Mutsuko, who needs an Emmy, stat), while her dad tours with his Steely Dan cover band — still wants to be doted on as a child, and continues to lie to her mom and best friend about getting her period. At Erskine's request, Maya even still wears opaque white "little girls stockings."

But Maya's and Anna's bond is tested with the introduction of Maura (Ashlee Grubbs), who impresses the two with her fancy "McMansion" house, overstocked fridge and designer wardrobe. "I love your pants," says a starstruck Anna, when they first meet. "Thanks," says Maura, always the one-upper. "They're 7 jeans. I hate knockoffs." And, yes, the interloper is indeed wearing 7 For All Mankind jeans with her Limited Too T-shirt.

Walker explains that designer name-drops in the script need to be cleared through legal, so she also amassed a backup stash of early-2000s denim faves, including, Frankie B and Calvin Klein. (Although, many of Maura's bedazzled Guess T-shirts are actually unused looks from Heather's mom's bebe and Armani Exchange baby tee-filled collection from last season.) 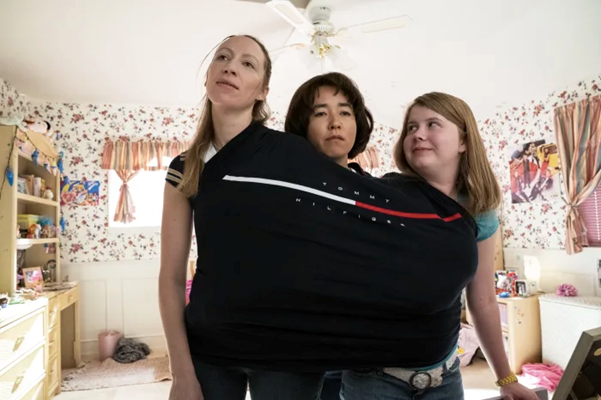 Yuki astutely declares the disrespectful Maura as a bad influence on the girls, from the casual usage of the c-word to her thirst for logomania. On a joint mother-daughter shopping trip, Maya excitedly discovers an oversize Tommy Hilfiger T-shirt, as an incredulous Anna says, "Wait. It's fake."

Walker confirms that not only is it real Tommy, but the brand also made her multiples of the shirt, based off of a vintage tank she found. "Then we went for wrap drinks at a bar and saw some guy in a modern day version of almost the exact same [Tommy Hilfiger] shirt," she adds, with a laugh.

Maura continues to insert herself as a third BFF, while insidiously trying to drive the duo apart by playing into their insecurities. The newbie snidely comments on Maya's mom's "accent" and disparages her clothes. "You have like nothing here, Maya," says Maura, as the three are jammed into one of the aforementioned "Tommy Hil" shirts (above). In turn, Maya and Anna begin morphing into Maura's style — or trying to, anyway.

"A mismanaged version of it," as Walker says. "Especially because they're not from the same socio-economic background, either." 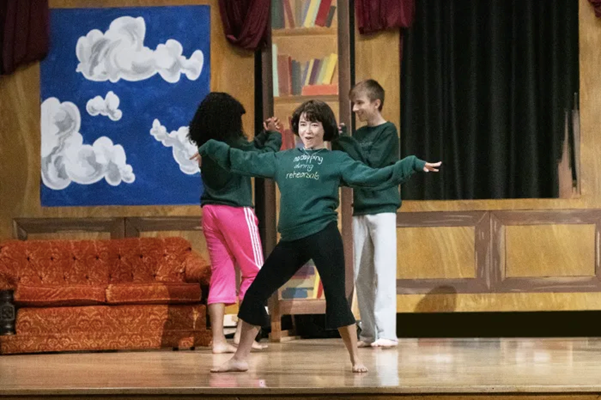 With the second half of season two to come in 2021 (thanks, Covid-19), the seventh episode ends with some emotional cliffhangers, but also heartwarming personal growth moments for Anna and Maya: They both find their talents and confidence in the middle school theater performance of "The Days are Short," an ambitious original play by drama teacher Greg Rosso (Erskine's real-life partner Michael Angarano) that's way too mature for 13 year olds.

Maya channels her intense emotions into the leading role of a wannabe Tennessee Williams-type with a Willy Loman-esque Brooklyn accent. For rehearsals, she goes full-on drama nerd in a DIY fabric painted "no clapping during rehearsals" sweatshirt and an early-aughts take on Audrey Hepburn tap pants.

"Oh my god, I had those in dance class," says Walker. "The little spandex flares with a little weird 'V' at the waist, too."

"It's a specific memory. Don't judge me. I'm not lazy. This actually happened to my friend in a play," she continues. "We had to rig [the pant hems] so that it looked pooled at the bottom. His jacket was so oversized. I was like, 'You look like David Byrne.'"

Anna initially suffers from separation anxiety from Maya, but then embraces her skills and power as a stage manager. She adopts the all-black, utilitarian wear to run the show — while clashing with the talent, especially the leading lady. Konkle also had some thoughts on how to accent Anna's crew uniform, per Walker: "She was like, 'I want to wear this safety pin here.' I was like, 'What if we lined it here? Because that's where I put all my safety pins on my pockets.' She's like, 'No, right here.' 'Well… it might look like a mistake, but it's your call, so let's do it.'"

The "PEN15" creators/stars and Walker continue their collective channelling of very specific adolescent angst and memories into an off-screen creative endeavor. Along with Konkle and Erskine as investors, Walker debuts a limited-edition "PEN15" clothing line today on her newly launched e-commerce site, Land That Look. (The site and its accompanying Instagram will also be a hub for costume designers to sell their future inspired-by lines direct-to-consumer.)

Walker is bringing back Maya's pink corduroy flares, but with a wearable inseam (as opposed to the original's one-inch zipper), plus a full-length pair of board shorts, "little baby tees," a cropped polo and Anna's mom's infamous converted gray cargo skirt (above), but with contrast zippers and updated buttons.

"All my favorites from the Y2K stuff, but made to actually be viable now," explains Walker. "It's a mix between Anna's and Maya's styles — and popular girls'"