Peter Walpole has been working with the Wachowskis for over 15 years. The co-production designer of "The Matrix Resurrections" first collaborated with Lana Wachowski on the film adaptation of Alan Moore's "V for Vendetta." Walpole spent years as a set decorator, helping to create the vast worlds presented in "Speed Racer," "Cloud Atlas," and "Jupiter Ascending." He stepped into the role of production designer for the series finale of "Sense8," and all of that work led to the glorious vision that is "The Matrix Resurrections."

Walpole and Hugh Bateup, another key voice in the Wachowskis' filmography, sought to create a more contemporary Matrix this time around with Lana and the crew. As Walpole told us in a recent interview, using San Francisco, with the city's light and fog, helped create a more natural and less calculated atmosphere for "The Matrix Resurrections."

How did you want to honor the past while also taking the Matrix into the future?

Well, it's interesting, isn't it? I mean, this film was always talked about as a companion piece to the first "Matrix" film. It is a bookending film to the first, rather than any other kind of description. It's in the same genre, but I think it's been advanced in the overall look, if you know what I mean. Maybe the first film was quite stylized in its design, by Owen Patterson, and the way that it was shot. Whereas I think this one is far more free flowing and maybe more contemporary. I think that Lana always had this vision of taking a style that she had established, on the second season of "Sense8," in the way that she shot, to transform that to "The Matrix Resurrections."

It's very poppy, though. A more colorful aesthetic.

Yeah, it's interesting that you refer to it as poppy. I think that could go hand in hand with my feeling of contemporary. We started the conceptual design in San Francisco, right in the middle of The Financial District, collaborating as a team. And Lana wanted for us all to be based in to the heart of where the story's going to start and take place. Taking that inspiration from San Francisco, and the architecture, and the light, and the extraordinary movement of the San Francisco fog, that became the Matrix. Meanwhile, we were obviously designing the real world at the same time. But that was the essence of it, for us to be based in the heart of where the movie was sort of set and written and based.

How about creating the Analyst's world and his office? What was the essence for you there?

I think his world really shouldn't pop out too much. It should be a comfortable setting. Lana had that location in mind, although we did have a look at some other things. We were all a little bit concerned that maybe the exterior looked a little bit too austere, because of its darkness and it was perched on that particular hill. But then when you move inside to the comfortable setting of the Analyst and the way that he discusses things with Thomas Anderson, I think it is all very easy on the eye. There's nothing that really jumps out. It's a good backdrop to their conversation.

What other sets were debated or took more time than usual to decide on?

Well, the unique situation, obviously, is that Hugh and I have worked with Lana many times. My own collaboration with her now stretches to nine projects, going from set decorator to supervising art director and onto production designer. And as you know, I designed the "Sense8" finale. So we had a short circuit way of communication between the three of us. Obviously, there are other designers out there who work with directors all the time, but she's very good at listening and discussing and approaching the whole project as a team between the three of us.

There wasn't one particular set that we particularly agonized over. We went through the normal process of design and selection. Selection being locations, and design being the ones that we built. And it was a very — especially the conceptual period — pleasurable period of creating this wonderful film that carried on from iconic films [from] 20 years ago.

As you know with filmmaking, we always have issues of location availability and time to build sets and everything, but I think there wasn't one that I can pick out. And we had the Covid problem right in the very middle of it, which nobody has experienced before. So on top of the actual filmmaking process, we had this pandemic going on. 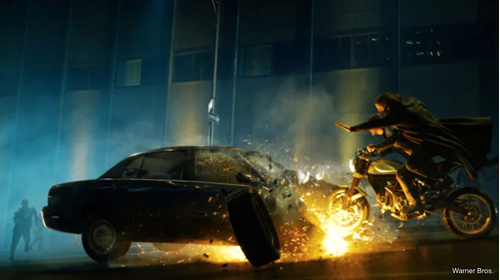 By the way, very seamless work in that it's often hard to tell what was a set and what was a real location.

Well, that's good because some of them were not only locations, but were rebuilt as sets for particular stunt actions or dramatic scenes. Not everything could be done on location in San Francisco. We certainly did some amazing shooting on the streets with helicopters and practical action and explosions and burning cars, et cetera. I'm not sure anybody has done quite as much as she did. I don't think any other film has done quite as much as that on the streets of San Francisco.

That was one of the great things about being there during the early design period, because we could wander down from our offices and discuss where we're going to shoot. We literally could walk out the front door and walk around the block and discuss the last quarter of the film, and the action, and which streets were going to be used for what, and so on and so forth.

I can't even imagine just how elaborate it was putting together that final section of the film.

It was very elaborate. When you're in the eye of the storm, you just get on and do what you have to do. It's only when people tend to look in from the outside, or join us a later date, [they] find it hard to comprehend how it's been organized and how it's put together. Remember when you're making a film, you start from day one. So the early decisions are often running and they just grow.

How about the warehouse? Was that a real location?

Well, that warehouse fight set actually started with a possible location build in San Francisco, but as a build in Berlin. And because of the techniques that she had honed during the "Sense8" shooting, it was a set within a location that she shot as it was. There were no floating walls there, no ceilings came off. It was built. It was there as a structure and shot on as it existed.

How did you and Hugh collaborate together?

I think one of the specific reasons that she brought Hugh and I together on the film was our different talents. Hugh had the experience of the past three films as an art director and his historical content, where with me, I was kind of like the new guy on the block. I have a particular attention to set details from my set decorating days, which she's always enjoyed. So I was the new approach. Obviously she, Hugh, and a few others had worked on the original "Matrix," whereas I was very much a fresh set of eyes.

That's what I've always enjoyed within my work and has taken me from set decorating to production design. Especially when you come to think that we designed Thomas Anderson's apartment, which had never really been done before. And his personal life, and his personal feelings and tastes, and his attributes, I very much enjoyed building his character up within his living environment.

I think that's what Lana enjoys about my aspect of the design team. And the same with the Analyst house and the office of all the details, the books, the pictures, the style of furniture or whatever. It's an important part of my history and how I've become a designer. That's my route, if you know what I mean.

For all those details, are any of them from previous "Matrix" films?

The movie's not loaded with them. I think there's a new phrase within the industry called Easter eggs. I must be honest, I hadn't really heard of up until a couple of years ago. And now everybody talks about the Easter eggs that are planted within the movie. And yeah, I must be honest, I planted a few Easter eggs. But also, there's not that much from the original movie, I have to say. But there are the iconic chairs that are seen in the movie theater. They are the exact same chairs that were used in the original movie.

How about the new society? How'd you want to show it as a progression from Zion?

"The Matrix Resurrections" is now in theaters and on HBO Max.