In her sparkling 2016 debut feature, “Jean of the Joneses,” the Canadian writer-director Stella Meghie gave one of her characters a revealing bit of dialogue: “Sometimes when you don’t know what to do, you do nothing.”

It’s a line that has reverberated through her subsequent movies, including “The Weekend” (2018), a sharply written comedy about a getaway gone sour, and now an uneven but often intoxicatingly lovely romantic drama called “The Photograph.” Meghie’s protagonists are black women, often artistically ambitious and romantically rudderless, and what she grants them is something both simple and remarkably rare in the movies: the luxury of time. She lets them sit back, take a deep breath and do the aforementioned nothing for as long as it takes to figure out what they want from life, work, family and love.

There are two women doing the soul-searching in “The Photograph.” In the first story, set in the mid-’80s, young Christina (Chanté Adams) abruptly leaves her Louisiana hometown to pursue her dream of becoming a photographer. The second, more dominant story takes place in the present day and follows Christina’s only child, Mae (Issa Rae), who works as a curator at a New York art museum. Christina has recently died of cancer, bequeathing her estranged daughter a long, intimate letter and an old black-and-white photograph — both clues to a none-too-complicated mystery of maternal regret that Mae will spend the rest of the movie slowly unraveling.

As she processes her grief, as well as her ambivalence toward a mother who could be distant and inattentive, Mae meets and befriends Michael (Lakeith Stanfield), a magazine reporter who is writing a story on Christina. His research leads him to New Orleans, where he stumbles on an old trove of her work and interviews her ex-boyfriend Isaac (Rob Morgan), a gentle old soul who boils crabs and mourns what might have been. But it is Mae to whom Michael keeps returning, Mae who intrigues and excites him even if the moment isn’t exactly opportune: He’s just gotten out of a relationship and is eyeing a possible job overseas. 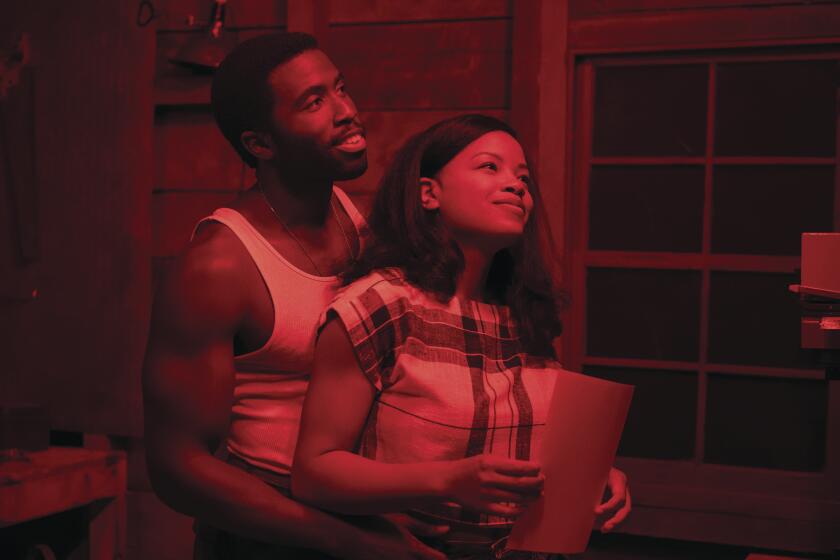 The fact that life doesn’t slow down to accommodate our difficult decisions — new opportunities, new relationships — is all too readily apparent. But the movie’s loveliest scenes seem almost to contradict this simple wisdom, carving out moments in which time briefly stands still for Mae and Michael. The actors fill those moments with slow-simmering chemistry and playful verbal jabs: She’s charmed but slightly guarded; he’s wary of commitment but also clearly smitten. “Insecure” fans used to seeing Rae in comic firecracker mode may take some time to adjust to her more contained dramatic rhythms here, though she and Stanfield, with his sleepy-eyed leading-man charm, quickly find a groove.

“The Photograph” is a movie of seductive, slow-savored pleasures: It’s about the joys of flirting over a glass of whiskey and making love during a hurricane while Al Green croons in the background. Meghie and her cinematographer, Mark Schwartzbard, bring a richly burnished warmth to the interiors and a free-flowing sense of movement to the exteriors, where Mae and Michael are often seen walking, in no particular hurry. They have time to riff and argue, to debate Kanye West and Kendrick Lamar, and to contemplate the future.

Their freedom to do as they please is very much the point. (The silky, jazzy progressions of the score, by the Grammy-winning pianist Robert Glasper, serve the theme nicely.) Meghie has noted movies like “Love Jones” and “Love & Basketball” as personal inspirations, and “The Photograph,” even more than her earlier movies, luxuriates in the spectacle of black characters falling in love on-screen, and in narrative configurations notably devoid of drugs, violence or indeed any overt conflict. The movie is also tonally dexterous enough to accommodate the occasional shifts into broader comedy, much of it courtesy of Michael’s wisecracking family-man brother (Lil Rel Howery, “Get Out”) and his ambitious intern (Kelvin Harrison Jr., in a nicely goofy change of pace).

These moments are so graceful and expansive — you want to wrap them around you like a blanket — that they make the story’s big-picture schematics feel clunkier by comparison. The movie keeps shifting back to ’80s Louisiana, where we see Christina falling in love with a young Isaac (Y’lan Noel), heeding the stern advice of her own mother (Marsha Stephanie Blake) and slowly, determinedly figuring out what she wants to do with her life. New Orleans, with its heat and jazz and clapboard houses, provides a welcome atmospheric contrast with New York, and Adams, so electrifying in the indie hip-hop biopic “Roxanne Roxanne,” is terrific here in a more tamped-down role.

You wish there were more of her, frankly, and also that the story had achieved a more exquisite balance between its parallel tracks. As it is, the juxtaposition of time frames can’t help but put the narrative in a reductive bind. It’s only a matter of time before Mae absorbs the lessons of the past, and before “The Photograph,” a movie that makes a surprising virtue of uncertainty, arrives at its own foregone conclusion. You almost wish the characters could go on beautifully doing nothing forever.