Headlines
Previous
KNIVES OUT, Lensed by Steve Yedlin ASC, Ranks No. 18 On 2019 Most Valuable Blockbuster Tournament
Next

When it comes to evaluating the financial performance of top movies, it isn’t about what a film grosses at the box office. The true tale is told when production budgets, P&A, talent participations and other costs collide with box office grosses and ancillary revenues from VOD to DVD and TV. To get close to that mysterious end of the equation, Deadline is repeating our Most Valuable Blockbuster tournament for 2019, using data culled by seasoned and trusted sources.

Rian Johnson was yearning to do a whodunit in the spirit of the Agatha Christie ensembles he grew up with, and while Knives Out had been in the planning stages for about a decade, Johnson began writing quickly once he finished Star Wars: The Last Jedi in January 2018. Media Rights Capital boarded as financier of the $40 million production six weeks before filming began, with Lionsgate winning out as distributor soon after. Knives Out came together very quickly as star Daniel Craig, who was cast as Southern-drawled sleuth Benoit Blanc, had a small window before his 007 commitment No Time to Die. Johnson had a sense that the Bond actor was looking to cut loose and play, after seeing him on SNL and Steven Soderbergh’s Logan Lucky, in which Craig also played a Southerner. The ensemble cast of Chris Evans, Jamie Lee Curtis, Michael Shannon, Toni Collette and Ana de Armas soon boarded, and cameras rolled for seven weeks outside of Boston, with production completed by the end of 2018. The film tested so well for Lionsgate, the studio decided to launch it out of Toronto three months before the pic’s Thanksgiving opening, where it served as mass-moviegoer counterprogramming to Disney’s family giant Frozen 2 at that time.

Here are the costs and revenues as our experts see them: 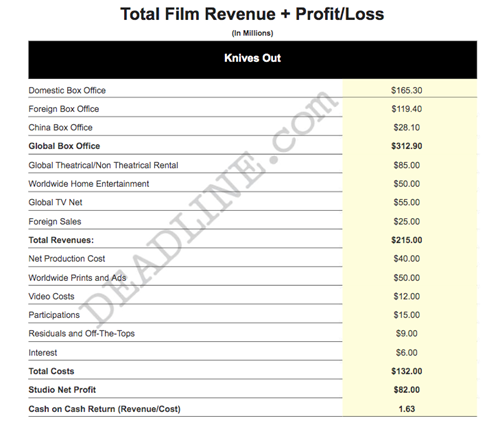 Knives Out wound up being the second highest-grossing original movie not based on previous IP, at the 2019 domestic box office with $165.3M, behind Jordan Peele’s Us ($175M) and beating Quentin Tarantino’s Once Upon a Time in Hollywood ($142.5M). Repeat business was in store for Knives Out given all the additional details that moviegoers kept learning about in each viewing. The pic remained in wide release (north of 1,000 theaters) for 12 weeks, longer than Disney’s Star Wars: The Rise of Skywalker which stayed wide for only eight weeks. MRC and Lionsgate split the $40M production cost at 50-50, with the latter taking advantage of foreign output deals that delivered $25M toward the bottom line. P&A of $50M was largely for the U.S. and Canada as foreign was sold off. Participations of $15M are estimated for Johnson, Bergman, Craig and the ensemble cast. After $215M in revenues against $132M in total costs, Knives Out saw a net $83M profit, again, split between Lionsgate and MRC. A sequel starring Craig’s Blanc is already in the works from Johnson.