The lies begin piling up early in “Knives Out,” Rian Johnson’s magnificently crafted tale of murder and mayhem. Someone has slit the throat of Harlan Thrombey (Christopher Plummer), the 85-year-old patriarch of a family with deep pockets and an even deeper capacity for duplicity. His son-in-law, Richard (Don Johnson), is hiding an extramarital affair. His daughter-in-law, Joni (Toni Collette), has been secretly dipping into his fortune for years. But few lies are crueler, or less convincing, than the five little words we hear spoken near the beginning: “You’re part of this family.”

The brave young woman on the receiving end of that lie is Marta Cabrera (the superb Cuban actress Ana de Armas), Harlan’s nurse and, by all appearances, his one true friend. She’s the only person who’s genuinely heartbroken over the old man’s death, which makes it all the more bewildering that, cheap sentiments aside, none of his relatives thought to invite her to the funeral. Maybe they felt shamed by her decency. Or maybe it was just their latest mindless dismissal of Marta, who immigrated to the U.S. from a Latin American country (their inability to remember which one becomes a brutal running gag) and is treated more like a domestic servant than a member of the family.

And so there’s an undeniable justice to the way Marta turns amateur sleuth, reluctantly enlisted by the famed private investigator Benoit Blanc (Daniel Craig, a very choice ham). Harlan may be dead, but it is his family’s moral obliviousness, their obscene wealth and monstrous privilege, that Johnson keeps eviscerating in this extravagantly entertaining movie. Even among the many class-conscious dramas that have flooded theaters this season (“Parasite,” “Hustlers” and “Joker” come to mind), there is something particularly decadent about the eat-the-rich buffet that “Knives Out” serves up. To watch as the Thrombeys tear themselves apart is to experience a wave of schadenfreude so heady and intoxicating that the revelations of whodunit and why almost feel like third-act bonuses.

Happily, those revelations were clearly not an afterthought for Johnson, a pop-savvy, detail-driven filmmaker whose fondness for crime fiction has been in evidence since his 2005 high-school noir pastiche, “Brick.” Twisty, rug-pulling plot construction is one of his strengths as a filmmaker; it may also explain why his splendid contribution to the ever-expanding yet rigidly fan-policed "Star Wars" universe was so ill received in some quarters. In that picture, as in his 2012 time-travel fantasy, “Looper,” Johnson revels in the kind of labyrinthine storytelling that feels increasingly like a lost Hollywood art, a relic from a time when the studios produced fewer spoiler warnings and more actual surprises. And so while “Knives Out” may superficially resemble an archly knowing spoof of Agatha Christie, the truth is that few spoofs demonstrate such consummate cleverness, such moment-to-moment mastery of the conventions they’re satirizing. This is, to be sure, a riotously funny movie — a priceless collection of puns, insults, one-liners and some of the best-timed barf gags this side of “Problem Child 2” — but it also treats the classical detective story with the seriousness and grandeur it deserves.

Johnson revels in the old-school tropes of the genre: the juggling of time frames, the withholding of information, the reading of a will, the brandishing of blades and syringes. He can’t resist drawing out the piercing scream of the housekeeper, Fran (Edi Patterson), who discovers Harlan’s bloodied body, or stuffing some genial banter into the mouths of the police detectives (Lakeith Stanfield and a very funny Noah Segan) who are called to the crime scene. Sleuths and suspects all convene at the ramshackle Thrombey estate, a thing of glittering, shadowy beauty in Steve Yedlin’s sharp cinematography and David Crank’s production design. (Best detail: a prize collection of vintage daggers arranged in a circular target formation, like a j’accuse! by way of the Iron Throne.)

Harlan was a celebrated mystery novelist, and his murder turns out to have a fiendish complexity worthy of his own bestsellers. With elegance and economy, “Knives Out” carefully lines up its circle of suspects, nearly all of whom are delightfully loathsome and amply motivated to bump the old man off. There’s the philandering Richard and the thieving Joni, a social-media influencer with her own Goop-inspired lifestyle brand, and also Harlan’s Fredo Corleone-esque son, Walt (Michael Shannon), who until recently oversaw his father’s lucrative publishing empire.

Like his vituperous older sister, Linda (a splendid Jamie Lee Curtis), Walt is a self-flattering but fundamentally useless person, someone who has thrived entirely on Harlan’s generosity. The same goes for Linda and Richard’s son, Ransom (a wily Chris Evans), an impudent black sheep who nonetheless enjoyed a peculiar love-hate relationship with his grandfather. And then there are Joni’s liberal-minded daughter (Katherine Langford) and Walt’s alt-right-leaning son (Jaeden Martell), the youngest and most politically energized members of a clan that likes to squabble over illegal immigration, parent-child separations and other Trump-era talking points. 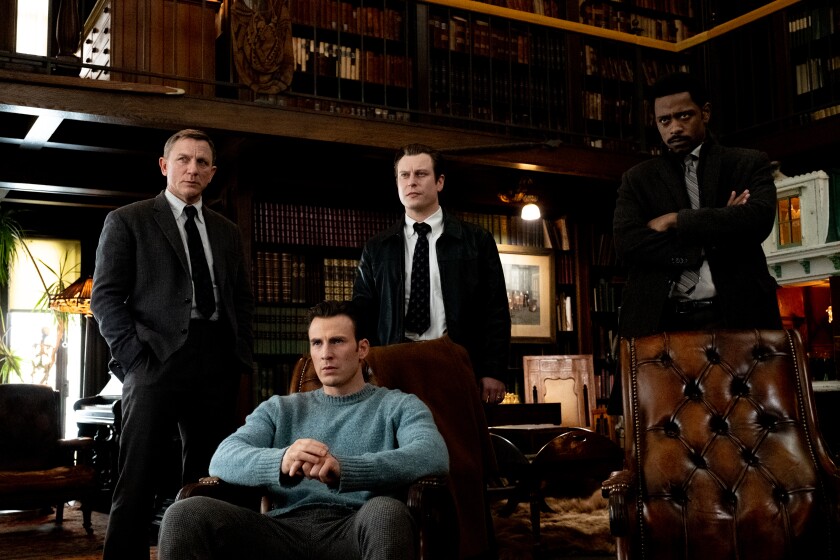 While it doesn’t take much detective work to figure out where “Knives Out’s” own political sympathies lie, the movie’s larger point is that, when a dynasty is this corrupt, this mired in narcissism and nepotism, those individual leanings become entirely irrelevant. To paraphrase some of Johnson’s snarkier dialogue, extreme greed has a way of uniting conservative trolls and liberal snowflakes alike. And so as delectable as all this family squabbling is, only a few of the Thrombeys emerge as more than cardboard constructs (albeit very amusing ones). It’s no accident that the one who will eventually outshine them all happens to be the kindest and least financially privileged character in the movie.

I’m not talking about Blanc, although Craig is irresistible as this Southern-gentleman detective, with his courtly manners and flamboyant drawl; he’s like James Bond gone to tweed. But while Blanc comes across as a genially bumbling figure at first (one suspect calls him Foghorn Leghorn), he’s shrewd enough to recognize a valuable ally in Marta, whose evolution from guileless outsider to commanding truth teller is one of the story’s most bracing developments. The Thrombeys may write Marta off as someone of no consequence, but the movie knows better. So, too, did Harlan, movingly played by Plummer in extended flashbacks that allow him to hover over the proceedings like a watchful, benevolent ghost.

The name Harlan Thrombey comes from an old “Choose Your Own Adventure” paperback called “Who Killed Harlowe Thrombey?” It’s one of the movie’s countless reference points, some of which Johnson explicitly acknowledges: He’ll throw in a “Clue” name-drop here, a “Murder, She Wrote” cutaway there. I can personally pay “Knives Out” no higher compliment than to say that, with its boisterous comic high jinks and airtight plotting, the movie reminded me less of Agatha Christie than of John Dickson Carr, one of the greatest and funniest of Golden Age detective novelists.

Christie, Carr and their ilk were often lumped into the somewhat derogatory category of the “cozy,” that reassuring mystery subgenre in which every pesky bloodstain can be wiped away and every murder can be neatly solved from an armchair. “Knives Out” doesn’t try to transcend the pleasures of the cozy; it wouldn’t be half as delightful if it did. But it does weaponize those pleasures in ways you may not be expecting. Marta’s dogged pursuit of justice, for Harlan and ultimately for herself, builds to what may be the most satisfying closing shot I’ve seen this year. Rarely has “kill ’em with kindness” taken on such radical new meaning.