By Harper Lambert, The Wrap

“The story is ultimately about artists creating art during a pandemic, and that’s what we were doing,” the three-time Emmy nominee told TheWrap 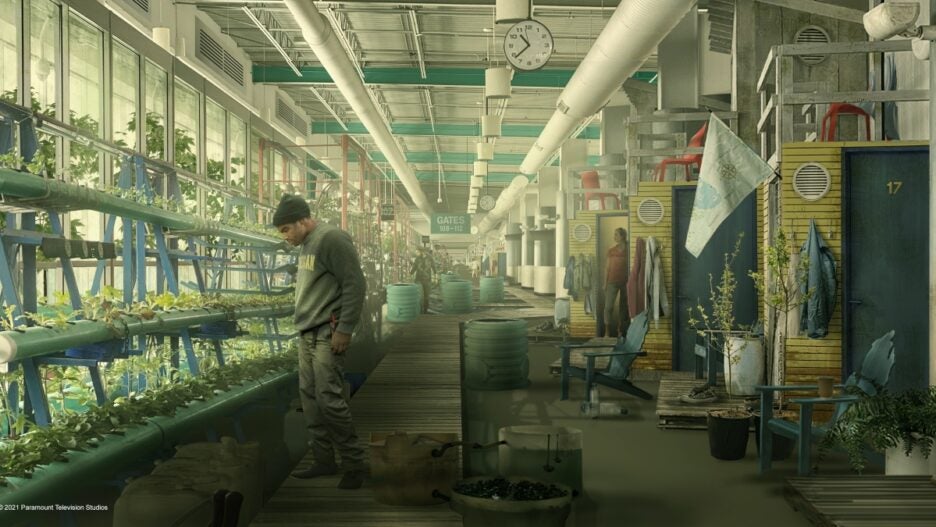 If the human race were to go extinct today, what would the world look like tomorrow? In a few months? In 20 years?

The apocalypse question has given rise to a whole subgenre of television, which tends to frame it one of two ways. Stories are either forged from the wreckage of disaster-stricken cities (“The Walking Dead,” “The Stand,” “Y: The Last Man”) or set in some distant future, lightyears away from the initial cataclysm (“12 Monkeys,” “The 100”).

“Station Eleven,” the HBO Max series based on Emily St. John Mandel’s 2014 novel, poses a simpler alternative: what if the apocalypse was just a giant reset button?

That framing – the way it collapses beginnings and endings, loss and possibility, life and death – informs every aspect of the 10-part miniseries, not least of all how it looks.

Production designer Ruth Ammon was in Budapest, scouting locations for another project, when she began working out her artistic approach. Taking bits and pieces from Mandel’s book, the “visual poetry” of showrunner Patrick Somerville’s scripts, and her own imagination, Ammon’s vision for “Station Eleven” didn’t share much DNA with its dystopian siblings.

“It was a world where the future wasn’t drab and miserable and horrible; the future was verdant, the future was green,” said the three-time Emmy nominee, whose recent work includes “Heroes” and “The Alienist.”

“There was something hopeful and whimsical and kind of positive that we wanted to show.” 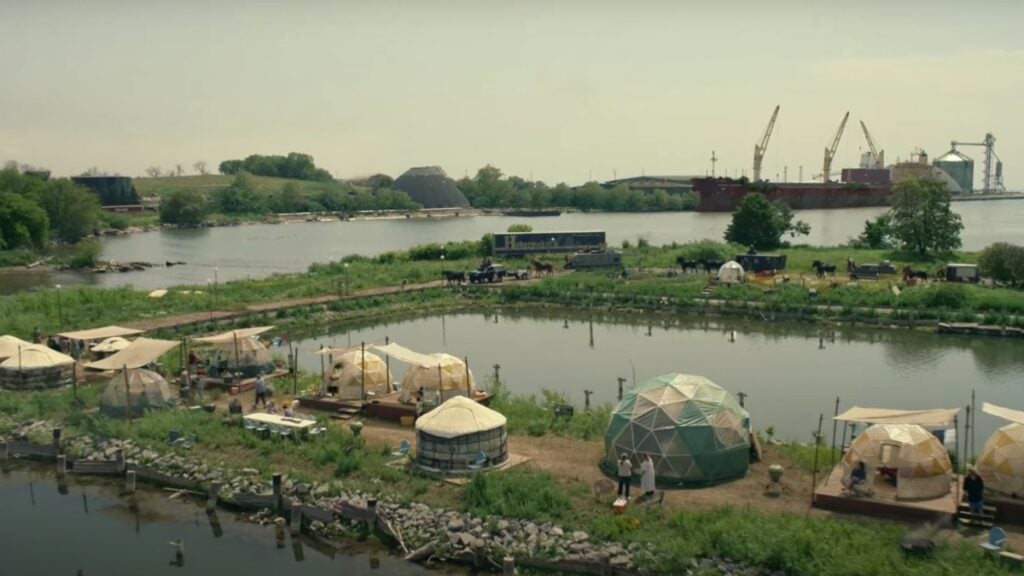 That might sound odd, considering that “Station Eleven” is about a highly contagious flu that wipes out 99% of the human population. But the show is equally, if not more focused on a web of interconnected survivors who, 20 years later, have built a new world out of the vestiges of the old one.

In that sense, while much of “Station Eleven” takes place in the future, it isn’t futuristic.

“Let’s put it [this] way: we didn’t want to see falling bricks [or] broken glass,” said Ammon. “We just wanted it to be as if the world had stopped.”

Since most of the early pandemic sequences take place in Chicago, the effect of this is staggering. Overnight, America’s third-largest city goes from bustling metropolis to ghost town, its vacant skyscrapers and shopping malls the only proof that 2.7 million people used to live there.

For Year 1 (the first year after the flu outbreak), Ammon drew inspiration from a place where this actually happened: Fukushima, the Japanese city that was abandoned in the wake of a nuclear disaster in 2011. Specifically, she looked at Yasusuke Ota’s photography series “The Abandoned Animals of Fukushima,” which includes a shot of cows loitering outside of stores and one of an ostrich strolling down a street. 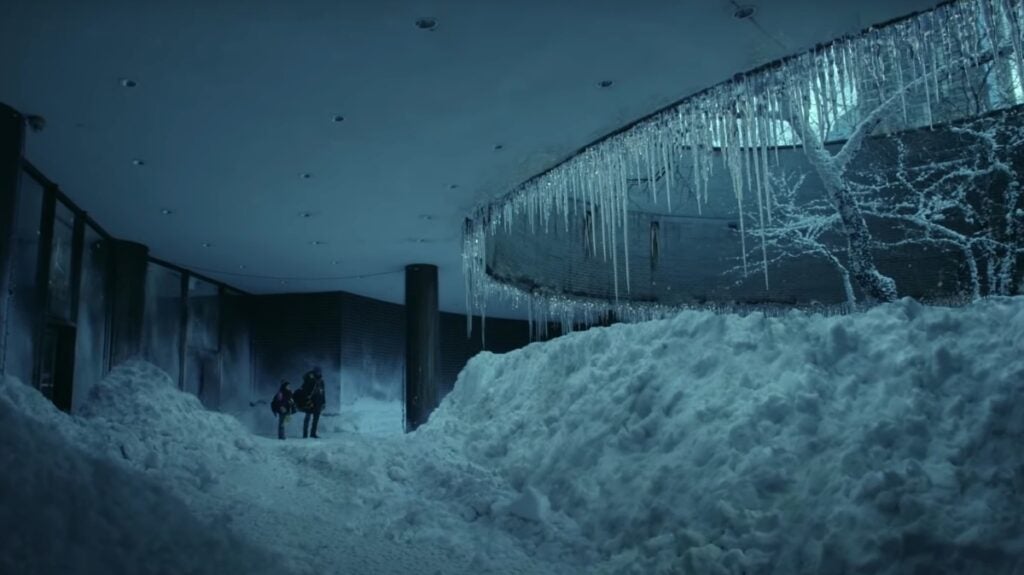 “With a suburban street with a million houses, or a shopping mall with too much stuff, you never really get the message because you’re getting caught up in lots of details,” she explained. “I felt, along with [Somerville], that it was more important to have isolated, whimsical landscape sculptures.”

Ammon’s “landscape sculptures” derive from things like gas stations and billboards, everyday architecture that loses its original functions in a post-apocalyptic world.

“These giant structures [would become] useless, and then they become something else,” she said. “And they don’t become derelict, they become beautiful.”

Take, for example, the deconstructed airplane that gets turned into a zen garden, or the 20-foot, three-dimensional fast food chicken bucket that some characters hide in during a rainstorm.

Those outdoor spaces are the backbone of “Station Eleven”s production design, but they’re hardly the only locations. In addition to Chicago and its surrounding areas, parts of the story take place in Michigan, Los Angeles, and Malaysia.

To bring these settings to life, Ammon and her team drove around for hours, checking out places they’d seen in photos and happening upon others by chance.

“Location scouting is really the start of forming an idea and a possibility of what the world can be,” she said. “Sometimes it’s very specific in the script and other times, you can adjust it.”

An old quarry provided the backdrop for the town of Pingtree, while a conference center in Chicago became the Malaysian hotel where the character Miranda is staying when the pandemic hits.

Other sets called for creative solutions, like printing 3D snow out of styrofoam or building a tropical beach in the middle of Chicago. “You kind of combine what is possible and what you find,” she noted.

One of the show’s most ambitious set pieces is the Severn City Airport, where a large chunk of the action unfolds. When the pandemic hits, a Chicago-bound plane gets diverted to the mid-sized Michigan airport; over the next two decades, the passengers turn it into a miniature suburbia, complete with gift shops that house families and a Museum of Civilization that houses their lifeless iPhones and Nintendo Switches.

Since no one airport could accommodate all of that, Ammon and co. designed “a jigsaw puzzle” out of three or four buildings that were miles apart.

“Our starting point was a small disused terminal at [Toronto] Pearson Airport. It was all boarded up, and there were no shops in there,” so they had to build it from the inside out.

For the sake of regional specificity, Ammon modeled all of the shops on real local businesses: Halo Burger, Mr. Pretzel, Silver Harbor Brewing Company, and Original Mackinac Island Fudge, to name a few.

“What that allowed us to do was to flip those shops [for the Year 20 versions],” she said. “If you create the original, then it’s easier to turn it around, because you have those materials and you can plan [the transformation] in stages.”

For the Atrium, a rounded indoor space where the airport dwellers often gather, Ammon selected the Ontario Science Center, a brutalist building designed by Raymond Moriyama in the 1960s. A two-story soundstage held the control tower-turned-Museum of Civilization, while a defunct airport an hour south of Toronto supplied the grown-over runways bordering the zen garden. Put it all together, and you have a complete airport.

“That was incredibly fun, and incredibly difficult,” Ammon recalled, adding with a laugh, “I’m exhausted just talking about it.”

“Station Eleven”s other set pièce de résistance is the series’ very first shot. The pilot, directed by executive producer Hiro Murai, opens with the interior of a theater cloaked in greenery so dense it almost appears to be underwater. Wild pigs roam through the rows, the outlines of seats barely visible under the flora blooming from every surface.

Rather than rely on visual effects, Ammon and her team carted in “truckloads and truckloads” of real and synthetic plants. “We needed the baby version, the mid version, the big version of all those [plants] to make it a truthful rewilding, and not just a kind of fabulous, crazy overgrowth,” she said.

“Because [Chicago’s Auditorium Theatre, where they shot the scene] is historic, we had to cover all the seats with fabric [sleeves] that we dyed and added moss to.”

No set better conveys the promise and the heartbreak of the post-apocalypse than this one, a beautiful new world that humans will never live to see. But just like the landscape sculptures and the airport, this design is rooted in present reality.

About a decade ago, Ammon was in Detroit, working on the production design for “Low Winter Sun.” While there, she photographed homes that had been abandoned in the midst of post-WWII “white flight” and subsequently reclaimed by nature.

“I planted myself in a neighborhood very specifically to be able to go on my bicycle and explore these derelict buildings,” she remembered. “A lot of them were incredible Victorian architecture that had trees and plants growing out of them, and also birds and butterflies. So it was [an environment] that I had actually experienced myself.” 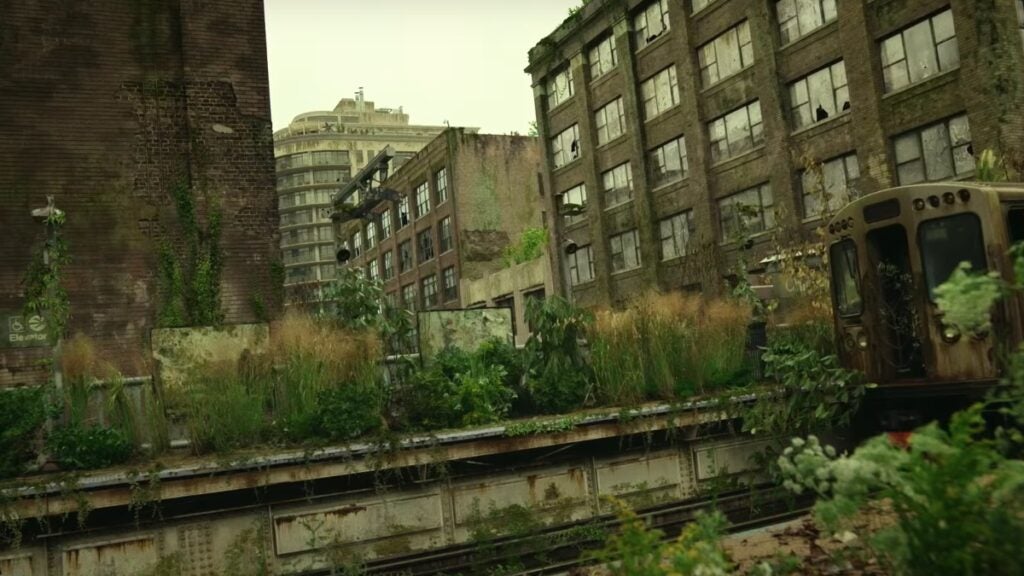 There was one thing, however, that none of her past experiences helped prepare her for: the fact that reality was about to mirror the one she was creating for “Station Eleven.”

Filming had begun in Chicago when Ammon heard the term COVID-19 for the first time. “‘Haha, isn’t that weird?’” she called out to Murai in the office across from her. “And then our first AD [Jennifer Wilkinson] sent a text out to all of us saying, ‘Hey, guys, isn’t this funny?’”

That was in December 2019. Before long, Ammon was working in complete isolation, as she never had before.

“I felt like we had envisioned this world before it happened, but that only kind of supported it in this really weird way,” she continued. “The story is ultimately about artists creating art during a pandemic, and that’s what we were doing, so we were living very parallel lives.”

Admittedly, the loneliness and solitude Ammon felt during the two years she spent working on “Station Eleven” made watching the series difficult for her.

Still, she said she considers herself lucky to have been part of something that reflected her experience in a meaningful way.

As the lead artist of “Station Eleven” – and its poignant, hopeful vision of the future – it’s fitting that Ammon looks back on the experience of making it from a similar perspective.

“It was the hardest job in my life,” she said, “and it was the most magical.”