All great road trips are about discovering the unknown. Costumer Designer Kathleen Felix-Hager came into Season 2 of “Hacks” with the fashion of the show’s intergenerational comedy counterparts Deborah Vance (Jean Smart) and Ava (Hannah Einbinder) more or less set. But by Deborah taking her new, more personal act on tour and leaving the control (and countless closets) of her Vegas mansion behind, Felix-Hager had the chance to explore who Deborah was and how she presented herself when she could no longer hold tastefully sequined court on her Vegas mountaintop, but had to climb the proverbial mountain instead.

The show has a lot of fun building environments and the characters’ corresponding looks out of the sheer space and variety found in the continental United States – its leads find themselves everywhere from sultry dive bars to the inside of a dumpster – but one of the true joys of “Hacks” is seeing the ways in which Deborah and Ava feed off each other’s impressive comedy chops, even while they can drive each other crazy. Felix-Hager reflects this push-pull in their clothing, too. If you look closely, the scenes where Deborah is taking something from Ava, or vice versa, stand out by the sartorial choices that subtly pull these women closer toward each other.

They start out, it must be said, pretty fair apart. Felix-Hager describes Deborah’s aesthetic as, first and foremost, one of a collector. “She was a collector of little tchotchkes and little salt shakers [in Season 1], but also clothes. She has vast closets of every single piece that she’s ever worn on stage,” Felix-Hager said. “I think she has beloved pieces from different decades and she continues to pull out pieces that she loves… Deborah Vance walks to her own tune as far as fashion, but also she knows what looks good on her. And I feel like it gave her sort of a sense of authority and confidence on stage.”

Felix-Hager also tracks particular items that Deborah loves, such as the fur coat she wears several times throughout the series. It’s both a suit of hirsute armor for her to impose her status everywhere from a funeral to the Grand Canyon, and also a beloved comfort object that Deborah will throw on over pajamas, according to Felix-Hager. “I do definitely have [a backstory for Deborah’s fashion choices],” Felix-Hager said. “We do see pieces that she repeats in her personal life that feel comforting to her.”

With Ava, the challenge is not one of wide breadth but minute range. Felix-Hager described Ava’s style as “a Los Feliz vibe,” all consciously casual jeans and too-cool t-shirts and tops. “Even though it’s a comedy, there’s so much heart and emotion in the series that it’s really important to keep the costumes grounded in reality. I really want to be able to believe that the pieces that Ava has [are ones that] she can afford to buy and that they make sense for her to be in her closet.” Or, in the case of a long stretch of Season 2, her backpack.

Ava packed for Vegas not sure how much time she’d actually spend there, but her wardrobe is even more limited in Season 2. Felix-Hager had to ensure the pieces she did select purposefully communicated Ava’s drive to be cool, and the way in which that drive subtly shifts over the course of the season as she moves from trying to escape Deborah’s legal hold on her career to trying to put her own career on hold in order to be there for Deborah. “I take a lot from our showrunners, [Lucia Aniello, Paul W. Downs, and Jen Statsky], their personal style. They’re sort of very cool, hip LA writers and Ava is that,” Felix-Hager said. “There’s a little cropped navy jacket that [Ava] wears. It’s actually a Prada jacket that I found at a vintage store. So it makes sense for me that she would have that jacket because she probably splurged a little bit for it.” 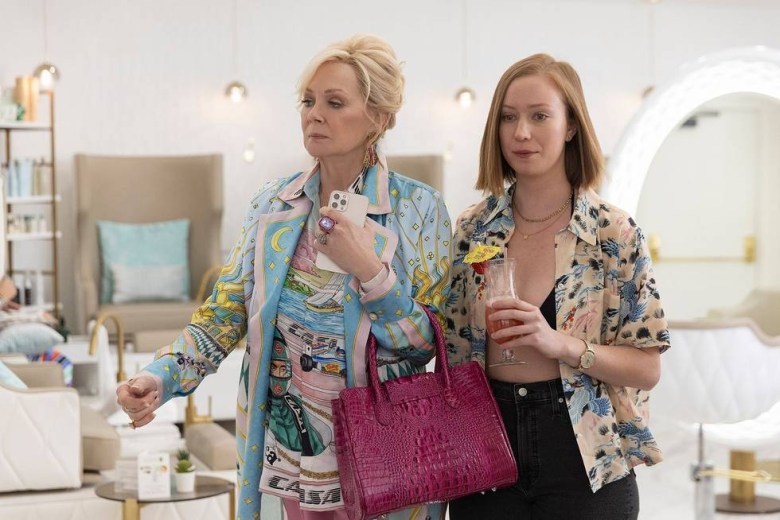 The show moving between spaces where one, the other, or neither of its two leads is comfortable is one of the pleasures of “Hacks” leaving Los Vegas. Episode 4, “The Captain’s Wife,” stands out as a highlight, as Deborah and Ava find themselves doing a show on a cruise for lesbians, Deborah’s demographic kryptonite. It’s not hard to see why, as Felix-Hager only had one camp shirt and a bikini top for Ava, but they make her look far more at home than Deborah’s prepared cruise-wear. Still, it’s one of the opportunities the season had to let Deborah shift into a different gear of fabulous.

“I mean, Deborah Vance and cruise wear is delicious candy. It gave me an opportunity to put all these fabulous hats on her,” Felix-Hager said. “We paid really special attention to all those women on that cruise ship to give them their own individual sort of vibe and collectively make them look like real people.”

In the very next episode, “Retired,” Felix-Hager swings the look of real people in a new direction, getting to dress crowds at a state fair and also Deborah’s old comedy rival/friend, Susan (Harriet Sansom Harris).  Here the difference between Deborah’s slightly gussied up denim and Susan’s sensible jacket tell a story about what comedy has given and taken from both of them, in addition to reinforcing Deborah’s guilt. But it’s also the episode where the showrunners and Felix-Hager start an important clock that pays off in the finale. 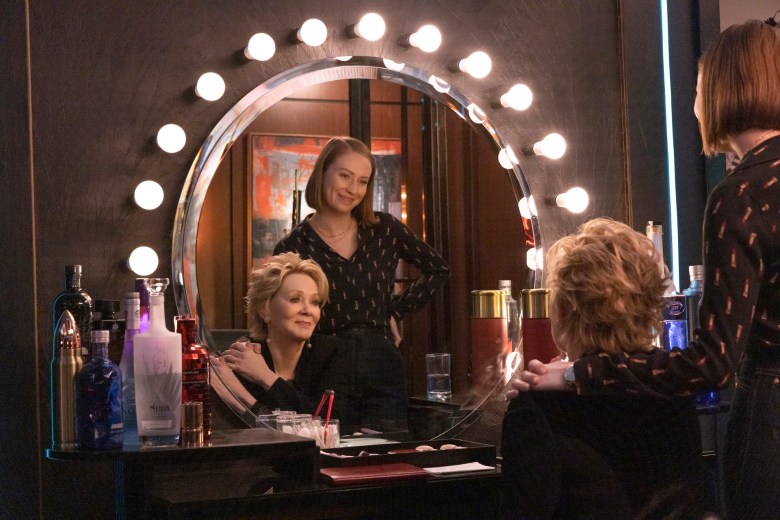 Deborah buys Ava some clothes in Episode 5, ones much closer to her own sense of style and presentation. As Ava finds that doing comedy with and for Deborah is increasingly alluring, those pieces start to crop up in her wardrobe. She wears a green silk blouse to talk to lawyer Jill (Jessica Chaffin) and her comedy-curious son Bobby (Charlie Korman). When Ava surprises Deborah by showing up at the taping of her special, she does so in a dress and the loafers that Deborah bought for her. “To me, it was like Ava’s offering herself up on a platter to Deborah saying like, ‘Here, I’m gonna give you the most ideal version of what I think you want me to be.'” Felix-Hager said. “So it’s even more heartbreaking that she’s in that little dress and Deborah’s like, ‘I love you, but you gotta go.'”