Michelle Obama is coming to dinner! Obviously, the best-dressed family on television would bring their sartorial A-game, thanks to nine-time Emmy nominee Michelle Cole — earning her fifth nom for her work on the final season of the Kenya Barris-created sitcom.

While hosting the 44th first lady (playing herself), the Johnsons invited the laughs, too — especially after physician Rainbow (Tracee Ellis Ross) and advertising exec Dre (Anthony Anderson) exclude the kids and grandparents from the occasion. “I love how they’re plotting to figure out how to see her,” says Cole, who collaborated via top-secret Zooms with Obama’s stylist, Meredith Koop, on her vibrantly cozy JW Anderson sweater. “It’s a casual dinner for her, but everybody else was over-the-top.”

Dre’s pumpkin-hued velvet smoking jacket by Etro, over a black turtleneck, signals his professional success and accompanying pay bump. “He’s dressed up for his wife, and he’s doing it for Michelle Obama,” says Cole. 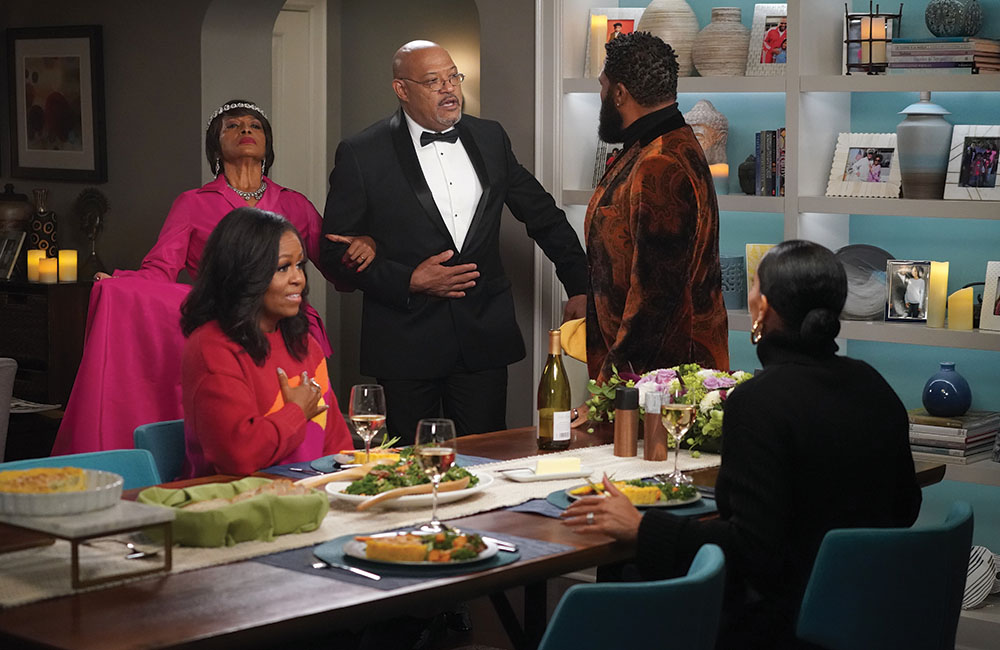 For former first lady Michelle Obama, dinner with the Johnsons is a casual affair — while Black-ish’s family is dressed for royalty. COURTESY OF RICHARD CARTWRIGHT/ABC

As the three settle in for dinner, Junior (Marcus Scribner), in a graphic-patterned Dries Van Noten sweater, unsubtly attempts a photo with Obama. Then, college grad Zoey (Yara Shahidi) saunters across the room in a too-chic-for-doing-laundry lavender and python-print set by Alessandra Rich under the guise of a performing the chore — only to inquire about gifting samples from her upstart fashion line to the ultimate influencers, Sasha and Malia. “She’s carrying the laundry basket with her gold boots on,” says Cole with a laugh.

Dre’s parents, Ruby (Jenifer Lewis) and Pops (Laurence Fishburne), also dress for American royalty. Cole imagines Pop dusted off a tuxedo “that he’s had forever,” while Ruby curtseys in a majestic fuchsia designer gown, bedecked with sparkling rhinestone jewelry — and a tiara. “Where did they get the crown?” asks Cole, surmising Ruby would have repurposed youngest granddaughter Diane’s (Marsai Martin) discarded toy costume jewelry. “Maybe Diane had some stuff in her hope chest.”

For Cole, colorful fashion plays an integral role in portraying three generations of a successful Black family living the American dream in L.A. “This is what we represent,” she says. “This is who we are. This is how we dress.”

Deborah Vance (Jean Smart) and her Gen Z writer Ava (Hannah Einbinder) take her refreshed stand-up act on tour — hitting the road and the high seas. “Deborah Vance going on a cruise was just like candy to me,” says Kathleen Felix-Hager, who earned her second Emmy nom.

Expecting a gay-men cruise, Deborah makes her grand entrance in an on-theme pastel blouse and duster by Casablanca, featuring a distinctive sailing and racing print. Her custom-built wide-brim pink hat — with matching trim snipped off the robe — complete the commanding ensemble. “How else will Deborah Vance walk onto a cruise ship? She’s got to look amazing. It’s got to be like, ‘I’m here for all of my people!’ ” says Felix-Hager. “And then she finds out they’re actually not her people.”

That’s because Deborah’s business manager has booked her on a lesbian cruise, and she must endear herself to an audience she’s historically insulted. Making headway, Deborah confidently sports a bright orange floral-print blouse with brash silver sequins on the forearms. “Deborah still wants to be the center of attention, even though it’s the breakfast buffet,” says Felix-Hager. “She still has a little bit of her Vegas flair.” 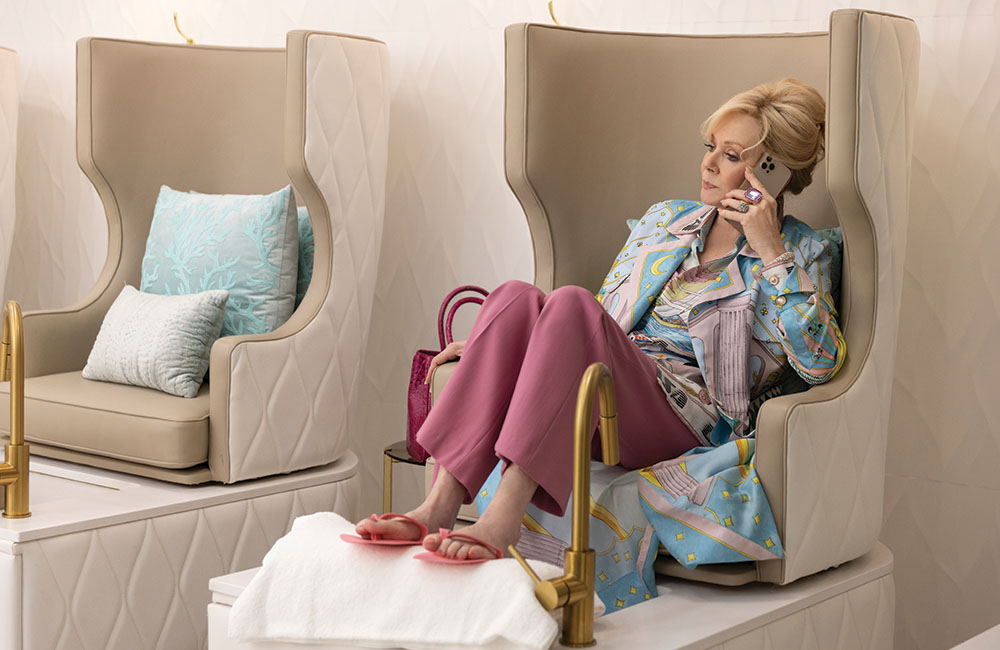 When Deborah Vance unexpectedly books a gig on a lesbian cruise, she makes a point to stand out, bringing her Vegas fashions to the high seas. COURTESY OF KAREN BALLARD/HBO MAX

Deborah is unceremoniously kicked off the cruise. “I knew that they were going to end up in a dinghy, and I wanted a color that would pop out in the ocean,” says Felix-Hager about Deborah’s striking red, pink and navy blouse by La DoubleJ, accessorized by a tactical orange life jacket and a vintage scarlet hat with delicate ruffling. “It’s just so beautiful, chic and kind of ridiculous,” she adds with a laugh.

Only Murders in the Building (Hulu)

First-time nominee Dana Covarrubias fondly recalls her initial fitting with Martin Short for the Upper West Side-set mystery series. As Oliver Putnam, the comedy legend introduces his character’s signature “showman-esque” style via a scripted line. “Really?! Do you not see this coat?!” yells Oliver as a driver nearly hits the former Broadway producer as he’s crossing on red.

Oliver’s statement outerwear was written as a shaggy “bergamasco dog style coat,” explains Covarrubias. But due to collaborative discussions with Short (and the now-famous marigold faux fur of fellow amateur detective and true-crime podcaster Mabel Mora, played by Selena Gomez), Oliver’s coat evolved into the tailored, amethyst-hued Haider Ackermann. “Marty is the comedian,” says Covarrubias. “He’s the one that should be making the joke, not necessarily the costume.” 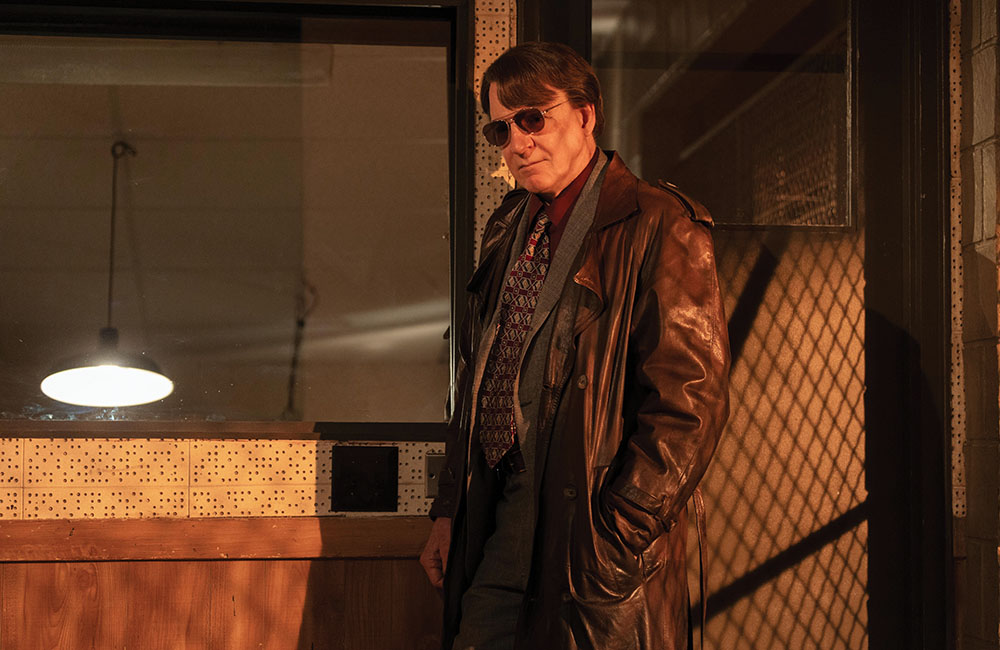 The over-the-top personalities of Only Murders in the Building’s septuagenarians are heightened by their brash and bold wardrobe choices. COURTESY OF CRAIG BLANKENHORN/HULU

Oliver’s purple-and-white polka dot Turnbull & Asser scarf also set the tone for his dramatic wardrobe full of early-2000s designer jackets, vests and neckwear harking to his showbiz heyday producing the likes of Splash! The Musical and Newark! Newark! “We found such a great theatrical look for him,” says Covarrubias. “Marty is so expressive and gestures a bunch, and the scarf moves with him.”

Completing the sleuthing trio, Charles-Haden Savage (Steve Martin) sports a navy palette and short-brimmed fedora that express his professional prime as the star of the ’90s police drama Brazzos. Covarrubias took inspiration from cop shows of that era to find a vintage leather trench for a throwback scene from the bayou-set show-within-a-show. “We wanted to create a really strong silhouette, because we wanted to reference this Brazzos silhouette in the current timeline,” she says.

Only Murders also makes for an entertaining Easter egg hunt for fans to guess which improv riffs make the final cut. Covarrubias found herself ad-libbing, too. “Oliver always likes his dips. ‘Dips for dinner!’ ” she says. She imagined Oliver always at the ready to snatch and conceal tubs of Greek delights, thus ensuring his pants featured a generous number of deep compartments.

For the re-examination of the societal treatment that Pamela Anderson (Lily James) endured after the theft and dissemination of a homemade sex tape made with then-husband Tommy Lee (Sebastian Stan), first-time nominee Kameron Lennox needed to find “a very delicate balance” — because mid-’90s fashion is just inherently funny. “I didn’t want to poke fun at them,” says Lennox. “They had their own unique style that inspired so many people then, and even today.”

Historically accurate wardrobe helped highlight the rapid rise of celebrity obsession, bolstered by the tabloid paparazzi and sea change in media technology. After the VHS tape’s contents are released on the burgeoning World Wide Web, Pam and Tommy attempt an incognito trip to the library to access the internet in the most conspicuous mid-’90s outfits ever: Pam in a pastel blue terry cloth hoodie, cropped track pants by Hard Tail and Christian Louboutin Ugg-style stilettos, and Tommy in monochrome black mid-calf-length board shorts and a flat cap worn askew. “It was a little nod to celebrities trying to hide themselves [from the paparazzi], and that never worked,” says Lennox. 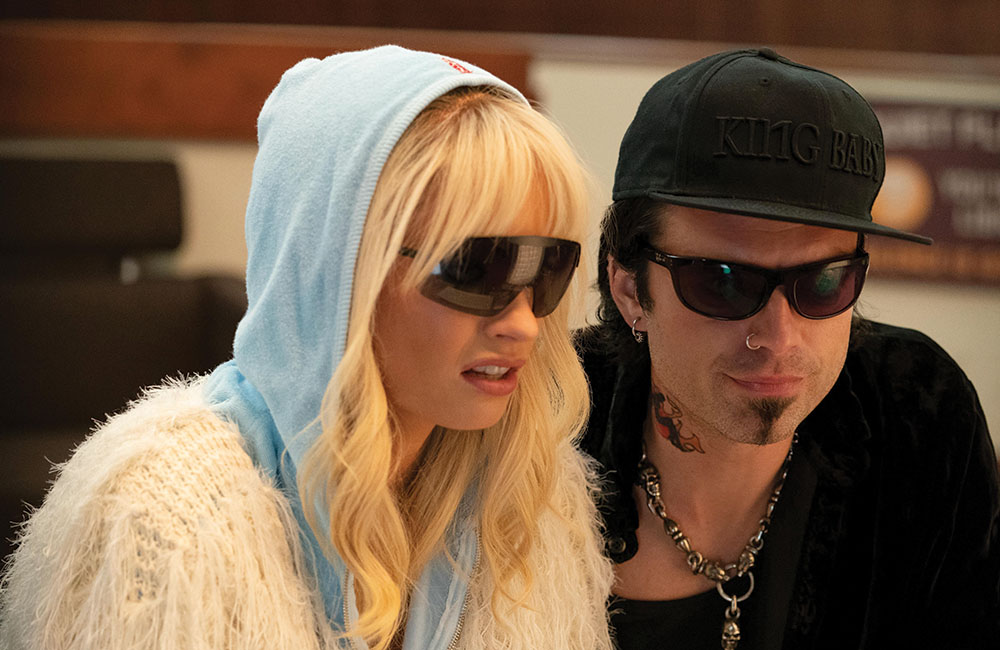 Tommy’s non-acknowledgement of the scandal’s impact on his wife peaks during the premiere of Barb Wire, Pam’s movie-headlining debut. “I wanted to show that he wasn’t getting it,” says Lennox, who dressed Stan in a flashy suit by Fullerton, California-based heritage maker El Pachuco Zoot Suits. “It’s actually bright-cherry red upholstery fabric with flames indented into it,” says Lennox. She imagined Tommy re-wore a mesh tank top saved from the height of his hair-metal fame and notes, “there are flames on the tip of his cowboy boots.”

The ’90s wardrobe also emphasizes how the cruel, misogynistic humor of the era wasn’t funny — as exhibited by a Jay Leno interview, during which Pam maintains her dignity. Lennox found a black spring 1993 Versace dress and customized the decolletage-baring silhouette to fit James’ maternity prosthetic. “It is a testament to her strength and personality that she’s still going to own who she is, no matter what people said about her or how they viewed her, or how society would assume you should look [when pregnant],” says Lennox. “She’s just true to herself.”