by Haley, Nerds and Beyond

At the heart of the film and television industry, the ones working closely with the entire crew to bring the story to life through imagery and art, oftentimes, costume designers are misunderstood.

Helen Huang is a renowned respected designer who has worked on various projects from American Horror Story, Fox’s 9-1-1, as well as reshoots for Birds of Prey: And the Fantabulous Emancipating of One Harley Quinn. Huang chatted with us offering insight into her latest project, Netflix’s Holidate, which stars Emma Roberts, Luke Bracey, and Kristin Chenoweth as well as her career as a whole.

Note: This interview has been edited for length.

Nerds and Beyond: When did you first become interested in costume design?

Helen Huang: So when I was younger, I thought I wanted to go into art, but then my dad was saying maybe something more practical. So I went to fashion design school, but that didn’t really click that much for me. And then I went to art school — originally what I wanted to do was painting and things like that. That really gave me quite an education, especially in history and aesthetics and concepts. And then I interned for Vogue in Los Angeles but it wasn’t until I started to do a few commercials and then someone hired me for a TV show; right when someone hired me for the TV show, I knew that this is what I wanted to do, because I like things with context. So I liked the human aspect of it, thinking about people, society, culture and stories and the clothes to me are sort of an extension of that. So I think that’s why I love it so much, but in a way it was sort of like not a straight road, it was sort of a discovery that took me in and I was very lucky to be at a place in a career that I really sincerely love.

Nerds and Beyond: Working closely with director John Whitesell, were you given creative liberty in the collaboration process?

Helen Huang: Yes. In general, I tried to look for directors that, when they interview you at the same time, you’re looking at them to see if there are people who sort of want the input and the trust of the person that they’re hiring. And John, definitely one of those people, had a specific vision about how comedies look and work. And in a sense, he only said he wants to really celebrate holidays and sort of highlight the fun and joyous aspects of them. He was very trusting and let me sort of put together images for him and work on the characters and then show him pictures. He was very receptive to my creative decisions. And then for the holidays, we looked at the production design aspect of it and came to a place on how it should look depending on the space that they’re in. So it was very great because I love directors who sort of lead you in the vision of the film as a whole, but give you enough room to work on the characters. And then also, and this comes with my personal aesthetics of costuming, I like real representation, I always think that reality is so much more fun than people realize. People are so strange and unique and they bring that to the way they dress. I always love it when I get to be in an environment with a crew and a director who really enjoys that process. 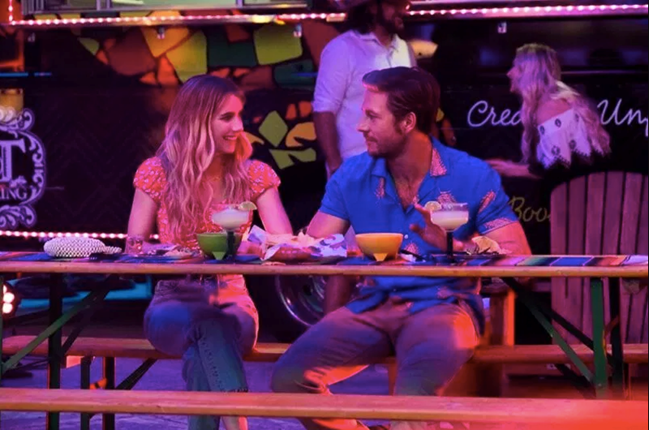 Nerds and Beyond: Something I appreciate is that you worked to make the costumes “effortless,” like Sloane [Emma Roberts] would dress herself, did Emma offer any input in the design process?

Helen Huang: Yes. When I go into fittings, we work with the actor. It’s very, very important to get their involvement and not only because of how they think of their characters, but I tried to talk to her about emotional things, like during different scenes, how she would go emotionally. And so we would try to direct her that way. I think one of the biggest things about costuming that I think a lot of people don’t realize is that clothing without people doesn’t mean anything. So you do need to talk to the actor, they offer heavy input on whether something feels right. It feels comfortable, it feels good for them in the scene that they are playing, and that is the biggest input. But also Emma’s a real dream because I have a huge love of vintage clothing, but also, I like to sort of shop and pick things the way people organically would pick things.

Nerds and Beyond: Are there any pieces that you styled in the film that you particularly love?

Helen Huang: Yes. For Emma, I love, I think this is very strange to say, but I loved everything that she wore when she was around the house. And I think especially she had this like 70s sort of t-shirt dress things in one of the scenes with like a little cartoon character and it said don’t push me. But for me, one of the biggest things on TV and things that have worked in my career is that we’ve come a long way with how women look onscreen. It came from this place of trying to make women look too perfect or too pretty or things like that. They [the characters] are very emotionally attached and Emma’s a dream because she loves vintage — I sent her a mood board and we talked about picking things that are sort of a little bit odd. And I think all those things really helped when we got into the fitting and we started talking about the character. So yeah, there was a very big collaborative process.

So to me, the reason why Sloane’s clothes at home make me feel very happy is that I try to make it like how women would be in their personal space. That was very important to me in terms of other elements that I really like. We bought her a Moschino sweater, and that to me was so exciting because it was hunkered back to something more vintagey and had that feel to it. It was a sweater that could be ugly or could be attached to anything we don’t know until we get it. So to me, those are the best elements. Does this work, does it not work? Is it striking the right balance?

Nerds and Beyond: Was there a balance between the clothes you had to make versus clothes that you could source?

Helen Huang: Well, the one person that had a lot of makes in the film is Kristin Chenoweth, mostly because John’s mil on her was he didn’t want her to feel like — she’s single in the movie — he didn’t want her to feel sad, he really wanted her to feel like she’s good with her life choices. She’s happy and she’s celebrating her choices. And so we did a lot of custom builds from Trashy Lingerie for each of the holidays. All her bathing suits were built by Trashy, all of her costumes. And so we just wanted to sort of extend her personality. Like she’s this person that dresses up for the holiday because she enjoys life, so that we definitely had to make. But in terms of everything else, because it was contemporary, we bought and sourced a lot of those things in vintage shops, we also did a lot of costume house shopping for Sloane’s character. And then the Halloween costumes, that’s where a lot of the makes were coming in because, particularly with women’s costumes, we tried to make it special and sort of tailored to who they are. And so those were heavily all made to create that drama that John wanted for Halloween. 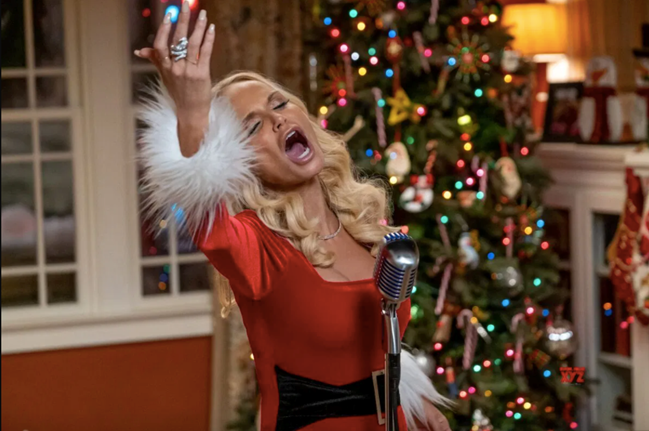 Nerds and Beyond: Did you draw any inspiration from other movies or shows for what you wanted the characters to dress like?

Helen Huang: I did think back to rom-coms where the costumes are things that I enjoy. I think in general, for me, when it comes to dividing the look of characters and things in a film, it’s less about referencing other movies. It’s more about, my original philosophy is generally for any movie, but in reference to rom-coms, from my perspective, I didn’t want to do a rom-com where the girl starts out really sad. And then [saying] “I need clothes” and she needs a guy and then looking completely different. I would think that that is not how women act in real life, and in general not how humans react in real life.  So it was very important to me, especially with Sloane, that we just sort of say, “she’s a girl that dresses this way.” So when she’s sad, she pulls these things out of her closet — you’re in your sweats and t-shirt, but they don’t look different. She doesn’t look like she’s a whole different person.

Nerds and Beyond: Because the film is holiday-centric, did you play on that with the color schemes?

Helen Huang: I led with it being a little bit more saturated and of course with Christmas, we sort of center it around like a theme of the characters in the actual scene. Like, are they a person who really enjoyed the holiday and how would they dress up for those? And so it was more thematic than there is color and as a principle for me, it depends on what the movie is because some movies, right off the bat, the color is very specific. In the production design, it’s threaded throughout and it’s important in the visuals of the movie to end up with the color, so that is something that would be discussed. But with this movie, it was more about who the characters are, and a sort of nostalgia and the thematic representation. So Christmas, obviously, we use a lot of red with Halloween, there was a lot of saturation everywhere. But in general with color, it wasn’t the primary thing in this movie, but in other movies and other projects when they ask for it, that’s what you would sort of focus on first as you’re planning everything.

Nerds and Beyond: What do you like most about working in the design industry?

Helen Huang: I think there’s a couple of things. I think a lot of times people focus on costume designers as if we’re fashion designers and we’re not, we’re not even stylists or people would do editorials, so you have different priorities and it’s almost a different skill. I think the reason why I like design and costume designing is because it has context. So depending on the director or the script that you read, they could reference something from the 60s, they could reference a mood or tone from the 40s, It could be something that they put together from a comic book. And I think I like designing that way because, originally I studied painting so I like ideas before anything else, and then comes the image and the actual design part of it.

So I think for me, I’m very passionate about the process of that kernel of imagination and referencing, and then to the nitty-gritty, cause I’m kind of a nerd. So I try to solve problems and try to figure out what works for a person and what doesn’t. For me, film is probably the only sort of medium that really has all these people collaborating to create art that you’re seeing.

Nerds and Beyond: Do you have any advice to give someone who wants to pursue a career in fashion and design?

Holidate is available to stream now on Netflix.