Gersha Phillips press
Previous
The TV Shows People Streamed the Most in 2020, Featuring Work from Various IA Clients
Next

Last week, we analyzed data from seven different sources in an attempt to unearth the most popular Netflix originals of 2020. Why? Because the streaming industry is purposely cloaked in secrecy, making it difficult for fans and industry observers to properly gauge the success of major titles, and in 2020, streaming TV became more ubiquitous than ever due to shutdowns related to the COVID-19 pandemic. So in the holiday spirit of giving, our goal is to provide a modicum of transparency for interested parties.

One of the trusty sources we turned to was Whip Media’s TV Time, which tracks week-over-week growth in episodes watched for a given program and binge sessions—when four or more episodes of a show are watched and tracked in the TV Time app within a given day—to compile a viewership ranking for the U.S. After providing Observer with key data for Netflix’s prodigious year, the analysts at TV Time turned their attention to the rest of the streaming field. Here’s an aggregate list of the most-watched digital originals of 2020 by service according to U.S.-based TV Time users.

3. One Day at Disney Shorts

4. The World According to Jeff Goldblum

It’s no surprise to see The Mandalorian leading the way for Disney+ given the show’s global popularity. In the first three week’s since the show’s Season 2 premiere, it has ranked third among all SVOD programs in minutes watched, according to Nielsen’s four-week delayed ratings metrics. In that time, the series has generated 2.86 billion minutes watched, or more than 47.6 million hours. TV Time’s Disney+ rankings underscore the service’s thin library outside of The Mandalorian, a point we’ve been highlighting for some time. But as announced at Disney’s massive Investor Day Presentation last week, Disney+ will see a major infusion of blockbuster content over the next two years.

Amazon’s nihilistic superhero series The Boys actually enjoyed a stronger Season 2 launch than The Mandalorian Season 1 and Netflix’s Stranger Things 3. The Marvelous Mrs. Maisel may be Prime Video’s go-to awards contender, but The Boys has quickly become the streamer’s flagship series (warts and all). According to Google Trends, which provides an anecdotal measurement of interest, it left a bigger cultural impact than its digital competition this year. 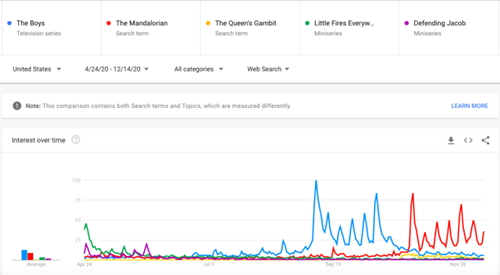 The combination of Reese Witherspoon and Kerry Washington in Little Fires Everywhere proved just as enticing as expected as the series led Hulu’s 2020 original slate, per TV Time data. The Handmaid’s Tale will return for its fourth season in 2021 and has been renewed for a fifth season as well. However, as evidenced by Disney’s Investor Day, the Mouse House is de-emphasizing Hulu, raising questions about the platform’s future even as subscriber projections continue to grow.

Defending Jacob was a solid miniseries buoyed by Chris Evans’ blazing bright star power. The $300 million Morning Show is a splashy headline grabber with Witherspoon and Jennifer Aniston that will soon return for a second season. But Ted Lasso is the feel good series of the year with unrelenting earnestness and optimism that is a much needed respite from the doom and gloom of 2020. Apple seems to agree as it has already renewed the smile-inducing show for two more seasons.

Let’s slow play HBO Max’s 2020 rankings as the service continues to grow following its late May launch. Ridley Scott’s Raised by Wolves is the fledgling streamer’s most-watched original, per HBO. However, Kaley Cuoco’s The Flight Attendant, which premiered just one week before Observer received TV Time’s data, is on pace to overtake it. The series enjoyed the strongest start ever for an HBO Max original, per HBO, with double digit gains in week-over-week viewership from its premiere onward. Let’s check back in a few weeks.

NBCUniversal’s Peacock has a wildly impressive back catalog of pre-existing shows and movies. What it does not yet have, unfortunately, is a library of must-watch original programming (despite the high quality of Amber Ruffin and Larry Wilmore’s comedies). To underscore that point, Brave New World has been cancelled after just one season. A.P. Bio is arguably the most underrated sitcom currently airing, so TV fans should be grateful to Peacock for rescuing it even if it hasn’t tracked in the top five. But as the service is not yet 12 months into its launch, you’d be forgiven for taking advantage of the Free tier and eschewing the Premium original offering to this point.

CBS All Access has been relying on the Star Trek brand as its foundational IP over the last few years. The final frontier will make a good building block for the service’s looming rebrand and expansion as Paramount+, which should bring more franchise content to the platform. But don’t expect ViacomCBS to stray too far out of its comfort zone. There are additional Star Trek spinoff series in the works to further bolster the burgeoning small screen empire.

4. You (Director of Photography: Cort Fey)

This top five above comes from *TV Time, though our Netflix original rankings piece from last week draws from several sources to compose a different collection of the streamer’s most-watched series in 2020. While there is some crossover (hello, Lucifer and The Umbrella Academy), there are also some major differences as well.