"If Anything Happens I Love You," "Canvas," and "Cops and Robbers" explore grieving, a school shooting, and racial murder and injustice.

Netflix has acquired its first animated shorts for Oscar consideration. There are three: “If Anything Happens I Love You,” an elegy about grief following a school shooting, directed by Will McCormack (who wrote the original “Toy Story 4” script with Rashida Jones) and Michael Govier (“Conan”); “Canvas,” about a Black painter who seeks to rekindle his artistic passion after the passing of his wife, directed by former Pixar animator Frank E. Abney III (“Soul”); and “Cops and Robbers,” directed by Arnon Manor (indie web series “Mondays”) and Timothy Ware-Hill (“Kinky Boots” national tour), inspired by Ware-Hill’s poem about the racially motivated murder of Ahmaud Arbery earlier this year in Georgia.

“Our goal is to bring our members best-in-class animation in all types of formats — features, series, adult animation, anime, and short form,” said Gregg Taylor, Netflix’s director of animated features. “Animated storytelling is most compelling when it can transport, entertain, and start conversations; and all three of these short films are beautiful examples of that. While each film is deeply personal and uses very different animation styles, all of them are equally powerful.” 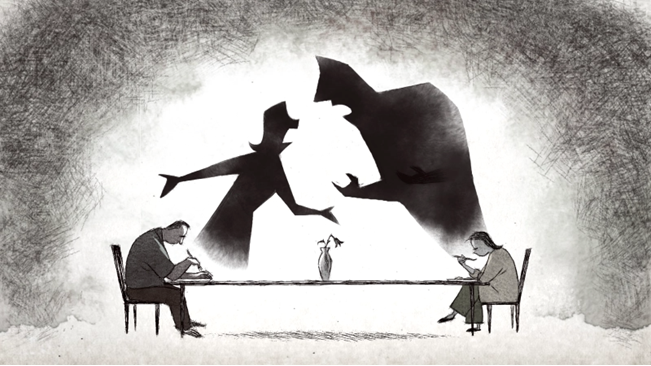 “If Anything Happens I Love You”

In “If Anything Happens I Love You,” a grieving mother and father are visited by shadows of themselves and their deceased young daughter. The monochromatic, hand-drawn short boasts an illustrated style that represents haunting memories, bolstered by an all-female animation team supervised by CalArts graduate Youngran Nho. Laura Dern executive produced the short, which was produced by Maryann Garger (“The LEGO Ninjago Movie”), Gary Gilbert (“La La Land”), Gerald Chamales (“The Irishman”), and Govier.

“’If Anything Happens I Love You’ was created for the ones lost, and the ones left behind,” said McCormack and Govier.

“Canvas” was a five-year passion project for Abney III, also touching on the theme of grief. The wheelchair-bound grandfather loses his inspiration to paint, but, years later, finds inspiration to revisit his craft. Produced by Paige Johnstone (production coordinator on “Soul”), “Canvas” was made by a team of artists working after hours and across three continents. The Black leadership team focused on creating a multicultural production, which embraced the challenge of simultaneously producing both CG and 2D animated sequences.

“We owe it to ourselves and our ancestors to use our gifts to lift and inspire those around us,” said Abney III, who has also worked on “Toy Story 4,” “Coco,” “The Boss Baby,” and “Frozen.” “’Canvas’ is my message to those that have suffered loss and are searching for a way through. In a world where my community must often ignore processing its own tragedies, this film shows that we don’t have to do it alone.”

“Cops and Robbers,” performed by Ware-Hill, made use of a diverse range of animated techniques from more than 30 individual artists, students, and VFX companies from around the world (more than half the artists were Black), each creating a short segment of the poem. It was produced by Lawrence Bender (“Pulp Fiction”), Manor, and Ware-Hill, and executive produced by Jada Pinkett Smith (“The Matrix 4”), Neishaw Ali (SPINVFX president), and Janet Jeffries (Bender script consultant).

The short also contains a portion of the Negro Spiritual, “Soon I Will Be Done,” performed by Brittany Howard of Alabama Shakes.

Ware-Hill and Manor said they made this short “for all the Black men, women, and children who have been victims of racial profiling, police violence, loss of life and other injustices just for being themselves.”