Headlines
Previous
Terilyn Shropshire, ACE and Director Gina Prince-Bythewood on Being Historical Firsts for THE OLD GUARD
Next

It’s 2020 and “Love and Basketball” director Gina Prince-Bythewood has achieved a Hollywood first — she’s the first Black woman to direct an action-comic book film, and her editor, Terilyn Shropshire (“When They See Us”) has the same distinction.

“The Old Guard,” which premieres on Netflix July 10, is based on the graphic novel by Greg Rucka, who also wrote the screenplay. It stars Charlize Theron as Andy, a female warrior leading a group of immortal mercenaries who discovers that someone has found out how to replicate their healing powers. Along the way, Kiki Layne (Nile) also rises up after being mortally wounded during a siege. Andy recruits her to join the team and help in the mission.

When Prince-Bythewood was picked to helm “The Old Guard” for Netflix, her go-to editor was her right-hand woman, Shropshire. Their collaborative partnership goes back 20 years. Prince-Bythewood and Shropshire spoke to Variety about their comic book milestone, their collaboration and breaking down key moments in the film — including a romantic moment where the film’s LGBTQ couple share an intimate kiss.

What did you know about the graphic novel before you started?

Gina Prince-Bythewood: I had no idea about the comic book, but I knew Greg Rucka’s work. Most specifically “Lazarus,” which I loved. I loved the way he wrote female characters in the comic book space, they felt different. When I read the script, I had no idea what to expect, and as soon as I read it, I ran back to read the comic and fell in love with the story and characters even more.

It’s 2020 and here we are, you’re a Black woman directing an action comic book film. How did it come about?

Prince-Bythewood: Another first. I have to give all props to Skydance Productions. They do big movies and really good big movies and they have this property. They loved it, the developed it and they were very intentional on finding a female director. They said, “The reason you’re here and the reason we sent you the script is that we love what you did with ‘Love and Basketball’ and ‘Beyond the Lights’ with the nuance and depth.” They wanted to bring that to “The Old Guard” so that it felt more like an action drama as opposed to a straight action film.

My very first call to Teri. I wanted to make the jump together. In making this big leap, there is an incredible amount of pressure. Not just in being the first, but I can’t fail because that hurts others coming after me.

As a woman, you’re getting this opportunity and as an artist. You’re jumping into something new. There are things I’m learning on the fly, and the first thing you do is surround yourself with great people. I needed the trust to be able to get those daily phone calls that I get from Teri after she’s watched the dailies. She’d say, on a rare occasion, “I don’t think you have this.” I’ll believe her.

It’s scary sometimes and it’s lonely sometimes when you feel like you’re on an island and there’s a ton of pressure but having Teri with me was a godsend.

When looking through the film credits, your post crew features 85% women, can you provide some insight into that?

Prince-Bythewood: I give props to Teri for putting together her group. The heads of VFX and music were female. It just doesn’t happen. It’s so pathetic. The sheer amount of footage this crew went through — these films usually have two editors. We didn’t do that.

Terilyn Shropshire: What was exciting was that I was going to get to take this ride with her. The biggest challenge was getting people to see me the way Gina sees me. As an artist and editor, you want to do everything. You have all these tools in the toolbox and it’s convincing people you’ve got it.

If Gina had not asked me to do this film, this would not have been a film that would have been easy for me on any level to have gotten on my own. That’s where having a relationship with someone like Gina works. She’s standing behind me and she’s also supporting me.

What were the discussions you had around lensing and editing the scene where Nicky and Joe are in the van after being captured by soldiers, handcuffed and sharing an intimate moment about their love for one another?

Prince-Bythewood: That scene was one of the many reasons I wanted to do this film. I loved that relationship. I loved it. It felt organic and real, and that speech was beautiful. Marwan (Kenzari who plays Joe) and Luca (Marinelli who plays Joe) were so passionate about their characters and bringing them to life. They wanted to get it right. We had so many great conversations about the relationship, the depth of the relationship, how long they’ve been together, the fact that when they first got together met each other on the battlefield, homosexuality wasn’t thought of as a sin, it was very out in the open.

Through the centuries that they had been together, religion and governments started to make it a sin and make it seem as if there was something wrong. They wanted to bring all of that to the moment. We had three cameras in that scene and it was a small space.

Marwan and I wanted to get it right and it was 13 takes. I didn’t want to cut around it and piece it together.

It was so beautiful. It was about Nicky taking in the talk. I could have had a running loop at that moment. I think we cut away once to the guard who had started the whole thing. You wanted to keep it intimate. You wanted to make sure you didn’t want it to feel melodramatic. I remember when we had an audience preview and people teared up.

The fight scenes never felt gratuitous. How did you want to frame that first major fight scene in the plane between Charlize and Kiki?

Prince-Bythewood: The best action scenes are those that are character-driven and have emotion to it. Nile is completely freaked out. She’s been kidnapped and shot in the head. She’s scared, angry and wants to be free.

On the opposite side, you got Andy who has this new immortal at the worst time, but she’s gonna test her. She’s gonna see what she’s got and is coming into the fold.

You have two women. Let’s showcase the fact that Nile is a Marine. Andy on the flip side knows every single fighting style throughout centuries. She’s the best fighter in the world.

Nile can’t even punch Andy and throws out her martial arts training and goes back to the streets. Until she gets that one cheap shot and for a moment, it changes. You see how despite getting her arm broken, she doesn’t give up which says a lot about her character.

It took a long time [to cut] because we were trying to find that balance between showcasing the fight and build the emotion in the story. 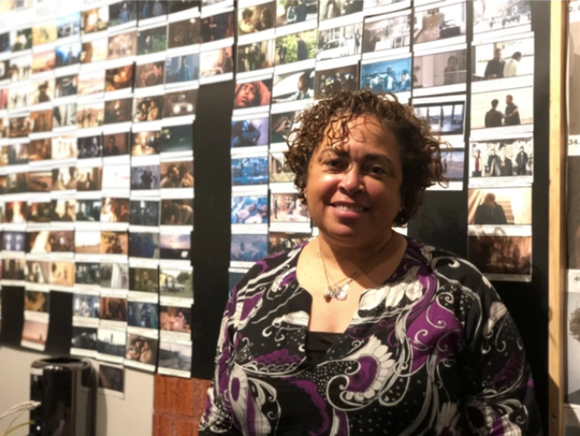