Headlines
Previous
First Trailer for VACATION FRIENDS, Lensed by Tim Suhrstedt, ASC, Shows How Wild John Cena Can Get
Next

It’s not a real vacation without vacation friends.

The straight-laced couple Marcus (Howery) and Emily (Orji) befriend the wild, thrill-seeking partiers Ron (Cena) and Kyla (Hanger) at a resort in Mexico, and the results lead to a raw and raunchy comedy. Living in the moment, the level-headed couple lets loose and takes advantage of a week of uninhibited fun and debauchery with their new “vacation friends,” but months later the couple shows up uninvited at their wedding, creating chaos in their wake and proving that what happens on vacation, doesn’t always stay on vacation.

As the trailer reveals, things are bound to get really wild for Marcus and Emily. From cocaine to magic mushrooms, and maybe even a little swinging — Vacation Friends is a raucous comedy. It may even make you thankful (or envious) that your summer vacation didn’t feature John Cena.

Vacation Friends was one of the productions that were initially halted at the onset of the pandemic last March. It was originally purchased by 20th Century Fox in 2014, with Chris Pratt, Anna Faris, and Ice Cube attached to the project.

Vacation Friends streams globally on Hulu on August 27, with a debut on Star+ in Latin America on August 31. Check out the red band trailer and poster below: 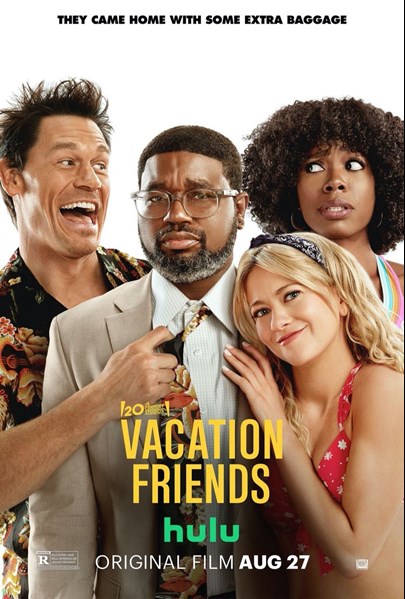